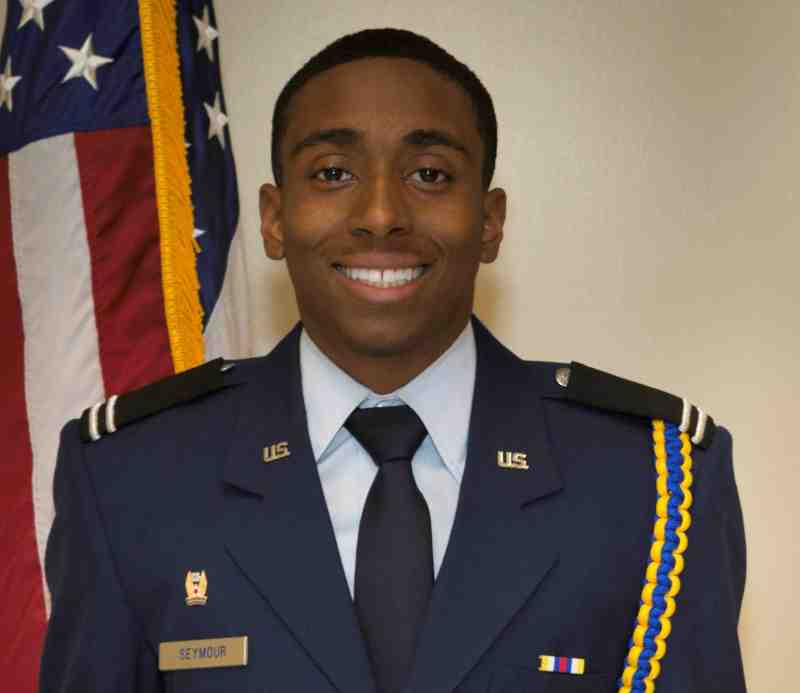 Kyren Seymour's first assignment with the Air Force will be to learn how to operate and manage intercontinental ballistic missiles as a nuclear and missiles operations officer at Vandenberg Space Force Base.

In a sea of caps and gowns, one Mississippi College graduate will stand out from the rest when the dean of the School of Sciences and Mathematics hands out diplomas at 1 p.m. on Friday, May 6, in the A.E. Wood Coliseum.

The Hattiesburg resident’s first assignment sounds even more challenging than earning a degree while completing the AFROTC program: attend technical school to learn how to operate and manage intercontinental ballistic missiles as a nuclear and missiles operations officer at Vandenberg Space Force Base in Lompoc, California.

With Russia’s ongoing invasion of Ukraine and saber-rattling remarks from leaders on both sides of the conflict, it’s an interesting time to be introduced to ICBMs. Seymour understands the gravity of his responsibilities, but his faith will not allow him to become intimidated by world events.

“I’ve been paying especially close attention to affairs in Ukraine, and it doesn’t seem like Russia is going to let up at all,” he said. “At this point, Russia is threatening World War III. Going into this career field is going to be interesting, to say the least. It’s a scary time for all of us.

“We don’t know where this is going, although I’d honestly be surprised if it escalates to something as dire as world war. Nuclear weapons are the option of last resort, but they’re already being talked about. I pray that nobody has to turn that key.”

Seymour is well equipped to handle his new role, according to Lt. Col. Natosha Reed, department chair and professor of aerospace studies and commander of the Air Force ROTC Detachment 006 at JSU.

“While this is a very critical job, Lt. Seymour brings a fresh perspective, an open mind, decisiveness, wisdom, and humility to the enterprise,” Reed said. “We need young, educated individuals who are bold and not afraid to take risks and those that are eager to make a difference in our world.

“Lt. Seymour exudes the core values of the Air Force, which are integrity, selflessness, and excellence. He has a very bright future and there is no limit to the greatness that he will achieve if he continues to work hard and make the sacrifices needed to accomplish his goals.”

Seymour was one of only seven cadets – and the only MC student – to complete JSU’s Air Force Officer Training Corps program this spring. He dedicated three years of his college experience to the program, sacrificing time for early morning physical fitness sessions, leadership laboratories, and community and public service events – all while satisfying MC’s undergraduate degree requirements.

”In my ROTC classes, officers were teaching us about leadership styles, different career fields, and the ways of the Air Force,” Seymour said. “Instead of going into basic training, we got to continue pursuing our degrees while learning how to be leaders in the U.S. military.”

“He consistently scored 95 percent or better on the physical fitness test, which is in the top 15 percent of cadet corps,” she said. “He is a member of the Arnold Air Society, a professional organization within all Air Force detachments that provides more opportunities for Air Force officer candidates to exercise leadership, management, organizational, and public relations skills. And he maintained at least a 3.0 GPA, all while balancing the needs of Air Force ROTC and college.

“We train our cadets to know that good leaders are those who serve. Lt. Seymour serves and leads with excellence.”

Although the Department of Kinesiology’s curriculum might seem to have little in common with Air Force officer training, Seymour credits the education he received from MC for his remarkable dual accomplishment.

“Training to become a missileer requires a heavy academic base,” he said. “I’m going to have to do a lot of studying. I’ve had to do the same thing at Mississippi College.

“By studying for my pre-physical therapy degree, MC prepared me for this assignment, primarily by providing an academic environment and getting me into a rhythm of study.”

He said juggling responsibilities between MC and the ROTC program has been one of the greatest challenges he has faced.

“Not only did I have the responsibility as a student at MC to graduate and earn my degree, but the Air Force was also expecting me to go into the officer career field,” he said. “With AFROTC, you have to take on leadership roles and duties within your detachment, so we can learn within a military environment how to be leaders.

“We’re trained to constantly evaluate ourselves and the performance of the other cadets, and even officers, in our detachment as well. To be an effective leader, you must be able to take criticism. If you can’t, you won’t be able to learn, and you can’t grow.”

During his freshman year, Seymour was a winger on MC’s soccer team and considered majoring in pre-med. He decided against medical school, and became interested in pursuing a career in the military. He landed on joining the Air Force ROTC because it allowed him to complete his undergraduate education.

While serving as the cadet operation squadron commander for the Air Force Reserve Officer Training Corps, Detachment 006, at JSU, he was responsible for coordinating and creating training plans for the Cadet Wing, including writing weekly leadership laboratory operation orders, executing orders in a timely fashion, and working with members of the unit to ensure all duties were fulfilled.

A 2018 graduate of Oak Grove High School, Seymour was selected as a candidate for the Herbert Carter Squadron of the Arnold Air Society during his sophomore year at MC. He has served as the Bravo Flight Commander, Inspector General for Detachment 006, mission support group commander, and operation squadron commander for JSU’s AFROTC.

Recipient of the Field Training Fitness Award, he was named Cadet of the Month in February, and was selected for the Air Force “You Can Fly” Scholarship Program. He attended the Arnold Air Society National Conclave in Washington, D.C. in April, and found time to rack up seven flight hours this semester.

Seymour said he is looking forward to participating in commencement at MC before embarking on his Air Force career.

“I am excited, but also a little nervous,” he said. “This is the culmination of years of hard work, early mornings, late nights, and a juggling of responsibilities. It’s a very special moment for me.”

“To have a young person willing to make the necessary sacrifices to wear this uniform and join the elite 1 percent of our population who choose to serve our country is a tremendous achievement,” Reed said. “He was pushed out of his comfort zone and given different jobs with the cadet corps to lead others and to serve our community. This was a growing opportunity that helped him sharpen his leadership skills.

“This was important, because as an officer in the Air Force, his number one job is to lead.”

Mississippi College's Central Commencement is scheduled for 5:30 p.m. on Thursday, May 5, on the Quad. The ceremony will include live music, special awards, and the Alumni Charge. In the event of inclement weather, Central Commencement will take place in the A.E. Wood Coliseum.

Degrees will be conferred to MC students during their respective schools’ graduation ceremonies on Friday, May 6: the Schools of Business, Christian Studies and the Arts, and Humanities and Social Sciences at 10 a.m.; the Schools of Nursing, Sciences and Mathematics, and Interdisciplinary Studies at 1 p.m.; and the School of Education at 4 p.m.