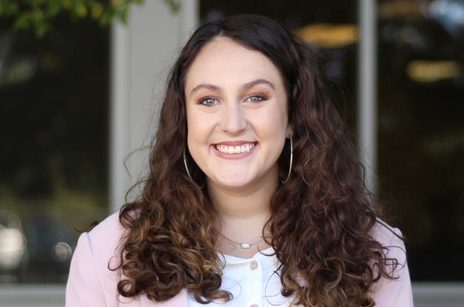 The late U.S. Supreme Court justice, RBG, will continue to inspire people worldwide for generations to come. The Student Bar Association president at the Mississippi College Law School, Allie Rose Parker salutes her many accomplishments and the significant role Justice Ginsburg played in her life.

An Olive Branch resident, Parker, 25, traveled to Washington, D.C. before entering MC Law to hear Ginsburg deliver an opinion in a case before the Supreme Court. The second woman to serve on the nation’s highest court, the Brooklyn, New York native helped break down barriers during her distinguished legal career.

“Ruth Bader Ginsburg was (and still is) one of my greatest role models,” Parker said. Hearing the splendid jurist issue an opinion in person, she said, “was a life-changing experience for me. It helped solidify that there is a place in the legal profession for women.”

There were 58,479 women attending USA law schools in 2018 or slightly more than 52 percent. But the American Bar Association reports women make up only 22.7 percent of the partners in law firms.

Ginsburg, who died in September at age 87 after a battle with cancer, always pushed to see the numbers grow for women in the legal profession. “I’m thankful for her example of kindness and tenacity, and I think so many female lawyers feel the same,” Parker adds.

After earning her MC Law degree, Allie Rose plans to practice in Mississippi and Tennessee. She is interested in criminal law. She presently clerks for the firm of Carmody, Stewart, and Mixon in Flowood.

As the law school's Student Bar Association president, she has set goals in two key areas: inclusivity and mental health. The group recently formed its first diversity and inclusion committee. The group meets weekly to have frank conversations about the MC Law campus and discusses ways to make it an inclusive and welcoming environment for students.

Student leaders will present their plans to MC Law Dean Patricia Bennett and other administrators.

As college students nationwide continue their studies during the COVID-19 pandemic, their mental health has become a significant concern on campuses.

“Mental health advocacy is my absolute passion,” Parker says. “I want to make MC Law a place where students feel that their mental health and overall well-being is prioritized.” Throughout the year, psychologists will serve on multiple panels to lead discussions about the unique experience of law school. A Mental Health Week geared to students is set for Spring 2021.

The former student body president at Delta State University, Parker is thriving in her leadership role at MC Law. She cherishes the opportunities to work with so many caring faculty and staff members as well as committed students.

“MC Law is a place where faculty, staff and fellow students want you to succeed and will help you achieve your goals.”

As a biology major and political science minor at Delta State, Parker attended a career fair. She met then-MC Law dean of admissions Meta Copeland and discovered the school in Jackson would be a perfect fit.

Professor Matt Steffey is impressed with the student leader from DeSoto County in north Mississippi.

“Allie is a talented student with a bright future,” Steffey said. As a member of the law school family, the Mississippian “has shown foresight, leadership and a passion for community building. Allie reminds me how talented and multi-faceted our law students are.”

Allie Rose Parker served as the student director of admissions for just over a year and excelled. “She is a natural leader who can show leadership no matter the task,” says MC Law admissions director Jay Armstrong.

While she enjoys serving as the Student Bar Association president, clerking at a law firm and is staying focused on her studies, Parker finds time to escape. Her favorite hobbies include singing, digital art, taking care of two precious cats, yoga and watching movies.