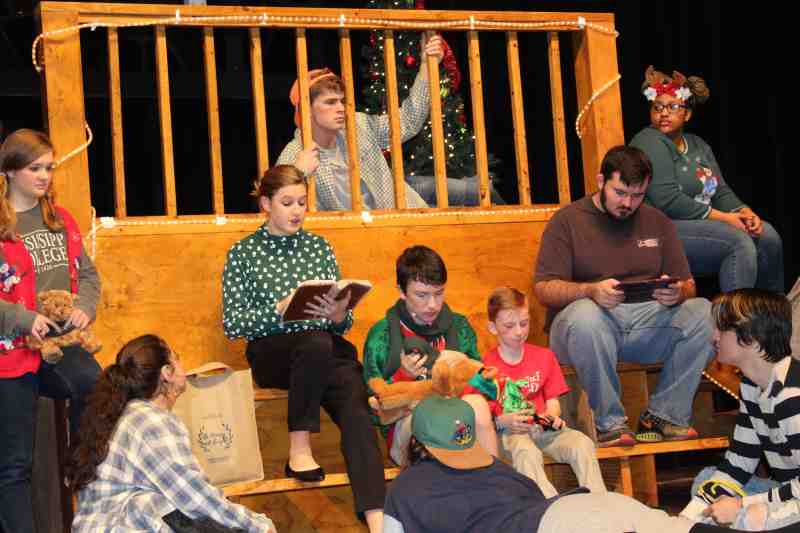 Scenes from MC's 2018 production of "The Best Christmas Pageant Ever.''

For the 12th consecutive year, “The Best Christmas Pageant Ever” will soon bring that joyful holiday message to audiences on the Clinton campus.

Theater patrons will laugh and cry as the rotten Herdman kids take over their church’s Christmas play. Barbara Robinson penned the hilarious production that will be staged again at Swor Auditorium. The dates are December 5-7.

The splendid holiday show is a must-see performance for students from schools across Central Mississippi as well as parents and teachers.

The Communication Department production features a new director this year. Clinton resident Wesley Kinsey, a communication instructor at his alma mater, is thrilled to serve in that role in 2019.

Students always make the play a wonderful tradition on the Clinton campus, he said. The show joins the Festival of Lights in Provine Chapel and the Lighting of the Quad, as the Christian university’s signature events in December.

While the show ignites plenty of laughs, the play emphasizes a serious message, too. “This show is essentially about loving your neighbor and bringing the Christmas story to those who have never heard it for the first time,” Kinsey says.

Wesley feels blessed to succeed retired communication professor Sandra Grayson. The Yazoo City resident did a terrific job as the show’s director the past eleven years.

A native of Sumrall, Kinsey received his bachelor’s degree in English and writing at Mississippi College in 2009. He earned a master’s in English in 2013, and master’s in communication in 2015, both at MC. His wife, Brittany, serves as MC’s assistant director of financial aid. The Clinton couple has two young children.

Wesley is making his return to Mississippi College theater productions. Just a few years ago, he served as a student director and worked on several productions, while attending graduate school on the Clinton campus.

For more information, contact Vicki Williams of the MC Communication Department at 601-925-3229 or vwilliam@mc.edu