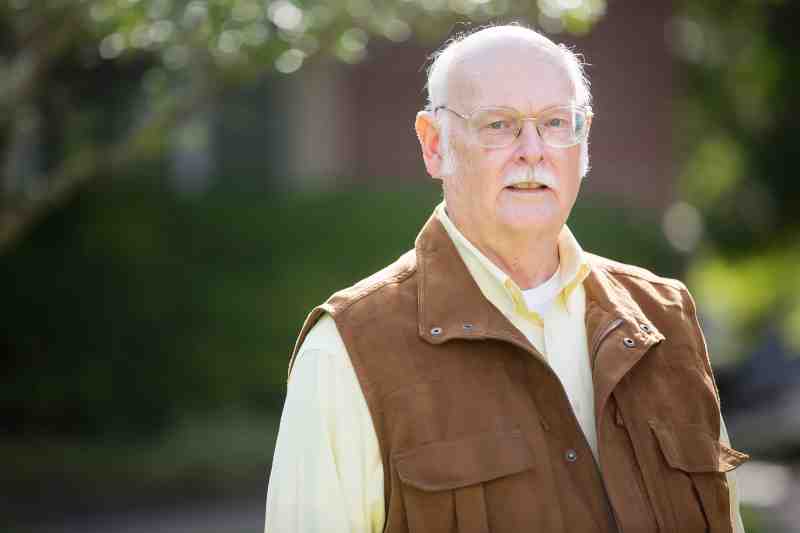 Bill Stark’s splendid career as a Mississippi College biology professor spanned more than four decades. His excellence in teaching, research, and mentoring students is much appreciated on the Clinton campus.

The Clintonian announced his retirement in April, and the accolades keep pouring in.

Dr. Stark “has touched countless lives over his distinguished career, both students and colleagues,” says Dr. Stan Baldwin, dean of the School of Science and Mathematics.

During 45 years, Dr. Stark devoted his energies to education and an immense amount of scholarly research.

“His scholarly passion has resulted in over 240 publications, including journal articles and books,” Dr. Baldwin said. “Dr. Stark is the epitome of the scholar-educator, and his life has been a precious gift to the Mississippi College community.”

Many admirers extended their best wishes to the extraordinary 77-year-old professor at Tuesday’s retirement reception.

A California native, Bill Stark grew up in Oklahoma and earned his doctorate in biological science at the University of Utah. He was teaching high school biology in Duncanville, Texas, before doors opened at Baptist-affiliated Mississippi College. He joined the faculty in 1976.

Over the years, Dr. Stark became a national expert on the subject of stoneflies. Some 3,500 species are described worldwide, and the MC biology professor is familiar with each one.

While stoneflies are large and imposing-looking, these interesting insects are really harmless. Stoneflies spend most of their lives as larvae in the water, crawling along the bottom of streams and rivers. Dr. Stark has described and named more than 400 stonefly species.

Bill teaches courses such as biology for today, ecology, entomology, and freshwater fishes. He oversees independent studies as well. Dr. Stark’s photos have often appeared on the cover or in the text of his research articles.

His fascinating research trips have seen the award-winning educator travel with students to locales stretching from Iuka to Simpson County and along the Mississippi Gulf Coast.

Mac Alford, a University of Southern Mississippi biology professor, fondly recalled those valuable research ventures as an MC student. It was quite a learning experience “going in the field and collecting insects, salamanders, and crawfish,” says the 1997 MC graduate. And spending time in the Hederman Science Hall laboratory was awesome, too. “In the lab, everything was exciting.”

Certainly, his tireless service to the Christian university, scholarship, and students was something his colleagues greatly admire.

“You changed lots of lives,” mathematics professor Melinda Gann told Dr. Stark at his retirement reception. “I’m so happy for you.”

A 2010 MC graduate, Audrey Harrison, sings the praises of her former professor. “Dr. Stark is the single most influential person in my life,” says the research entomologist at the U.S. Army Engineer Research & Development Center in Vicksburg. “He introduced me to the world.”

The Mississippian won’t be completely retired. Dr. Stark will continue with his research and stay connected to a network of scientists worldwide. As for hobbies, he enjoys walking and volunteering at the Clinton Community Nature Center.

His wife, Lida, a retired music teacher at Clinton elementary schools, joined the turnout of admirers, offering their congratulations.

“Thanks to all of you for the memories,” Dr. Stark told students, faculty, and staff. MC has been “a great place to work.”

A member of Northside Baptist Church, Bill Stark has been recognized many times before, including Mississippi College’s Distinguished Professor of the Year.