Centenarian Alumnus Extends Message of Thanks to Mississippi College President 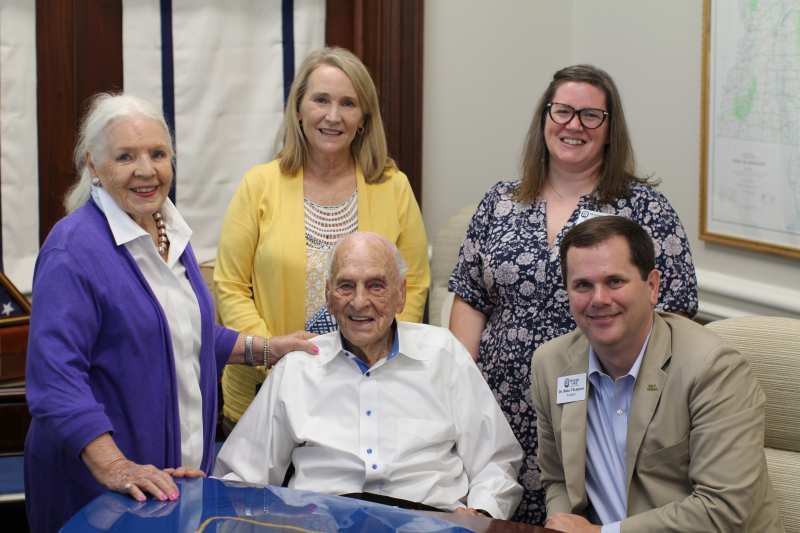 John N. DeFoore Sr., center, a member of the MC Class of 1947, enjoys a lighthearted moment during his visit with MC President Blake Thompson, right.

One of the oldest living graduates of Mississippi College met with MC President Blake Thompson to deliver a simple message: “Thank you.”

“Mississippi College literally saved my life,” said John N. DeFoore Sr., 103, a proud member of the Choctaw Class of 1947 and retired owner and CEO of Consultant Services, a counseling and mental health facility in Boerne, Texas.

Born on June 12, 1919, in Sidon, DeFoore left home at age 17 to work with a highway construction crew. He finished high school and enrolled in Mississippi College, but shortly after World War II began, he was drafted into military service. He was ordained as a Baptist minister in 1941.

DeFoore served seven years in the military, entering as a private first class and being discharged as a major. He received the Bronze Cross for service “above and beyond” during an amphibious landing on Morotai Island, Indonesia.

He returned to MC, was elected president of his senior class, and graduated with a Bachelor of Science degree. He obtained his Master of Theology degree from Southern Baptist Theological Seminary and further studied at New College in Edinburgh, Scotland; Princeton; Harvard; and the Jungian Institute in Zurich, Switzerland.

DeFoore has been listed as a noteworthy management consultant by Marquis Who’s Who, has authored numerous books, and received the Order of the Golden Arrow from MC in 2001 for exceptional performance or leadership beyond the ordinary and outstanding achievement in his profession.

On this return trip to his alma mater – perhaps his last visit to the Clinton campus – DeFoore wasn’t shy about sharing his feelings for the University.

As a young man working a highway construction job with his roommate and “running buddy,” he recalled how the pair got into a tussle at a local establishment. While DeFoore went back to their boarding house, his friend went home, got a gun, and shot himself.

“He and I had been bosom buddies,” DeFoore said. “He had never mentioned suicide – it had never been discussed between us.”

After serving as a pallbearer at the funeral, DeFoore watched as his friend’s casket was lowered into the ground and dirt was tossed into the grave.

“The clods were bouncing off the top of the casket,” he said. “I heard a voice, and the voice said, ‘John DeFoore, you’re a fool. You keep living like you’re living now, in a few years, clods will be bouncing off your casket, and the world will never know or care that you have lived.’

“I went home, packed a small suitcase, and hitchhiked to Clinton.”

He knew of Mississippi College’s reputation as a Christian institution, and signed in as a new student. There was only one problem: he didn’t have the money to attend college.

“I wrote a hot check for my room and another for my matriculation and checked in at Chrestman Hall,” he said. He stayed undercover for two weeks before the bursar, Baylus Richard Albritton, called him out of class and told him he had to withdraw from school.

“I said, ‘Mr. Albritton, the bank made a mistake. Just run the checks back through, and they will be okay.’ That gave me two more weeks.”

DeFoore was in English class when Albritton came calling again.

DeFoore walked the halls of the administration building until he found the president’s office. He knocked on the door and, at Nelson’s invitation, told him his story.

That was how DeFoore became acquainted with the owner of Price’s Dairy, where he milked cows to earn a room and tuition at MC. Later, when he received a fellowship in the Botany Department, DeFoore left the dairy and moved back on campus.

All the rooms in Chrestman Hall were taken, but the matron of the dormitory allowed him to bunk alongside some bags of concrete that had been stored in the basement.

“I felt like a real, 100-percent student,” DeFoore said. But he always dodged Albritton. “He never did like me; I don’t think.”

DeFoore wasn’t a Christian when he came to Mississippi College - “I was very proud of the fact that I was an atheist,” he said – but a young lady in one of the classes he was supervising, Antonina Canzoneri, who would one day serve 40 years as a missionary in Nigeria, made an astute observation about him.

“She told me, ‘Your problem is not that you’re not a Christian. You’re arrogant. You’re proud of your atheism. But John, God even loves proud people.’

“That kind of stung.”

Speaking to him on the front porch of what was then known as “Preacher Row” in Clinton, Canzoneri said, “You’ve missed the biggest sin of your life. You need to come to know Jesus Christ.”

“When I told her that I don’t believe in Jesus, she said, ‘Yes, John, you lie about other things, too.’”

DeFoore then admitted that he wanted to be a Christian, but didn’t know how.

“I’ll tell you,” she said. “It’s very simple. But you’re going to have a hard time accepting this, because John, I don’t think you’ve ever been loved in your life.”

He was musically inclined, so when DeFoore learned that a band on campus paid its musicians $1 for each rehearsal, he quickly signed up.

“What I didn’t know was that it was a National Guard band,” he said.

One day at practice, Mr. Mackey, the leader, announced that the band was being inducted into federal service.

“I didn’t know what inducted meant, and I was not very sure about federal service,” DeFoore said. “Mr. Mackey said, ‘We’re going to Florida for a year’s training.’ I said, ‘I’m very sorry, but I can’t go. I have other plans.’

Assigned to the infantry, he survived three years in the South Pacific, but his traumatic military experience remained with him for the rest of his life.

Once he returned stateside, DeFoore got married and came back to MC. At graduation, he was lined up with his classmates and, as president of the senior class, was prepared to give a speech when his old friend Albritton suddenly appeared.

DeFoore left his place in line and returned to Nelson’s office. The commencement speaker, R.G. LeTourneau, an inspiring Christian businessman and inventor known as the “Father of the Modern Earthmoving Industry,” answered the door.

“I didn’t know who R.G. LeTourneau was,” DeFoore said, “So I went right in. Dr. Nelson looked at me and said:

Nelson wrote a check, and DeFoore took it to Albritton, who “was really peeved because I had gotten the money from Dr. Nelson.”

“I paid him back months later,” DeFoore said.

His relationship with MC presidents has remained strong. Before leaving campus, DeFoore confided in Thompson: ”I found Christ here. I was on the way to Satan and sure death, and I thank God often for this school, this faculty, the student body, and everybody who has kept the school alive all these years.