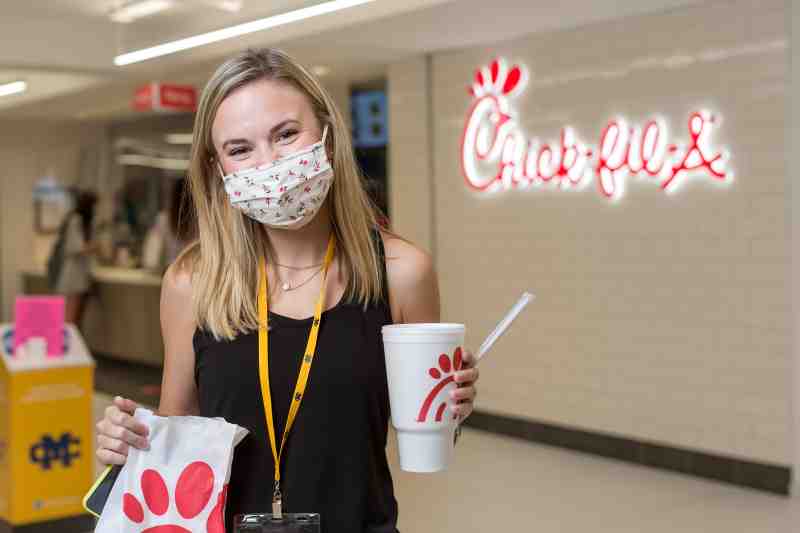 Students lined up and loved the aroma of Chick-Fil-A sandwiches as the restaurant opened at Mississippi College.

“Mississippi Collegian” newspaper editor Kyle Hamrick stopped by between classes for a cookies and cream shake at Tuesday’s opening. “The shake was good, but the overall look of Alumni Hall was better,” said the MC senior from Corner, Alabama. “This is just the welcome back I needed!”

As a steady stream of customers gathered on day one, it’s obvious the new Chick-fil-A will be a hit on the Clinton campus.

MC senior Austin LaBrot loved seeing all the improvements at Alumni Hall to make way for Chick-fil-A. “I like the new, clean layout of the Commons.” A cookies and cream milkshake is the go-to CFA treat for the Illinois native.

A few miles away, Clinton already is the home of a popular Chick-fil-A along U.S. 80

“Dr. Thompson has always been a big fan of Chick-fil-A, so it’s no surprise that he is so excited,” says MC senior Michael Washington, Jr.

The Student Government Association president, Washington is pumped, too. The Lauderdale County resident believes the new eatery in a renovated Alumni Hall will enhance the experience for all Mississippi College students.

“Having Chick-fil-A on campus will only better exemplify why MC is such a great university to attend,” says senior Damon Wright.

The Alabama resident salutes President Thompson for going all out to attract Chick-fil-A and seeing it happen in the summer of 2020.

“His dedication to bringing Chick-fil-A on campus is a huge step for MC,” says the Choctaws football player. “He has not only given the university the opportunity to better its fellowship. He has partnered with a great company that shares a similar stance in faith and being servant-driven in all facets.”

During Dr. Thompson’s Spring 2019 inauguration week, Damon recalls the president delivering an inspiring food-related message. Speaking to a packed crowd in Provine Chapel, the MC leader highlighted the importance of people building friendships, while they fellowship over a good meal.

“Chick-fil-A is going to be glad they came to MC,” said English professor Steve Price. “We love good food here.”

One of the professsor’s CFA favorites is the spicy chicken sandwich for lunch. “A little Louisiana-style flair coming to Clinton is a good thing,” adds Price, director of the university’s Writing Center.

Faculty and staff are eager to join students as Chick-fil-A customers. During the pandemic, social distancing rules will be part of the university’s health protocols.

Boosting Mississippi College food options will be a new Einstein Bros Bagels opening in late September. It will be located just a few steps away from Chick-fil-A in Alumni Hall.

Bringing a Chick-fil-A to the campus will be a plus for university recruiters.

“Our prospective students have been chomping at the bit about the new CFA for a year,” says Michael Wright, director of freshmen recruitment and undergraduate admissions. “So I’m thrilled to see it finally come to fruition.”

As a new restaurant attracts customers year-round, it will change the way the Mississippi College graduate conducts business. “I can’t wait to take prospective families to lunch” at Chick-fil-A.