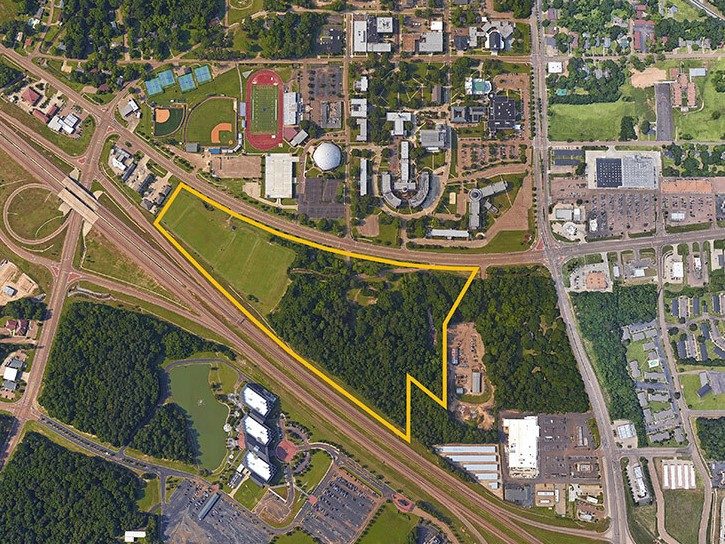 The yellow box in this aerial photograph indicates Mississippi College land that will be developed as part of the project.

An $8 million legislative grant obtained by this public-private partnership will soon lay the groundwork for long-desired mixed-use retail, restaurant, commercial, and professional space between Highway 80 and Interstate 20 west of Springridge Road in Clinton.

The initiative was championed by long-time Clinton Representative Philip Gunn, who also serves as Speaker of the Mississippi House of Representatives. Incorporated into House Bill 1353, this funding will support the costs associated with site work, construction, and development of streets, street lighting and signals, electrical and communications distribution systems and equipment, water and sewer system infrastructure, and related infrastructure on the property.

The project, a partnership between MC, the City of Clinton, and Ben Walker, a local developer and business owner, is set to turn the property into an upscale attraction for shoppers, foodies, and entrepreneurs. It may attract retailers, restauranteurs, grocers, bankers, and hoteliers from throughout the Southeast.

Walker will contribute a parcel of land directly to the west of Springridge Road and north of the Springridge Shopping Center. The University will provide the lion’s share of the property, bounded to the west by the Choctaws’ practice football field. Merchants and other occupants of the development will lease space from the partners, who will maintain ownership of their respective properties.

Dr. Blake Thompson, MC President, said the development will benefit all those working and studying on the Clinton campus and will enhance recruiting efforts for the state’s oldest institution of higher learning.

“This project has been dreamed about for a long time,” Thompson said. “I’m grateful to the City of Clinton, the state of Mississippi, and Ben Walker for joining with us and taking the first step toward making the development a reality. The Speaker, Mayor Phil Fisher, and the Board have been remarkable partners in their support throughout this first stage of the project.”

The first phase of the project will encompass about 45 to 50 acres, stretching from Walker’s acreage adjacent to Springridge Road and University property up to a line roughly parallel to Capitol Street. The second phase, expected to begin in about three years, will develop the remainder of MC’s land south of Highway 80.

Robinson Spring, a natural water source that has served the people of Clinton for generations, will be preserved, and its historical significance will become a feature of the development. Likewise, the Leake Family Cemetery, located in the northeast corner of the property, will be maintained.

Dr. Lloyd “Bo” Roberts, former dean of business and special projects manager in the Office of Business Affairs at MC, and a member of the project committee since its inception, watched as the first trees were removed from the property July 19.

“That place is going to look a lot different a month from now,” said Roberts, who has been involved in acquiring and maintaining land in the area on behalf of the University for more than 20 years. “We’ve always thought the property would be good for development.”

The Clinton Board of Alderman voted July 19 to approve the conceptual plan for the development. While the city would reap financial benefits – along with additional sales tax from new businesses, an enhanced property valuation of the area would result in a much larger ad valorum tax – Chip Wilbanks, a member of the board and an MC graduate, said the development would provide a distinctive visual element for Clinton.

“While it will be exciting for those who live here, we hope to attract visitors as they are passing by on the Interstate, and we hope those living in the Jackson metro area will make an intentional effort to come to Clinton,” Wilbanks said.

“This has the potential to be the greatest and most significant development in the City of Clinton in my lifetime.”

Wilbanks said the board’s unanimous approval was indicative of the support the project has enjoyed from city, state, and University leaders.

“I couldn’t be more thrilled about this development, and it’s clear everyone on the board is excited as well,” he said. “It’s a great example of how Mississippi College and the City of Clinton can work together to make improvements that benefit both parties. MC is such an integral part of and an anchor to our city – they’re so intricately entwined that anything that benefits one is great for the other.

“It’s great to see us working together so well.”

Walker said the development’s accessibility to the Interstate – the property is located between two exits on I-20 – is another prime indicator of success.

“This has been a very underdeveloped piece of property for a long time,” Walker said. “We feel there’s a need for upscale retail in Clinton. If we can land the right type of stores and restaurants, it will give the citizens of Clinton a place to shop and eat without having to go to other communities. In turn, it should help the college greatly with prospective students.”

Roberts agreed. He sees the development as a valuable recruitment tool for the University.

“The college will have an attractive area that will help support its faculty, staff, and students,” he said.

“Potential students and their families visiting our campus may be able to stay in a nice hotel across the street, eat at upscale restaurants, enjoy pedestrian-friendly walkways, and shop in stores attractive to the students.

“The idea is to build an upscale development that will enhance the reputation of the college and the city. President Thompson has a great vision for this space. He’s created a lot of interest from outside businesses that would like a spot on this property. We’re on the verge of developing something that will enhance the city like never before.”