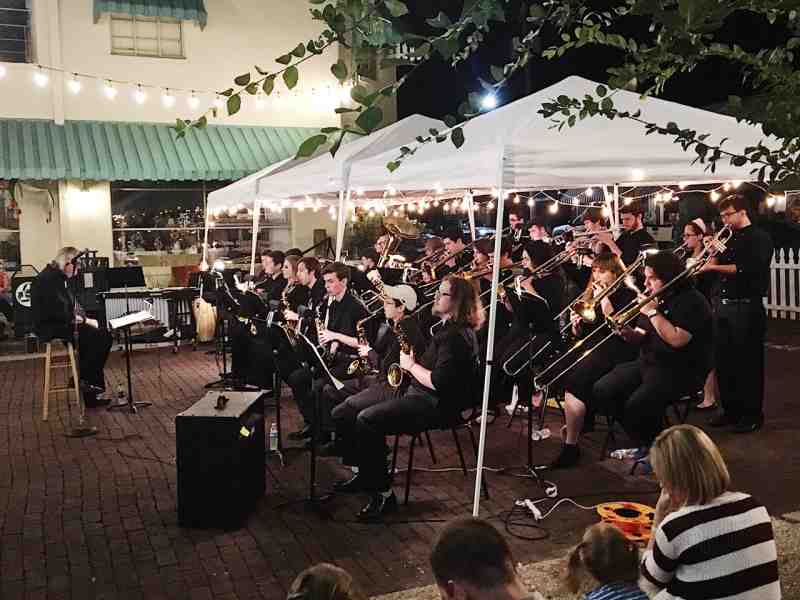 While Mississippi College’s Jazz Band cannot compete with those pioneering performers, their modern music sounds pretty special. Clinton area residents are invited to hear the talented student musicians during a free concert along the Brick Streets on October 12.

The program begins at 6 p.m. and runs until about 8:30 p.m. that Friday evening.

The MC band will set up on Jefferson Street across from City Hall. Music fans are encouraged to bring their lawn chairs, sit back and savor the jazzy sounds – from the Swing Era to the present day.

“This is always a fun, hometown event under the stars,” says Dottie Serio, the MC Music Department secretary. “I have gone several times and feel like I have become part of a Norman Rockwell picture – small town America at its best!.”

As music fills the Fall air, concert-goers can dine at restaurants in Clinton’s historic business district. Food trucks will be set up nearby the concert that’s just a short walk from the Clinton campus.

The MC Jazz Band consists of several newcomers as well as returning students.

Mississippians include saxophonist Jacob Allen of Jackson, a Terry High graduate. Trombone players include Jonathan Johnson of Clinton, Bryant Thaxton (Jackson Academy grad) of Raymond, and Josh Waldbieser of Cleveland. The rhythm section includes Cailtin McCormick of Bruce on piano and Austin Toler of Madison on drums. Anastasia Crout of Lake and Levi Perkins of Senatobia are both featured on trumpet.

Other student musicians hail from more distant places. Saxophonists Nathan Schultz is from Whittier, California, while Isaac Tan lives thousands of miles away in Malaysia. Trombonist Christa Mullholand is a Clearwater, Florida resident, while MC senior Alex Rodriguez is from Houston, Texas.