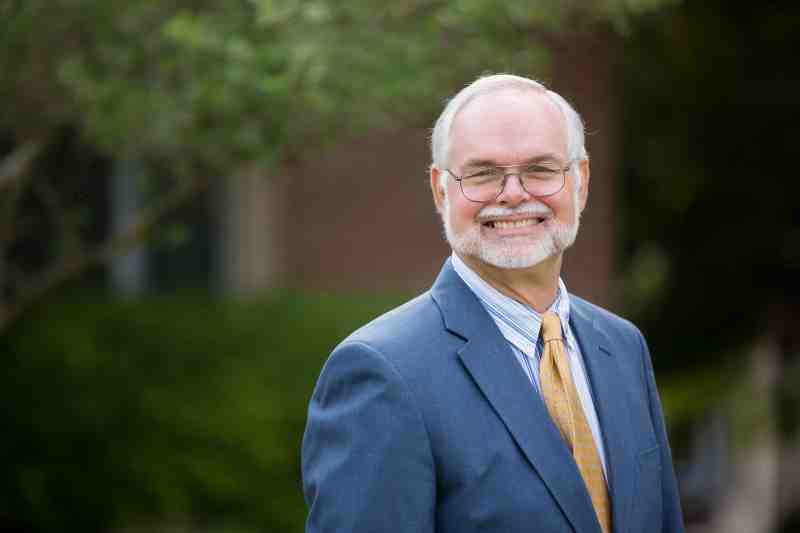 Dr. Cliff Fortenberry, professor of communication, was surprised to learn the department's Distinguished Alumnus Award had been renamed in his honor.

After 35 years of service to the Department of Communication at Mississippi College, it was a singular honor for Dr. Cliff Fortenberry to watch his own son, Dr. Ryan C. Fortenberry, associate professor of chemistry at the University of Mississippi, receive his department’s Distinguished Alumnus Award.

But what immediately preceded the presentation caught the elder Fortenberry off guard: Dr. Reid Vance, assistant professor and chair of communication at MC, announced the award would henceforth be named the Cliff Fortenberry Distinguished Alumnus Award.

“It’s unusual that folks can surprise me, but they did,” said Dr. Cliff Fortenberry, professor of communication and former chair of the department. “The real nice thing was everybody in my immediate family was there – everyone, except the dog.”

Vance had been in cahoots with the Fortenberry family for days leading up to the presentation, which gave MC faculty, staff, and friends an opportunity to honor both father and son for their illustrious careers.

“By attaching his name to an award that will be given out every year, and for the first recipient (under the new name) to be his son, seemed like the perfect opportunity.”

Vance had contacted Dr. Cliff Fortenberry’s daughter, Elizabeth, to make sure all of the family members could be present for the ceremony and asked her to keep the announcement a secret. It even eluded the award recipient, who credited his father for helping to guide his career, even at an early age.

“When I was growing up, I lived in the Department of Communication at MC,” Dr. Ryan Fortenberry said. “I was often in the back of his communications law or mass media class sessions, drawing or making paper airplanes. I had a happy childhood, and MC was an integral part of that.

“Dad has given his life’s work to building, growing, developing, and keeping the Department of Communication going at MC. The naming of this award after him is fitting and deserved.”

Dr. Ryan Fortenberry said being the first to receive the award under the new moniker makes the honor exceedingly special to him.

“Dad has always been my best buddy, and I’ve wanted to make him proud,” he said. “I know that he is proud of me, and I’m also so very proud of him. The naming and receiving of this award are, in so many ways, an additional extension of our relationship built on love and sustained on mutual support, encouragement, championing, and faith.”

Although he chose a different professional path than his father, Dr. Ryan Fortenberry credits the instruction he received in MC’s Department of Communication for laying the groundwork for his successful career in science academia.

“The so-called ‘soft skills’ of scientific research are no longer soft – writing, speaking, and promoting research,” he said. “These are essential for a successful career in science. This is what the Department of Communication at MC taught me.

“My father encouraged me early in my academic career to keep these communication concepts in mind.”

A former editor of the Collegian who was also a member of the debate team, theater, and public relations at MC, Dr. Ryan Fortenberry said his father also gave him the opportunity to teach an online science communication course at MC, the first course of its kind in the state, that has been added to the curricula at other universities.

“We had known about his track record of academic work for a long time,” Vance said. “It’s extremely impressive. We wanted to honor him for his accomplishments, and we also wanted to make sure our current students understand you can get a communication degree and become an outstanding educator and an outstanding scholar. His resume speaks to that.”

For his part, Dr. Cliff Fortenberry, who initially interviewed for his position at MC on the day Dr. Ryan Fortenberry was born, puts all the credit for his son’s success on the junior Fortenberry’s shoulders.

“When someone is as active in academia as he is, and someone has accomplished as much as he has in a very short time, it’s a testimony to his persistence and his dedication to his craft,” Dr. Cliff Fortenberry said. “Of course, we’re very proud of him. I think this award is a testimony to him wanting to be a good science communicator. We would like to think that we at MC had some small part in his success.”

Although his department’s Distinguished Alumnus Award will carry his name in perpetuity, Dr. Cliff Fortenberry is even more proud of another legacy achievement – the majority of the many degrees awarded to members of his family have come from MC.

“In our family, Mississippi College has played a major role in the educational achievements we’ve all had the opportunity to have,” he said. “In many ways, the award for Distinguished Alumnus is a continuation of their efforts along the way.

“So maybe the Fortenberry name will be carried on for the next several years for those who accept this award.”

Vance said Dr. Cliff Fortenberry has more than lived up to his family’s legacy.

“For over three decades now, he has been a professor in our department who has been greatly respected, not just by his colleagues, but by his students,” Vance said. “He has a reputation as being tough, but fair. His students are more knowledgeable about the subject matter and better communicators because of that.”

“We are an MC family. We have been for generations,” he said. “My father, though, has had the largest and longest association with MC. This award being named for him is a small means of acknowledging me, our family, and, most notably, my father and what MC has meant to him and to us.”