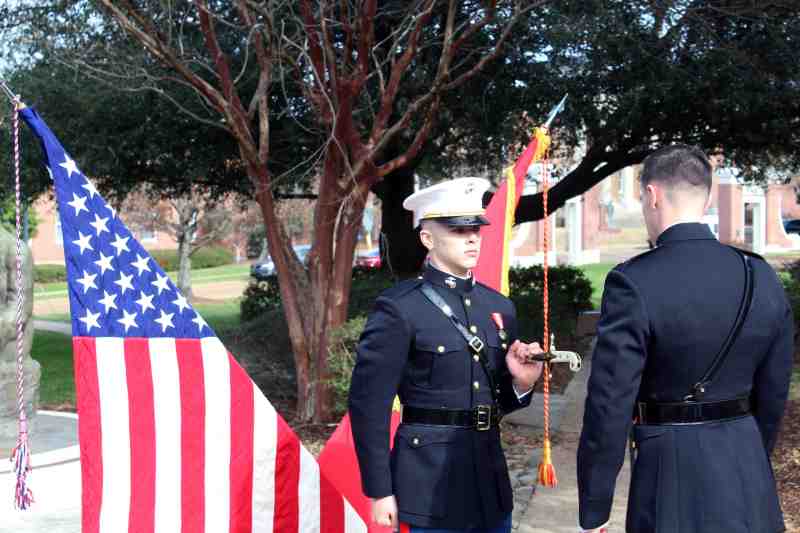 Mississippi College Christian Studies graduate Cooper Chavis, 22, (Class of 2019) is bound for the Marine Corps with six months of training ahead as an officer.

Semper Fidelis or Latin for “always faithful” proudly serves as the U.S. Marine Corps motto since 1883.

One of the latest to offer his faithful service to the USA as a young Marine Corps leader is new Mississippi College graduate Cooper Chavis.

His hard work, determination to succeed and solid commitment to the Marine Corps were all showcased during a special ceremony on the Clinton campus December 20.

A Christian Studies major, Chavis graduated from Mississippi College with a bachelor’s degree that Friday at the A.E. Wood Coliseum. In a separate ceremony near Provine Chapel, the Grenada resident was saluted for taking the steps to becoming a Marine Corps officer. The 21-year-old Mississippian was commissioned a 2nd Lieutenant.

Last summer, Cooper completed ten weeks of Marine Corps training in Quantico. He returns to the same military base in Virginia to begin a more intense six-months of training. Beginning May 4, 2020, the new training in Quantico offers plenty of challenges. Officials describe it as Officer Candidates School on steroids. It emphasizes everything from perfecting rifle skills to swimming laps to developing leadership skills.

Serving in a leadership role at a sports ministry camp Kids Across America almost two years ago is what convinced the MC student to pursue the military. “I grew a passion for serving those who serve. The ultimate opportunity for a willing and able single male arose: the United States Marine Corps.”

What attracted the Grenada High School graduate to Mississippi College?

Playing football for the Choctaws as a freshman was among the chief factors. So was the university’s Christian Studies program combining with the institution’s nurturing spiritual atmosphere.

After playing football for Coach John Bland as a freshman, Cooper Chavis didn’t return to the team for his sophomore season following shoulder surgery. After initially thinking the military wasn’t for him, he had a change of heart.

Mississippi College leaders applaud his pursuit of military service. They predict many achievements are in store for the young man at the beginning of a new decade.

“Cooper Chavis is mature beyond his years,” says Wayne VanHorn, dean of the MC School of Christian Studies and the Arts. “He is dedicated to God, to family and to country. He is smart, kind and dedicated. God will use him in great ways.”

Burn Page, chair of the Department of Christian Studies, agrees. “Cooper has been an outstanding student. I am proud and thankful for his dedication and commitment to his Lord. I know he will serve with distinction in the Marine Corps.”

Commissioning as a 2nd Lieutenant is a big bold accomplishment on his journey.

It permits him, Chavis says, “to be a servant leader for America’s chosen few: the United States Marines.”

For the next four years in the Marine Corps, Cooper wants to set a high standard for others to see. “For much like I fell in love with the goodness of God, I hope others will see the same love reflected in a life of faithful service.”

For 244 years, the Marine Corps served America in military battles. As part of their mission, the soldiers offer humanitarian and disaster relief when needs arise.

After completing his Marine Corps duties, the Mississippi College graduate seeks to pursue a career in vocational ministry with the same passion.