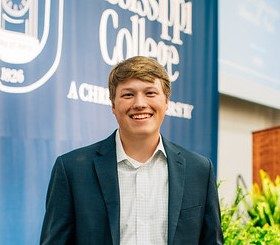 Mere weeks after graduating from MC, Davis Barnes is earning a reputation among his coworkers at GranthamPoole PLLC as a dependable worker with strong communication skills.

The ordered beauty of mathematics may have drawn Davis Barnes to accounting, but meticulous critical thinking has become his career path.

The 2022 Mississippi College graduate is using the problem-solving skills he honed as an accounting student in the School of Business to make his mark with GranthamPoole PLLC in Ridgeland.

A native of Leesburg, Barnes received his Bachelor’s of Accounting from MC last May. As a staff accountant, he is now responsible for mastering the preparation of lower-to-mid-level individual and business income tax returns for his new employer.

“I really love it here,” Barnes said. “GranthamPoole cares a lot about its employees. That makes me care a lot about what we do. I have a lot to learn – tax laws and regulations change every year – and I don’t think I’ll ever stop learning.”

In less than two months on the job, Barnes is already drawing raves from his new employers. His supervisor, Lacie Myers, said he has just the right temperament for his occupation.

“Davis is very patient and easy-going,” said Myers, CPA, a partner at GranthamPoole. “This will help him navigate and prioritize his work as he takes on more and more responsibility.

“GranthamPoole, PLLC prides itself on having a staff that really care about our clients and one another. Davis’ character fits right in with our firm mentality. We are happy to have him.”

After a year at Hinds Community College, Barnes followed his twin sisters to MC, where he became immersed in the Christian University’s culture.

“I knew Mississippi College was where I would end up, even while I was at Hinds,” he said. “Meeting the people at MC and taking in the atmosphere at Derby Day, football games in the fall, and other events, and seeing how genuine everyone was, drew me in.

A member of Phi Theta Kappa, he joined Civitan men’s social club, serving as treasurer his senior year. He served on the Welcome Week crew and was eventually chosen to become welcome director for Orientation and Welcome Week 2021. He also served on the Campus Programming Board Committee.

Jonathan Nutt, assistant dean of students at MC, marveled at his ability to manage budgets for both Orientation and Welcome Week.

“He was meticulous with the numbers and made sure everything stayed up to date so that we could make the most out of every dollar,” Nutt said. “I know Davis is just as meticulous in his role as an accountant.”

Chip Wilson, associate director of student engagement at MC, who worked alongside Barnes when he served as Welcome Team director for the 2021 school year, described him as a problem-solver who encourages those around him.

“Davis is one of the hardest workers I know,” Wilson said. “He is diligent in ensuring he is doing things correctly and wants to make sure he does not cause other people to have to do more work.

“When I think of Davis Barnes, I think of his willingness to help others regardless of the task, and he always did so while laughing or smiling. Davis is one of the most competent and helpful student leaders I have had the privilege of working alongside, and I know MC has been bettered because of his involvement on campus.”

In the School of Business at MC, Barnes learned that accounting is less about raw numbers and more about finding the small problems that can make a significant impact on the ledger.

“That’s what made me stay in accounting – I enjoy figuring out what went wrong,” he said. “That’s what gave me the desire to become an accountant.”

His first real taste of the profession came during an internship at a small accounting firm in Brandon, Barlow & Company, PLLC. Surprisingly, a heavy dose of tax accounting didn’t prove a deterrent.

“I did a wide variety of bookkeeping, individual taxes, and even a few audits,” Barnes said. “I enjoyed my time there. It gave me a wider look at things, and it helped me decide to pick tax – l like the organization of it.”

A job fair at MC introduced him to GranthamPoole, one of Mississippi’s largest regional accounting firms. The result of a 1999 merger, the company’s core values mirror those of Mississippi College: “to be a family who honors and serves God by serving each other, our clients, and our community with trust, integrity, and excellence.”

“I was very impressed by him,” McCallum said. “Whenever I’m recruiting accounting staff, I look at a number of factors. Of course, I review their academic record, but I’m probably more impressed with a strong work history and communication skills. Davis has both, and that will serve him well.”

That introduction led to a job interview, and Barnes performed well enough to be added to GranthamPoole’s roster of highly trained accountants – many of whom earned undergraduate degrees from Mississippi College.

“We have a strong contingent of MC graduates,” said McCallum, a 1998 alum. “Going back to my days at MC, I felt like the faculty prepared me for the CPA exam and for life in the profession. In the years since, I’ve observed that MC grads are well suited for the world of work and have some very high performers in their ranks.

“I have high hopes that Davis will continue this long tradition.”

Barnes was one of three new MC graduates the firm welcomed this year: Traylon Lewis and Mackenzie Jones were also hired as staff accountants. Barnes said being surrounded by MC alums provides a degree of comfort in his new position, but challenges him to elevate the expectations he places on his work product.

“It gives me peace of mind that many of my colleagues have a similar educational background and have been here for a while,” he said. “I hope within a year or two to attain the knowledge they’ve gained.”

Nutt said he isn’t surprised by the success Barnes has achieved so early in his career.

“Davis is a compassionate person who cares about the experience of other student,” Nutt said. “That’s one of the reasons he made a great student leader. He was always able to think how other students would be affected by our decision-making. Davis also puts in the effort needed to make organizations and events successful. And most importantly, Davis is a kind person who cares about those around him.

“He is one of those people who is always tending to things in the background that many don’t think about. He makes sure things are running smoothly so that others can enjoy themselves. I’m so thankful I had the chance to get to know Davis and have him be a part of our several teams and lead as well. MC is very lucky to call him an alumnus.”

The sense of community that attracted Barnes to MC is alive and well at his home church, Grace City Church in Jackson. He attributes the congregation for helping to keep him grounded during his transition from being a student to becoming a professional.

“At MC, everywhere you turn, you have a group of friends who know you,” he said. “Grace City Church has helped me maintain a community in my day-to-day life.”

While Barnes has his hands full with his job responsibilities, he continues to look for ways he can contribute to the firm in the future.

“I’ll be looking to get my CPA in the coming months,” he said. “That will help me make more of an impact on the things that I do for GranthamPoole. While I enjoy tax, I want to be open for potential opportunities for audit in the future.”