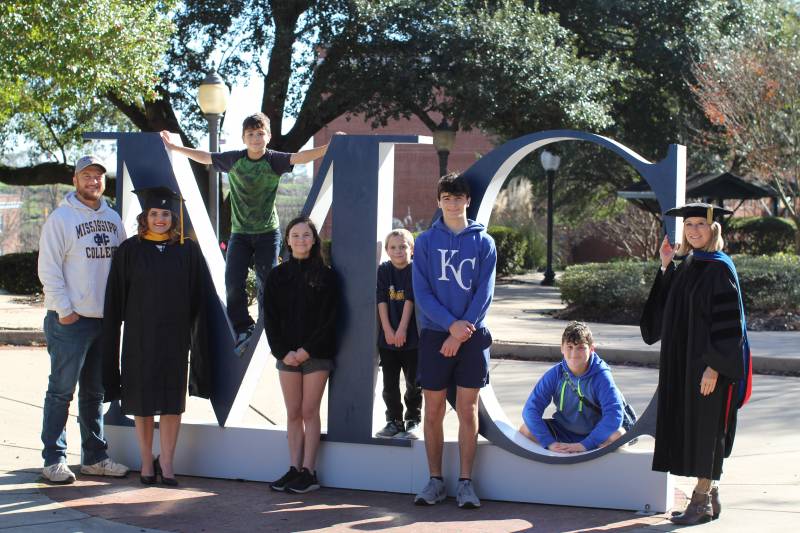 Shortly after their overnight journey to Clinton, the Buntin family, from left, Chris, Ashlea, Riley, Aubrey, Caden, Dakota, and Christian, were treated to a tour of the Mississippi College campus by Debbie Norris, MC associate provost, graduate school dean, and Ashlea’s faculty advisor.

At midnight on Dec. 15, 2022, Ashlea Buntin and her husband piled into the family van with their five children in Winston-Salem, North Carolina, to begin an 11-hour trip to the Mississippi College campus.

The Buntins didn’t drive through the night for a college recruitment trip or to move to Clinton. They journeyed more than 700 miles so Ashlea could receive her Master of Science in Higher Education Administration – in person.

When the sleep-deprived family rolled onto the MC campus late Friday morning, they were delighted by what they saw.

“It is a beautiful campus,” Buntin said. “Just looking at the different buildings, you get a sense of the rich history here. It has a very homey feel.

“Being on social media and after seeing pictures online, now that we’re here, it feels very familiar.”

Like the majority of her classmates in MC’s graduate programs, Buntin is a true blue “21st Century Choctaw” – that is, an alumna who, in the digital age, earned her degree from afar. Debbie Norris, MC associate provost, couldn’t have been happier to see Buntin in person.

“She and I had regular communication,” said Norris, who served as Buntin’s faculty advisor and taught several of her classes. “I felt like I knew her, although we had never physically seen each other. She had never seen Mississippi College, but walked across the stage the following day at her graduation and received a well-deserved master’s degree.

“I’m so proud of her and her accomplishments!”

“I’m very proud of her,” he said. “I know how hard she worked for this. She has always worked for everything she’s gotten. She has had a very good experience with Mississippi College, and they have bent over backward to get her everything she needed to succeed.

A native of Biloxi, Buntin was a junior in high school when her family moved to Missouri. She met her husband while earning her B.S. in business administration, majoring in management and human resources, at Columbia College in 2009. Buntin was serving as financial aid director at William Jewell College in Liberty, Missouri, when she sought to advance her academic credentials online like many professionals.

“I was specifically looking for Christian liberal arts schools that had my degree program,” the first-generation student said. “Christian education was important to me. I had never heard of Mississippi College until I started researching schools online.

“It came down to MC and another school in Texas, but Mississippi College had the Christian component, and it was affordable, so I applied.”

The demands of motherhood and a full-time work schedule often challenged her ability to find time for studying. While pursuing her advanced degree, she also underwent a career change: she moved to Winston-Salem to serve as associate director of financial aid in the School of Business at Wake Forest University.

Despite relocating to a new state, Buntin remained inspired to continue her long-distance academic journey, thanks to the encouragement she received from MC faculty members. In fact, she credits her involvement with Mississippi College for introducing her to her current vocational surroundings.

During a weekly class assignment for Norris, Buntin investigated Wake Forest and soon fell in love with the private research university. She had previously interviewed for another position at the institution founded by the Baptist State Convention of North Carolina and had kept in touch with a number of its employees.

When the opening in the School of Business became available, “the negotiation course I took at MC with Dr. (Merle) Ziegler helped me negotiate the job offer,” she said. “I’ve utilized the coursework at MC to further my career.”

While it may have taken Buntin a bit longer than she had planned to obtain her advanced degree – “It took me seven semesters instead of four to complete the program,” she said – she knew she could always look to MC faculty members for encouragement.

“The faculty were available for questions and Zoom meetings, which is very important in the online environment,” she said. “To know I had the support of the faculty to get through the program and succeed was very valuable.

“They persuaded me that it didn’t matter how long it took me to finish – what was important was that I kept progressing. It’s very empowering to know that I finished the degree program. All those challenges stacked up against me made it even more rewarding.”

She also got plenty of support at home. A tradition at the Buntin dinner table is for family members to mention the high and low points of their day. Often, her children would correctly predict what her answer would be.

“They’d say, ‘The high is you did some schoolwork, but the low is you have a lot of schoolwork to go,” she said. “That was sweet, knowing they supported me. Sometimes, they would stay up late with me, doing homework, which was encouraging – especially on nights when I’d rather get some sleep.”

“The online format for this program provides the flexibility for working adults who can’t physically come to Clinton to take courses,” she said. “While Ashlea was working toward her graduate degree, she got a new job and moved from Missouri to North Carolina. Fortunately, a move like that doesn’t hinder someone from participating in an online program.”

Buntin isn’t sure if she will pursue a terminal degree, continue her career in financial aid or leverage her new MC degree to begin a career in higher education administration.

“I’m still figuring that out,” she said. “Working with students is what I feel called to do. Having children has supported that calling. I’ve always enjoyed serving others – I’ve worked at church camps and on mission trips throughout high school and college, and I’ve always enjoyed helping others find their potential.”

The day after their trip, the Buntin children saw their mother realize her potential. As graduate school dean, Norris was honored to hand the diploma to Buntin on stage.

“It’s important for my kids to see that if Mom can do it, they can do it,” she said. “They saw their Mom staying up late and doing her homework when they were doing theirs. Being able to see the graduation ceremony as the culmination of all the work that went into the degree was important.

“I could receive the diploma in the mail, but going through the ceremony has a different feel. It’s like putting a bow on top of a present, and the kids got to see that Mom did something cool – she graduated with her masters.”

It was an experience that was well worth the trip.