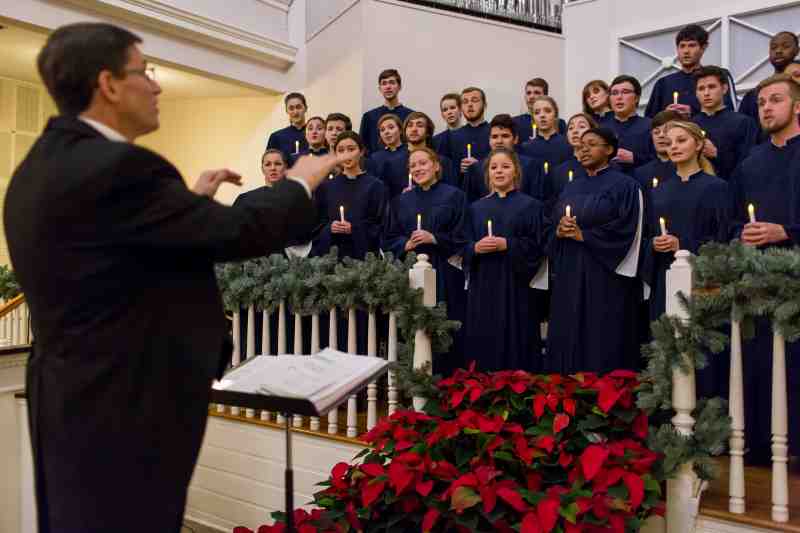 A scene from Festival of Lights 2018

Each year, MC’s Festival of Lights presents the songs, and readings of the scriptures telling the story of the birth of Jesus Christ. Choral director and music professor Mark Nabholz serves as the conductor of the award-winning 42-member MC Singers.

The MPB broadcasts reach thousands of TV viewers statewide on eight different stations in cities such as Jackson, Meridian, Greenwood, Oxford, and Booneville. Stations in Biloxi, at Mississippi State University in Starkville and in the Franklin County town of Bude will air the Festival of Lights broadcast.

MPB is partnering with Mississippi College for the fourth consecutive year to air the Festival of Lights.

It is a wonderful partnership that grows stronger from one year to the next. “The collaboration of the MC Music Department and MPB was a joy in every way,” said professor Angela Willoughby, who chairs the department.

This year’s holiday season concerts will feature cellist Jesse Christeson. A Boston-based cellist with the dynamic ensembles Hub New Music and Phoenix: The Orchestra Reborn, Jesse is well-known to Mississippi audiences. The former principal cellist with the Mississippi Symphony Orchestra is a versatile performer in the American contemporary music scene.

The Festival of Lights performances in December will feature the music of retired professor James Sclater, a nationally prominent composer from Clinton, Herbert Howells, Morten Lauridsen and F. Melius Christiansen.

Tickets to the Festival of Lights on the Clinton campus are now on sale. The productions at MC’s historic chapel are open to the public December 5, 6 and 7. The MC Singers’ performances each evening begin at 7:30 p.m.

Tickets are on sale at mc.edu/marketplace at a cost of $15 for adults, and $10 for MC employees and senior citizens (65 years old and higher). Students and children from any school pay $5. Provine Chapel is often packed for Festival of Lights performances. It is best for audience members to arrive early.

For additional details, contact Dottie Serio of the MC Music Department at 601-925-3440 or at serio@mc.edu