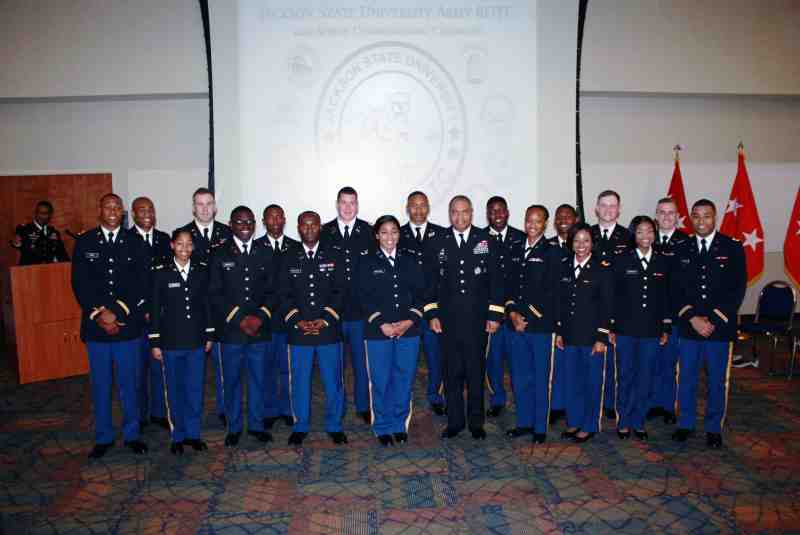 17 Cadets at Mississippi College, Jackson State University and Millsaps College were commissioned into U.S. Army leadership ranks on May 2 in a ceremony at JSU.

The MC men are among 17 cadets from metro Jackson schools commissioned to the rank of second lieutenants in the U.S. Army. Lt. Col. Dexter M. Brookins, Military Science Department chair at Jackson State University, offered his congratulations during a May 2 ceremony on the JSU campus.

All four men are all on track to be awarded diplomas at Mississippi College’s Spring 2019 commencement May 10-11.

Cadet John B. Endris will receive his MC bachelor’s degree in nursing on the Clinton campus. The Madison native will commission into the Army National Guard as a Second Lieutenant. He will join the Medical Service Corps.

The first stop for Endris will be to attend the U.S. Army Medical Department’s basic officer leadership course in Fort Sam Houston, Texas.

Set to receive his bachelor’s degree in kinesiology, John P. Burke commissioned into the Army National Guard as a Second Lieutenant in the field artillery unit. He’s bound for Fort Sill, Oklahoma to attend the field artillery basic officer leadership course. The former MC Choctaws football player was homeschooled in New Orleans before enrolling on the Clinton campus.

Cadet Levi S. Camden will receive a bachelor’s degree in history. A native of Perth, in Western Australia, Levi finished high school there in 2015. He served as team captain of the Swan Hills Swimming Club in Australia.

The son of Leith and Amy Camden, Levi is on track to attend the aviation basic officer leadership course at Fort Rucker, Alabama. He will commission into the Army National Guard as a Second Lieutenant in Army Aviation.

The fourth man stepping up his leadership skills is Cadet Chukwuma A. Onujiogu. The graduate student will receive his MC master’s degree in biology. He will commission into the Active Army as a Second Lieutenant in the Chemical Corps. He’s going to attend the chemical corps basic officer leadership course at Fort Leonard Wood, Missouri.

The cadet is the son of Joseph and Jecinta Onujiogu. Chukwuma and his wife, Chinelo Ilechie are the parents of two daughters, Kanyima and Chloe.

Undergraduates in MC’s Army ROTC program take classes their first two years on the Clinton campus and final two years at Jackson State. One of the current Mississippi College students enrolled in the leadership-building program is Samantha Hernandez of Louisiana. A political science major, Samantha seeks to fulfill her Army commitments and attend law school. She gives high marks to her Army instructors and fellow cadets at Mississippi College.