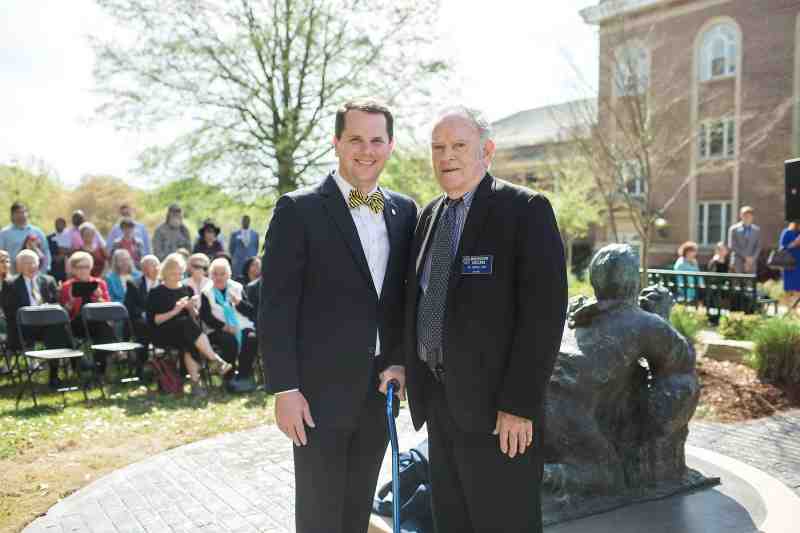 Dr. Blake Thompson and Dr. Sam Gore at the recent dedication of "Christ at Gethsemane" in the Rhoda Royce Prayer Garden on the campus of Mississippi College.

Samuel Marshall Gore left a lasting legacy as a gifted Christian artist, mentor to many in the arts world and as a wonderful family man.

At First Baptist Church Clinton, hundreds of admirers were drawn to the sanctuary for his funeral Monday. Speakers praised the humble Mississippian who touched their lives with kind words, encouragement and his amazing talents as an art professor.

In some cases, his impact will stretch for generations with his unique sculptures on the Mississippi College campus and other locations. It was his way of spreading the Good News about Jesus Christ.

At age 91, Gore died of cardiac arrest at a Jackson hospital on April 24. Until recently, Dr. Gore used his hands to craft three disciples to go with his “Christ in Gethsemane” sculpture unveiled in the Rhoda Royce Prayer Garden on March 29. Two disciples were finished and the third was half-way complete.

“Sam Gore was called to a certain destiny and fulfilled it,” retired First Baptist Church Clinton pastor Bill Baker told the audience seated in church pews. “He was gifted by an Almighty God for great works.”

Dr. Baker recalled the letter that Sam Gore and his wife, Margie, wrote to welcome him when he first became pastor of the church in 1973. He led the Clinton church for 23 years. “You will indeed be a blessing to us,” was the message on the letter from the Gores.

But in many ways, the letter spoke to how the Gores blessed so many others at his alma mater, Mississippi College, and across the arts universe.

Narrated by Dr. Gore, a video on large screens at the funeral service spoke of how the son of a Baptist preacher impacted his art students.

Shaping clay in his hands to rapidly craft nearly 500 busts of Jesus, first on the Clinton campus, Dr. Gore cherished his students. The beloved Clintonian taught them in a variety of mediums, whether it is watercolor paintings or bronze sculptures.

“I’ve tried to work with versatility so I would have more to share with students,” Gore, the MC Art Department Founding Father in the 1950s, said on the video.

Randy Miley, chair of the MC Art Department, spoke of first meeting Dr. Gore when the Mississippi artist visited his classroom when he was a 13-year-old. Upon future meetings, he encouraged the student to pursue his art studies at the Baptist-affiliated university.  “Randy, you belong at MC,” is what Dr. Gore advised him.

Finally, Miley enrolled as a Mississippi College student to study art in 1977. He fondly recalled Gore’s painting classes outdoors on the Clinton campus. Fast-forward to 1999 when Randy Miley joined the MC Art Department as a professor. Dr. Gore never stopped encouraging him to succeed, and he moved up the ranks in the department.

At the funeral service, Miley said he was amazed by the gifts of an incredible Christian artist whose “fingers became his brushes,” as he shaped clay later cast in bronze. His sculpture of Jesus washing the feet of his disciples at a spot near Provine Chapel and the “Jesus and the Children” artwork outside the School of Education remain destination points for Mississippi College visitors.

If Dr. Gore was addressing a First Baptist Church Clinton audience today, he would challenge students to take up the mantle of the good words of Jesus Christ with their art pieces, Miley said.

The professor thanked Samuel Marshall Gore for creating and growing the MC Art Department. “We will always remember you for that.”

After sacred music on the piano was mixed with church hymns including “How Great Thou Art,” Mississippi College provost and vice president Ron Howard delivered the closing prayer.

He spoke of how Dr. Gore took him under his wing when he was a young Mississippi College history professor 42 years ago. Their friendship blossomed for decades to come. Dr. Gore spread his kindness to everyone he met.

“We thank you Lord for gifting us Dr. Sam Gore,” Howard said. “He’s a dear friend and our very own national treasure.”

On display for funeral visitors in the church lobby were “Clarion-Ledger” newspaper stories about his “Fallen Comrade” sculpture presented at the Clinton Visitor Center in 2012 and his bronze of the late Lt. Gov. Evelyn Gandy unveiled at the Mississippi Capitol in 2010. Also displayed were three harmonicas he played, a violin he enjoyed and photographer Barbara Gauntt’s book “Samuel M. Gore: Blessed with Tired Hands.”

Showcased, too, was an old shoe containing pieces of raw clay. Sam’s shoe soles often got dirty and dusty working on one of his magnificent projects.

His huge bronze sculptures “Moses, Deliverer of the Law” in 2007, and “Christ, Fulfillment of the Law” two years later at the MC School of Law in Jackson continue to impress visitors from around the world.

As he exited the funeral service, graphic design major Matthew Bell, 21, of New Albany spoke of Dr. Gore’s vast influence in the arts community. “The people he taught, taught me.”