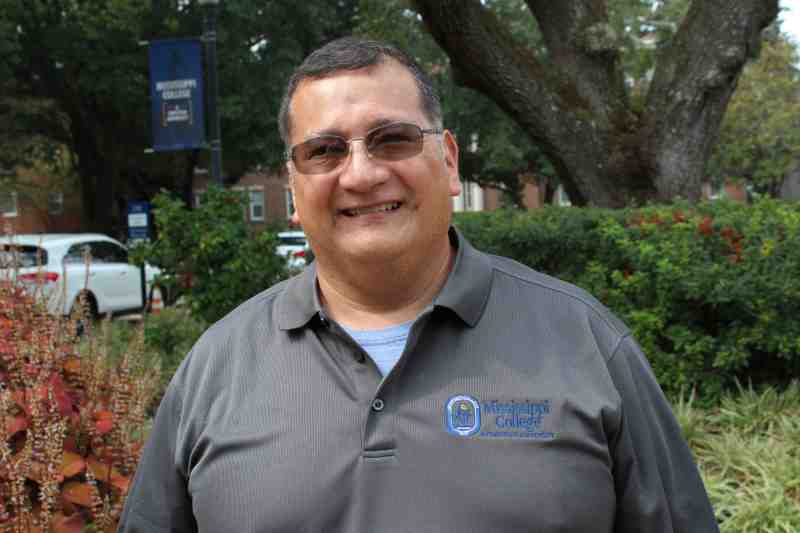 Louis Gonzalez seeks to improve the lives of America’s military veterans once he completes his social work degree at Mississippi College.

Part of a growing trend of non-traditional students on the nation’s college campuses, Gonzalez retired from the Oklahoma Army National Guard in 2013. At age 55, he selected Mississippi College as the place to pursue his dreams. He’s been blessed by his choice ever since.

“I chose MC because it was a Christian college and has a great social work program,” the Mississippi grandfather says. “It feels good to be going back to school to get my degree.”

Gonzalez moved to the Magnolia State to be closer to his daughter. Jaime L. Grammer serves as a full-time employee with the Mississippi Army National Guard’s battalion headquarters in Philadelphia. The move puts the Canton resident near his young grandkids, too.

Between family time, Gonzalez works hard to keep up his classmates on the Clinton campus. “The staff, professors, and students are wonderful to be around. My first struggles were going back to the basics of math, English and writing.”

“Louis is a breath of fresh air in the classroom,” Lawson says. “He brings different perspectives – as a male, veteran, non-traditional student and a minority. He is well-prepared, and contributes in class.”

Across the USA, social workers are in big demand. Helping people solve and cope with problems, social workers will experience an 11 percent job growth rate through 2028, says the Bureau of Labor Statistics. Jobs for healthcare, family and mental health social workers, among others, look strong through the next decade.

Gonzalez stays focused on his future career plans as he takes classes at the Baptist-affiliated university. “Being a retired veteran, I would like to help other veterans with any struggles they may have. I myself have been and go to the VA and use their healthcare.”

Today, the Department of Veterans Affairs operates one of the nation’s largest healthcare delivery systems. That includes 172 medical centers and over 1,000 outpatient facilities. There are more than nine millions veterans enrolled as America tries to meet the needs of an aging veteran population.

A former Holmes Community College student, Gonzalez is committed to helping people, whether they are veterans or not. Louis recently signed up with the Contact the Crisis Line, a Jackson-based organization. For more than ten years, its volunteers and employees offer crisis intervention services to callers.

Building his career skills as a social work major at Mississippi College, Louis is on his way to fulfilling a lifetime dream. “I married young and never went to get a college degree like I always wanted. It was a goal growing up.’’

He will become the first of six children from his parents, Alex and Seferina Gonzalez, both deceased, to earn a college degree. His dad retired from the Army and later worked ten years at Saginaw Steering Gear, a General Motors plant in Michigan. His mother primarily worked at home to raise six children. An “Army brat,’’ Louis was born at Fort Sill, Oklahoma, but spend much of his growing up years in Michigan.

Today, Louis Gonzalez, who is a divorced father, has three adult children and seven grandkids.

Reflecting back at his military career that began when he joined the Army Reserves in Michigan in June 1981, Louis sees new opportunities ahead. It’s never too late to pursue an education, the Mississippian believes. His advice to college students, no matter what their age, is pretty simple. “Don’t procrastinate.’’

An MC junior, Louis is on track to graduate in May 2021. Like many classmates, he’s found a home and his calling at Mississippi College.