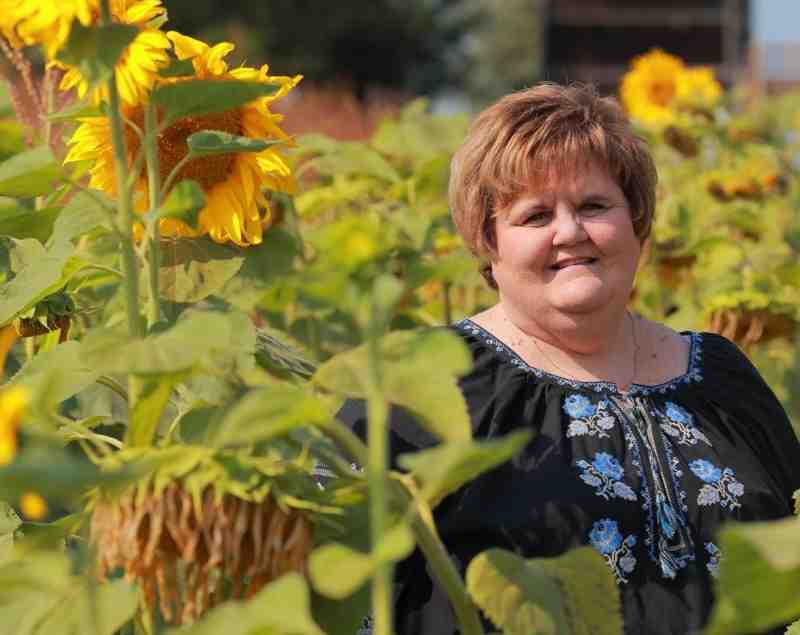 Becky DeWett, who has spent the last 28 years in Ukraine as a missionary and educator, will be the featured speaker during Mississippi College's Central Commencement.

Sobering accounts from a conflict half a world away have remained a daily part of Mississippi College students’ lives since Russian forces entered Ukraine on Feb. 24.

Despite the distressing reports, God is sovereign, He remains in control of human affairs on Earth, and He is faithful to His people, even in the midst of war.

That’s the message Becky DeWett hopes to instill in MC’s Class of 2022 when she delivers the keynote address during Mississippi College’s Central Commencement.

“God’s faithfulness to us is not based on our faithfulness – it’s based on His love for us,” said DeWett, who has spent the last 28 years in Ukraine as a missionary and educator. “As a spokesperson for what is going on in the war, that’s the message I want to repeat over and over.”

Few are more qualified to deliver that message to the more than 400 newly minted MC graduates than DeWett, who has encountered the uncertainties of the conflict firsthand. A Clinton native and 1984 graduate of MC, DeWett serves as principal of the Elementary Department at Kyiv Christian Academy, an educational institution she helped establish in Ukraine’s capital.

DeWett initially went to Ukraine in 1994 to serve a two-year stint as an International Service Corps homeschool teacher for a Southern Baptist Convention-affiliated missionary family. The country had gained its independence just three years earlier, and she was among a large wave of missionaries who were being welcomed into the newly formed republic.

When her term expired, she joined the Campus Crusade for Christ, building student leaders and spreading the Gospel to students and their families throughout the country.

“I absolutely loved the people I met in Ukraine,” she said. “They are the major reason I stayed. They were open and ready to learn about Christian education, and I was excited to be a part of that.”

After 10 years with Cru, she helped establish Kyiv Christian Academy while also working for the Association of Christian Schools, traveling throughout the former Soviet Union to train administrators, teachers, and parents in Christian education. She has served as an independent missionary in Kyiv for the last 16 years.

The story of how she, her Ukrainian roommate, Nadia Povalinska, and their dog left Ukraine in the early days of the deadly military exchange may be typical of the hundreds of thousands who have fled the conflict, but it is no less amazing.

“Never in my wildest dreams did I imagine in the year 2022 that insanity like this would cause us to have to run for our lives and watch our adopted country be decimated,” she said.

DeWett had been aware of the potential for conflict, but when Russian troops began gathering at the Ukrainian border last December, representatives from the U.S. Department of State urged her to evacuate the capital city. By early February, Kyiv Christian Academy had gone fully online. Finally, on Feb. 18, she and a small group set out for the Carpathian Mountains in the western part of the country for what DeWett thought would be a short duration.

“I would not leave the school until all our teachers were gone,” she said. “Once we got to the Carpathians, we thought we’d only have to remain there for two or three days, but that spread into a week.”

On the evening of Feb. 24, Kyiv and several other Ukrainian cities came under attack, and it became apparent that Ukraine was no longer safe. Two mornings later, DeWett’s group set out for the Romanian border in two cars – DeWett’s friend, her husband, and their two children in one, and DeWett, her roommate, and their dog in another.

What they encountered was not to be believed – especially in the 21st Century.

“There were millions of people trying to leave Ukraine at the same time,” DeWett said. “As we sat in the car, we saw hundreds of thousands of people on foot trying to get to the border. There was such a huge mass of people.

“It took 64 hours just to cover the last six miles to the border.”

The anxiety-laden journey was made even more uneasy with the potential of explosions ringing out across the night sky.

“The last night before we were able to cross, officials asked everyone in cars to turn their headlights off so they wouldn’t attract attention from the air,” she said.

Once they had finally crossed into Romania, DeWett and her friends didn’t have much time to rest.

“We were relieved we had gotten across the border and had made it out of Ukraine, but we were tired, we were dirty, and I hadn’t slept in three days, inching along in the car,” she said. “Everything had been so slow for three days, then suddenly, everything shifted to fast forward.”

After a brief overnight respite, DeWett and her roommate drove through the Romanian mountainside, navigating its dangerous, steep curves and hairpin turns in icy conditions. They eventually entered the municipality of Gheorgenia, where a local family hosted them for five days.

“At that point, we recognized that things in Ukraine were not going to get any better,” DeWett said. “So, we took an eight-hour trip to Bucharest and flew from there directly into Atlanta.”

DeWett saw evidence of God’s righteousness throughout the ordeal, even while chaos was erupting around her.

“When the government could no longer take care of the community’s needs because of the conflict, things fell apart: there’s no water, there’s no food,” she said. “But people pulled together, not just in Ukraine, but in Romania, Poland, Czech, and Slovakia, and all the surrounding countries, to be a safety net for the people who were trapped at the border.

“During the hours we were there, groups of students and older people who wanted to help constantly went up and down the road offering us drinks, sandwiches, hot food, and soup. People carried packages of diapers to provide to those who needed them. Nobody expected to be at the border for that long, but we saw an immediate uprising of generosity and care from people that was spontaneous, not organized by any government.

“In times of trouble, people either fall apart or pull together. We were inundated by people trying to help. There wasn’t a need we had from the time we were trying to cross the border to when we arrived back in Clinton that someone had not stepped up to fill. It brought out the good in people.”

Her experience proved that the reality she had believed in all her life, the very message she had shared from God’s word with others, was indeed the truth.

“My word for the last year was ‘sovereign,’ and every time a problem would come up, I’d say, ‘God is sovereign,’” DeWett said. “Now, I felt like God was saying to me, ‘You’ve used this word. Now I’m asking you, ‘Do you believe it?’”

“Whenever I’m feeling upset or discouraged or frustrated, I have to fall back on the fact that God is sovereign, He has a plan, and He’s going to be faithful to take care of me and see me through. To paraphrase Matthew 6:26, if He takes care of the birds in the air, will he not take even more care of you?”

Since returning stateside, DeWett said members of Morrison Heights Baptist Church in Clinton have helped provide her with lodging and supplies, for which she is deeply grateful. Remarkably, she and many of the Kyiv Christian Academy teachers who have been scattered throughout the globe are still conducting classes online for students who are able to attend via Zoom.

“It’s been great for the students because it’s given them a sense of normalcy,” she said. “It’s been difficult – our time zones go from Colorado to Korea, so many of the teachers have to record their lessons. But it’s something for the children to hold on to, and the parents have expressed their thankfulness for it.

“Ironically, the COVID-19 pandemic prepared us for this situation. We immediately went into our COVID protocol. Who would have thought COVID-19 would turn out to be a good thing?”

DeWett said she plans to return to Kyiv once the conflict has ended, although she may not be fully prepared for what she may find.

"My heart is still definitely there,” she said. “My friends who have stayed in Kyiv will have been changed. They will have gone through something I can’t imagine. Society will be different.

“But God is faithful. If He allows me to return, He will prepare me for it. That may be why I’m here now. I don’t know what God has planned for me while I’m here, but my goal is to remain willing to do whatever He calls me to do.”

One thing she never dreamt she would be called to do is to serve as keynote speaker at her alma mater’s commencement. She said she hopes her address will bring glory to God and point to His sovereign hand in the students’ lives.

“To paraphrase Henry Blackaby in ‘Experiencing God,’ students shouldn’t be so quick to go out and find their mission in life. Sit back, see where God is at work, and join Him in His mission. Don’t just take the first opportunity – be in constant communication with our Father. He uses all of us in every area. It doesn’t matter what field we are in; He can use us. We can be His hands and feet.

“It’s not about me, it’s not about Ukraine – it’s about God and bringing glory to Him and for Him to be magnified by all we do.”

Mississippi College's Central Commencement is scheduled for 5:30 p.m. on Thursday, May 5, on the Quad. The ceremony will include live music, special awards, and the Alumni Charge. In the event of inclement weather, Central Commencement will take place in the A.E. Wood Coliseum.

Degrees will be conferred to MC students during their respective schools’ graduation ceremonies on Friday, May 6: the Schools of Business, Christian Studies and the Arts, and Humanities and Social Sciences at 10 a.m.; the Schools of Nursing, Sciences and Mathematics, and Interdisciplinary Studies at 1 p.m.; and the School of Education at 4 p.m.