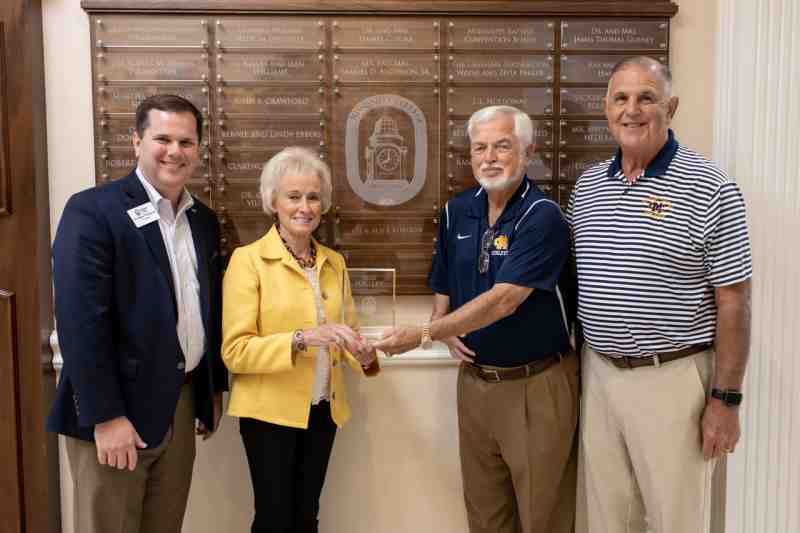 One of the most recent inductees into the 1826 Society – Mississippi College’s most prestigious philanthropic organization – almost didn’t get to graduate from the Christian University.

The way Joe D. Robison Jr. tells it, only divine intervention – by way of the firm hand of Dr. Howard E. Spell, then-academic dean of MC – kept him from being banished from the institution he and his wife, Alice, have dedicated so much of their lives to support.

As a student, Joe Robison admitted, he didn’t pay much attention to going to chapel or attending class. A voice major, he became heavily involved in singing folk and gospel music as part of a quartet representing MC throughout the Southeast.

Then one day, Spell invited him into his office to inform the young tenor he had earned a “vacation.”

By not showing up for at least 75 percent of his classes, despite making his grades, Robison had put his academic standing in jeopardy. Spell was offering him an opportunity to remain in school.

But first he had to go home.

After taking a semester off, Robison returned to MC and earned his degree in 1966.

“I came back determined to succeed,” he said. “What Dr. Spell did was the right thing to do. It got my attitude right.”

MC has been a major beneficiary of that attitude adjustment. After graduation, the Robisons both taught in Louisville, Mississippi, for more than three years before Joe joined his father’s tire business in Laurel. Forty years later, he retired as CEO and president of Robison Tire Company.

Throughout all those years, the Robisons – who have celebrated their 55th wedding anniversary - have supported Mississippi College. They even helped start MC’s first athletics banquet, which took place in the A. E. Wood Coliseum.

“D. D. Lewis, a linebacker who played at Mississippi State and later for the Dallas Cowboys, was the first speaker,” Joe Robison remembered.

The couple supported MC with a yearly $5,000 donation, then increased the annual amount to $10,000 and, eventually, became the school’s first $25,000-per-year contributors. Their support of the Choctaws athletic program was so significant that the men’s locker room in the coliseum was renamed for them.

But their legacy to MC doesn’t reside solely in gifts to the athletic program. MC School of Business students have also prospered, thanks to the Robison Family scholarships the couple established.

“We made sure that athletics and academics both benefited,” Joe Robison said. “We had the firm belief we need Christian people in business, because to me, there seems to be so much lack of integrity in business, particularly when they get bigger.

“It wasn’t until I was in my late 40s before I fully realized as much as I have been blessed, I needed to share those blessings with others. It’s something I needed to be a part of my life.”

To honor their joining the 1826 Society, Dr. Blake Thompson, MC president, hosted the Robisons on a campus visit, along with Coach Mike Jones, their longtime friend and Mississippi College legend.

“You should know how thankful we are for the both of you,” Thompson told the couple, “and for the work we can do because you support us.”

A member of the Mississippi College Foundation Board since 2005, Joe Robison played an instrumental role on the leadership team for the Growing the Vision Campaign that raised $87.4 million for MC in 2010. During MC’s 2016 Homecoming, he was named a co-recipient of the Order of the Golden Arrow Award, which recognizes a deep commitment to serve the University and benefit others.

Now, the Robisons’ philanthropic efforts have raised them to an even loftier position at the Christian University: the 1826 Society recognizes lifetime contributions of $1 million or more to Mississippi College.

“Mississippi College is one of the few places where Christian faith is at the top of the list,” Joe Robison said. “Not just education, but living a proper life and influencing others.”

As he and Alice looked at the 1826 Society donor wall outside the president’s office in Nelson Hall, they paused to reflect on the other names that appeared alongside their own.

“The people on that list are some of the most outstanding people I’ve known in my life,” Joe Robison said. “What it represents to them, their names being up there, is sincere. There’s nothing phony about it.

“They did it for the love of the Lord.”