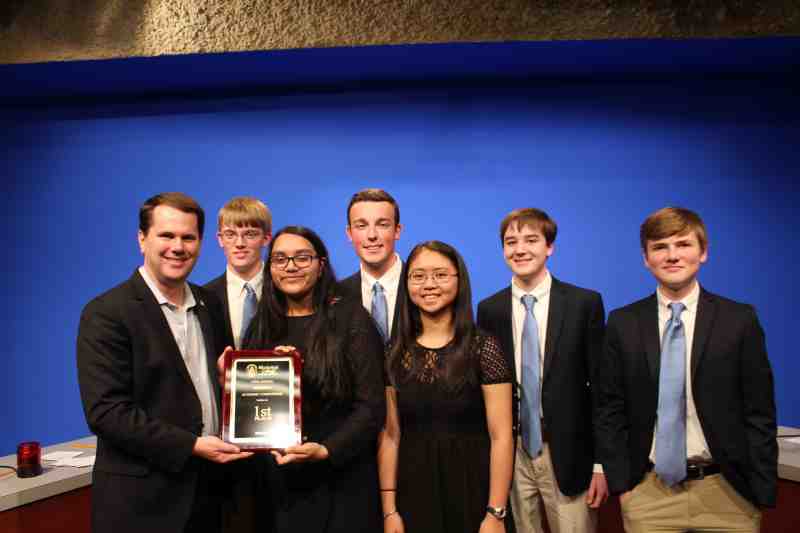 When contest officials finished tallying the results, the score was 470 for Madison Central to 335 for Jackson Prep. The Jaguars team of four students was elated to return to their Highland Colony Parkway campus in Madison No. 1.

It didn’t happen by accident as the Jags fielded a barrage of questions while MC television cameras kept rolling in the studio on December 5.

Madison Central students and the squad from Jackson Prep in Flowood thrived on the added pressure of responding quickly before live TV cameras.

Madison Central’s Crunk, Cameron Fowler, Will Kalahar and Drew Dunn were impressive, but so were Jackson Prep students. Moderator Tommy Leavelle tossed questions at both squads at the Leland Speed Library. Leavelle is an MC mathematics professor.

Students say the event was fun, and they learned things at the same time.

The Mississippi College Office of Continuing Education sponsors the annual event at the library’s learning resource center. President Blake Thompson stopped by to thank students from both Mississippi high schools.

Questions covered American geography, pop culture, politics and much more. One question asked was what year Superman appeared in DC Comics. The answer? The year was 1938.

Parklane Academy of McComb and Jackson Academy were the two other Mississippi teams making the Final 4 on the Clinton campus in early December.

It was educational, but also required lots of work for the students to prepare. Said Madison Central captain Sreya Maddali: “We put our heart and soul into it.”

There was no competition held last year at Mississippi College due to scheduling conflicts. Jackson Prep won the event in 2016. Madison Central High finished on top in 2015. Kristy Ainsworth, a physics and chemistry teacher, served as the sponsor of the Madison Central squad.

Overseeing MC TV productions, Ryan Capell serves as the university’s media technology coordinator. A taped broadcast, he said, should be available for viewing starting next week.