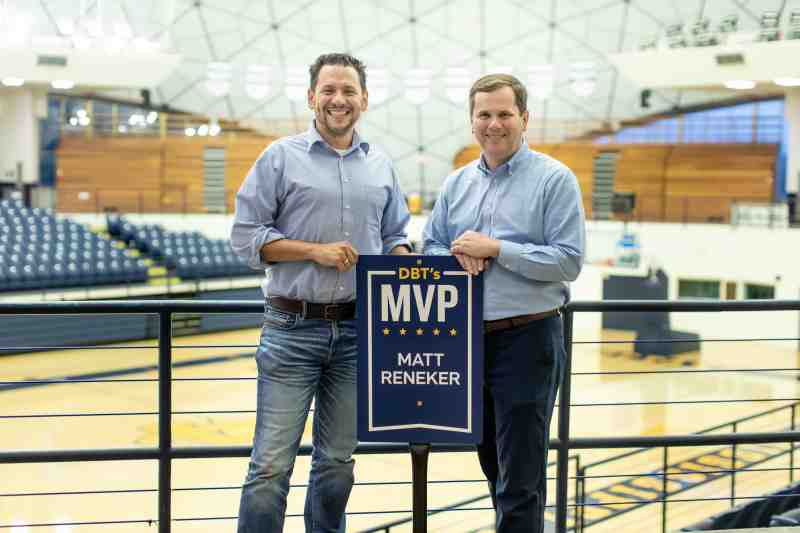 Mississippi College head cross country and track and field coach Matthew Reneker spends a lot of time on the sidelines cheering on his student-athletes, but he recently garnered an accolade of his own: President Blake Thompson’s monthly MVP award.

Michael Wright says that the recognition is well-deserved, as Reneker has attracted 66 athletes to make their mark along Choctaw Trails.

“He’s building two powerhouse programs with track and field and cross-country, and I’m sure national championships are right around the corner,” Wright predicted. “One thing he’s already succeeded at is getting incredible, mission-fit students to say ‘yes’ to MC, and MC is better for it.”

Hand-picking “mission-fit” students is a calling for Reneker, who spent 10 years coaching at the high school level and working in church ministry before feeling called to coach at a Christian university.

Mississippi College’s search for a track coach coincided with this calling, and Reneker says that the choice to move from Ohio to Mississippi was an easy one.

“When I came for my interview in December of 2015, I knew that this was the place for my wife and me,” the Walsh University graduate recalled.

Now entering his sixth season with Choctaw athletics, Reneker acknowledges that a “day in the life” as a collegiate coach is long but rewarding.

“I arrive at MC for long-distance practice at 5:00 a.m., do compliance paperwork, go home to let my dogs out, and conclude with sprinters’ practice at 5 p.m.”

He sees each early-morning and late-afternoon practice as an opportunity to develop his student-athletes into better players and people.

“I believe that, as a coach, I have the honor of overseeing another human being during an influential time in their life,” Reneker states. “I am a mentor of movement, an advocate of advancement, and a catalyst of change.”

The advancement that Reneker seeks was evident in the Choctaws’ strong showing at the Gulf-South Conference Championships. Reneker helped lead the Choctaws to the GSC Indoor Championship in his first season at the helm of the program. MC had six event championships, 22 All-GSC honors, and set two meet records, including three GSC Championship award honorees. His athletes have 19 top-five regionally ranked marks. Reneker was named the USTFCCCA South Regional Men’s Coach of the Year.

For Reneker, such success is all part of a day’s work—and part of his ultimate plan to create a flourishing team.

“I’m responsible for engineering the vision of a successful future,” he concludes. “The mission for NCAA Division II is ‘life in balance,’ and I truly believe that MC is a place that students can be afforded the resources to grow academically, spiritually, and athletically. I cannot think of a better place to spend my life’s work than MC.”