MC Alert: MC operations on the Clinton campus and at MC Law in Jackson will close at 3:30 p.m. on Tuesday, Nov. 29, in anticipation of severe weather. All classes at both the main campus and the law school beginning after 3:30 p.m. are canceled. Please monitor local conditions and stay weather aware.
Posted Tuesday, November 30, 2021 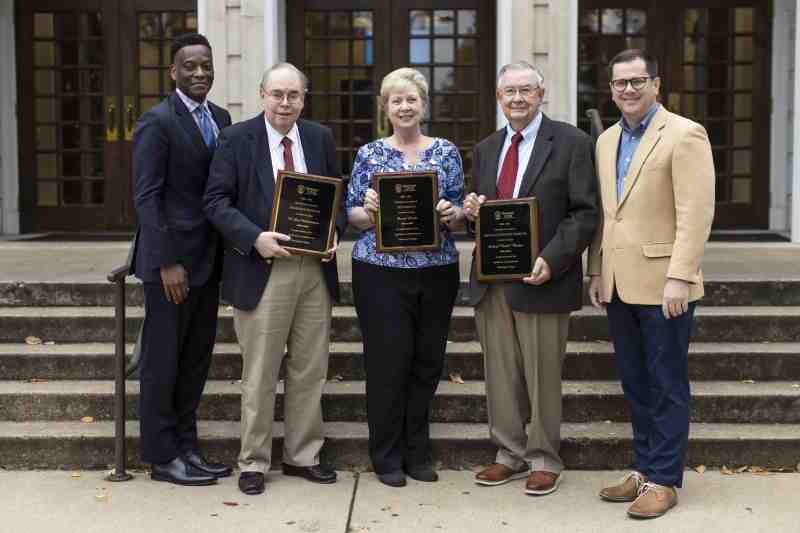 When it came to rubbing elbows with the rich and famous, few could top H. Lee Hetherington, an MC Law professor for more than four decades.

After finishing law school in the early 1970s, Hetherington went to work in New York’s hyper-charged music industry, serving as assistant to the chief executive officer and house legal counsel for Peermusic at a time when Hall of Fame performers like Lou Reed, the Stooges, Patti Smith, the Ramones, and Blondie were just beginning to ascend the heights of their celebrity.

Shortly after Mississippi College acquired the former Jackson School of Law in 1975, he abandoned life in the fast lane to join MC Law, but in 1984, he found the siren call of the entertainment industry simply too irresistible. He took a leave of absence, moved to California, and became vice president of administration for Columbia Pictures Television Group in Burbank.

He represented numerous well-known clients, including the Robert Johnson Estate and the family of Sonny Boy Williamson, and his first published work involved an in-depth interview with legendary country music artist Merle Haggard. Yet his heart remained at the private Christian University in Clinton, Mississippi.

“The money was good, and it was interesting, and I met a lot of celebrities,” Hetherington said of his time working on both coasts. “But I realized this was the best job in the world. So, I came back, and I’ve been here ever since.”

A five-time selection as one of MC Law’s outstanding professors, Hetherington officially retired from Mississippi College in 2017, although he taught as an adjunct professor from 2019-20. He came back to campus Nov. 18 to receive the ultimate coda to a long and distinguished career: emeritus status at the Christian University.

Hetherington joined three other renowned members of the MC faculty and staff selected for the honor this year, including Leland “Butch” Benton, assistant professor of chemistry; Agnes Man-Bourdon, instructor of modern languages; and Donna Lewis, chief financial officer. All retired in 2020, although Man-Bourdon and Lewis are still connected to the University – Man-Bourdon as an adjunct professor of modern languages and Lewis as an assistant to the CFO.

In all, the four newly named emeritus faculty and staff have a combined 89 years of service to the University.

Emeritus status is bestowed upon retired Mississippi College faculty or staff members who have made significant contributions to the Christian University. It is given to showcase a long and distinguished record of scholarship, teaching, research, and service.

Dr. Blake Thompson, who was on hand to present plaques to the emeritus recipients able to attend the ceremony, said all were exceptional choices for the honor.

“Each of these individuals has made important contributions to Mississippi College,” Thompson said. “They have dedicated their life’s work to enriching others, and the University has benefitted from their investment in many ways.

“By conferring emeritus status, we express our sincerest gratitude for their decision to lend their immense talents to this institution.”

When asked what made his tenure at MC Law so special, Hetherington responded simply, “The students. The faculty. It’s like a family.

“You see people you’ve taught go on to be judges and successful lawyers, and you feel like you had a hand in it. It’s the best job in the world.

“I’m very lucky to have all that.”

Benton echoed the sentiment. After his third retirement – Benton served as an officer in the Mississippi Army National Guard for 20 years and a Florence High School teacher for 25 – he regards the two decades he spent on the MC faculty as the most memorable by far.

“It’s a very important part of my life,” Benton said.

His devotion to Mississippi College was extended to his son, Christian, who graduated from MC with a degree in chemistry. The younger Benton is now a pharmacist in Jamaica.

While Benton said he was confident he had left MC’s Department of Chemistry and Biochemistry in good hands, he did have one word of advice for students entering the University’s rigorous program.

Man-Bourdon, who missed the presentation to be in France for the birth of her first grandchild, was described by Dr. Amy Williamson, associate professor and chair of modern languages, as a truly gifted teacher and mentor for students in the French program.

“We were so proud that she received her emeritus status,” Williamson said. “It is an honor that she truly deserved.”

“She was an energetic teacher who expected the best of her students, and challenged all of us to think about the impact we have in the world. As a colleague, she was supportive, innovative, and a leader. She brought her love for engaging conversations, literature, and language every time she entered a room.”

Throughout her 13 years on the MC faculty, Man-Bourdon held her students to high standards – and they achieved remarkable results, Williamson said.

“She was the primary teacher for our French majors and conscientiously guided them through their academic language learning experience on campus,” Williamson said. “She established, organized, and was the director for the French study abroad program in Tours.

“As a result of the relationship she built with the school and the type of students we sent, the program was eager to receive our students and worked with them to make the experience an exceptional one.”

Man-Bourdon also sponsored MC's chapter of the Alpha Mu Gamma national language honor society, supporting the students' plans to participate in the MC Homecoming parade, organizing activities to celebrate National Foreign Language Week to raise awareness of the benefits of learning languages, and develop ties between the AMG students and those in the International Students Association.

“Agnes’ contributions to her students’ lives will continue for years to come,” Williamson said. “She brought so much enthusiasm for learning, joy for international experiences, and encouragement to our students to try new opportunities.

“Her impact in her colleagues’ lives will continue for years as well.”

In a story as inspirational as it is remarkable, Lewis worked her way up from a part-time payroll accounting position to budget analyst to an executive leader at Mississippi College.

Her ascension was far from easy: just three weeks after starting at MC, Lewis was diagnosed with breast cancer. However, she found a caring community of believers who were more than willing to help her throughout her healing process in her new colleagues.

“These people wrapped their arms around me that first year,” she said. “The people here, there’s nothing like them.

“I know God put me here. It’s an amazing place.”

Dr. Debbie Norris, dean of MC’s Graduate School and vice president for planning and assessment, said Lewis is an amazing person, having excelled in whatever role she has had.

“Donna Lewis was always a ‘big picture’ person,” Norris said. “I don’t know if I’ve ever known anyone as adept at breaking down a financial picture.

“Having worked with her hand-in-hand for many years, I can attest to her extreme competence and dedication to making MC better.”

Angie Hardin, director of admissions and enrollment operations for undergraduate admissions, said the former CFO had an instrumental role in navigating the University through some financial challenges.

“Her knowledge of the numerous intricacies of the higher education budget is incredible,” Hardin said. “Having done my practicum under Donna, I was able to learn more about the management of the University’s budget as a whole.”

Lewis, whose father was an MC graduate, said she had no real connection to Mississippi College until she started working here. Having achieved emeritus status, her connection to the University will be lasting.

“It’s a great place and I’ve made wonderful friendships here,” she said. “A lot of people (on MC’s emeritus list) have given a lot of their lives to Mississippi College.

“I feel very humbled to be on the same list with those people.”