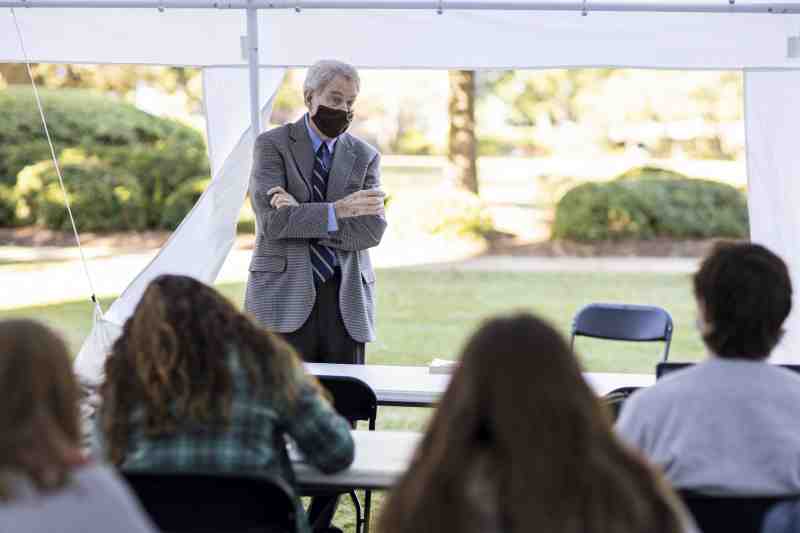 Dr. Dan Jones lecture on the relationship between science and faith.

Fifteen Honors College sophomores gathered under a large tent outside Provine Chapel to hear Dr. Dan Jones lecture on the relationship between science and faith. A native Mississippian and MC graduate, he addressed the topic with insights from his storied career as well as principles of his Christian faith.

Retiring in late June, Dr. Jones served the University of Mississippi in several leadership roles. The Ole Miss chancellor from 2009-2015, he previously served as vice chancellor for health affairs and dean of the School of Medicine in Jackson from 2003-2009. He brings life-changing experiences as a former medical missionary in South Korea. Dr. Jones served as the national president of the American Heart Association from 2007-2008.

With the world facing the COVID-19 pandemic, MC joins many universities offering classes outdoors as part of health protocols this fall.

Birds were chirping nearby on a cloudless Wednesday morning as Dr. Jones spoke on the Clinton campus and posed questions to students.

His career as a gifted physician, award-winning educator, and celebrated administrator did not happen by accident. "Everything I've done has been a calling,” he said.

Living in Hazlehurst with his wife, Lydia, Dr. Jones says everything he’s done during his career relates to serving God’s kingdom.

President Blake Thompson stopped by to visit with the distinguished lecturer and longtime advocate for the Christian university. He’s served on the institution’s board of trustees and done many things to improve the health of Mississippians.

Until recently, Dr. Jones served as the director of Clinical and Population Science in the Mississippi Center for Obesity Research at UMMC. He earned his MD in 1975 from the University of Mississippi School of Medicine after his graduation from Mississippi College.

Dr. Jones spoke of stories from the Bible, touched on ethical issues facing the medical world, and recalled his work as a missionary in South Korea.

“I love South Korea,” he said when a student asked about his time in the Asian nation several decades ago. “It was a great privilege in my life,” he said. “The church is so strong there.”

Dr. Jones spoke of how medical knowledge changed dramatically since he first learned about genetics as a Mississippi College undergraduate in 1967-68.

During his talk, the Copiah County resident read passages from a best-selling book by Francis Collins titled “The Language of God.” Published in 2006, it presents the scientist’s argument that science and faith are compatible. Collins is an American physician-geneticist noted for his discoveries of disease genes.

Struggling with doubt growing up, Collins was exposed to Gospel traditions and became a Christian.

Speaking to students while wearing a black mask, Dr. Jones sees science as a tool that is “part of my faith.”

His lecture was well-received by the Honors College students.

A nursing major, Elizabeth Speed, 19, of Jackson, said she learned a great deal about the relationship between science and faith. “It was awesome being outdoors.”