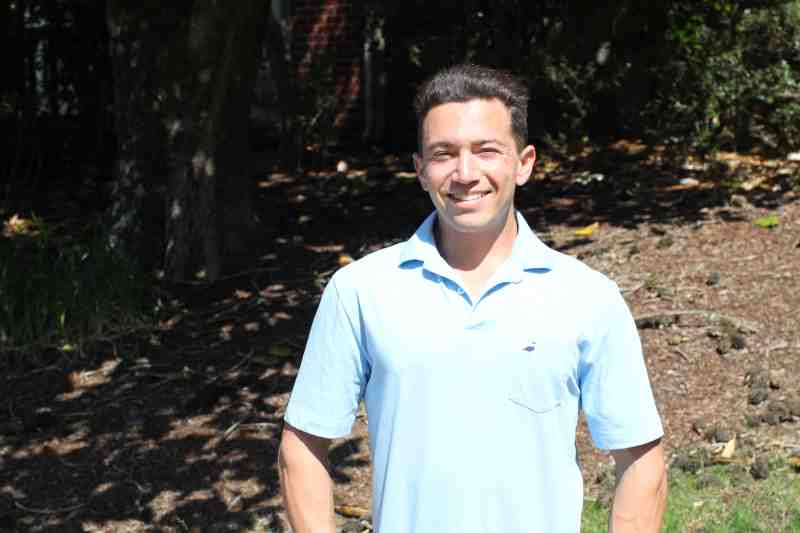 Cameron Smyly, a senior kinesiology major at MC, teaches others that movement should never be taken for granted.

Faculty in the Department of Kinesiology at Mississippi College describe Cameron Smyly, one of their top students, as a tireless worker who never gives less than his best effort, a rare individual with an infectious zest for life, the kind of person you would want your children to emulate.

“He’s absolutely one of the finest humans I think the Good Lord made,” said Dr. Scot E. Long, assistant professor of kinesiology. “The minute you meet him, he’s always smiling, always polite. It’s always ‘Yes, sir’ and ‘No, sir.’ He’s always in a good mood, is never going to gripe about anything, and has never said a bad word about another person.

“When you meet him, you realize quickly you’re dealing with a special person.”

His professors and his peers consider the physically fit Hollandale resident with a winning grin as nothing less than an inspiration.

And that’s before they learned about his remarkable story.

Smyly doesn’t remember much about the day that altered his life forever.

He was in the first grade and riding to school on a typical autumn morning in the Mississippi Delta, filled with anticipation for a school homecoming celebration, when a truck rammed into the family car his mother was driving.

“My mother would always lead us in a prayer on the way to school,” Smyly said. “That morning was the final day of Spirit Week. We were at an intersection with a two-way stop. Mom was saying a prayer, we had our heads bowed, and the person hit us on our blind side. We didn’t see him.

“That’s all I can remember. I woke up 30 or 40 minutes after, with a doctor standing over me. I blacked out again until I was actually in the ER.”

The truck’s impact had separated Smyly’s skull from his spinal column, an injury so severe that most of the 10 percent who survive it are rendered ventilator-dependent quadriplegics. Yet at Delta Regional Medical Center in Greenville, where he had been taken, Smyly was alive, breathing, and moving on his own.

He was airlifted to the University of Mississippi Medical Center, where he underwent surgery to remove a piece of glass that had lodged in the side of his neck. Then he faced a more daunting procedure: a spinal fusion.

Dr. Louis Harkey, professor and Robert R. Smith Chair of Neurosurgery at UMMC, had recently traveled overseas, where he and physicians from Sweden and the Oschner Clinic designed the hardware necessary to treat injuries like Smyly’s successfully.

“Dr. Harkey had just come back from Germany, where he had studied the exact injury I had,” Smyly said. “He had done the operation only once before.”

Smyly faced weeks of grueling rehabilitation following the successful fusion to reestablish how he moved and communicated.

“I went through multiple surgeries and had physical therapy and speech therapy,” he said. “I was in the hospital for about a month and a half. I loved the nurses and therapists. They were like my family.”

Within two months of his injury, Smyly was back home, and had even bagged his first deer with a crossbow. But he still had a long recovery road to travel.

“It took me a year-and-a-half to recover,” he said. “I finished the rest of that school year in the classroom, seeing a tutor outside of school and my teacher at her house in my free time to catch up. It took me that long to interact with other kids, to return to playing normally.”

Although the side-to-side movement of his head and neck would be somewhat restricted, he managed a complete recovery from his injuries.

Most who become familiar with Smyly’s story consider his survival from the accident a miracle. The man himself took it as a clear message from God.

“It was God’s way of telling me, ‘You’ve got to get back up and start moving,’” Smyly said.

And he did. Shortly after his recovery, leaders at the Blair E. Batson Hospital for Children at UMMC selected Smyly as the hospital’s Children’s Miracle Network “Champion.” For an entire year, he represented pediatric patients in the state, traveling across Mississippi to advocate for their charitable needs.

By the time he entered high school, Smyly had discovered the joys of physical fitness. Although his injury prevented him from playing contact sports, it couldn’t stop him from reaching peak physical condition.

“I would work out with the football team at the school weight room,” Smyly said. “Shortly after I started working out, my brother started working out consistently again. My dad has loved lifting ever since his high school years, and lucky for me, he had all the equipment needed at home. Having my dad and brother at home and my friends on the football team at school to work out with meant that I never had the ‘I don’t have anyone to work out with’ excuse.”

“Working out kept me happy, driven, and it gave me something to do.”

One of his high school teachers urged him to pursue science in college, and when it came time for him to choose a university to attend, his school counselor and his mother encouraged him to visit Mississippi College. He was quickly won over by the close relationships MC students enjoy with their professors.

“If it weren’t for the one-on-one interaction I had with my teachers way back in first grade, there’s no telling what my outcome would have been academically,” he said. “MC has a smaller, tight-knit community. Being able to come here and build relationships meant a lot to me.”

He considered majoring in biology, but after one semester at MC, he discovered the perfect intersection between his passion for exercise and his knack for science: kinesiology, or the study of human bodily movement. Considering his life experience and work ethic, it was an almost flawless major for Smyly.

“The human body is the most advanced machine to ever exist, and every aspect has been meticulously crafted by our Creator,” said Dr. Zackary Vosen, assistant professor of kinesiology at MC. “As a kinesiology student, Cameron is an especially interesting story. Each day, he learns about the musculoskeletal system, origin and insertion points of muscles, the inner workings of the nervous system, psychology, and the like.

“Cameron not only works his mind by adding to his base of scientific knowledge, but he is also working his body regularly. Fitness is a very important part of his life, and seldom will Cameron go a day without pumping iron, running, or playing a round on the links. As we read the words of Paul in Hebrews 12, Cameron literally ‘runs the race’ through living out his faith daily and taking care of business in the classroom and taking care of his body through exercise.”

That’s not to say that Smyly is completely without physical repercussions from his injury. He refers to his recovery as an “ongoing situation.”

“About every six years, if I start having neck pain, I have to go in for a check-up,” he said. “Other than that, I will be in the gym working out. As far as physical movement, there’s not a whole lot I can’t do.”

That “can do” attitude is part of what sets Smyly apart from other “gym rats,” Long said.

“To work out when you’re injured is always a challenge. You really have to love doing it,” he said. “Most people have excuses for why they can’t work out. Cameron is the opposite. He can be hurting, but he’s going to be working out. He’s going to find an excuse why he should be working out.

“That’s what we call ‘intrinsic motivation.’ A lot of that is God-given. It’s in his DNA. And a lot of that is due to his rehab. The values he gets from rehab have transferred over to his able life as he worked his way through his injury.”

Not all of his exercise comes from the gym or the track. On some weekends, Smyly can be found working on his family’s farm in the Delta. Despite his passion for staying active, he remains focused on his studies: Smyly is on track to graduate in May 2023 with a “near-perfect” GPA in kinesiology, according to Vosen.

“I believe that Cameron is a living testament to the purpose that the Lord gives each of us for our brief stay here on the Earth,” Vosen said. “Cameron is such an inspiration because he beat the odds. The world and modern medicine would marvel at his ‘lucky’ recovery, but as Christians, we know how and why God healed Cameron. We all have gifts and a purpose for being here, but Cameron fully embraces his purpose and lives it out daily.

“He will be an incredible ambassador for Mississippi College, but more importantly, an example of a Godly man heading out into the world to make a difference.”

Not many of his peers know about Smyly’s physical challenges, which is fine with him. But if he can inspire others with his story, he’s all in about sharing it.

“I want to have my own training facility one day. That’s my lifelong goal,” he said. “Until then, I want to train other people and inspire them to get out there and move.

“Movement should never be taken for granted.”