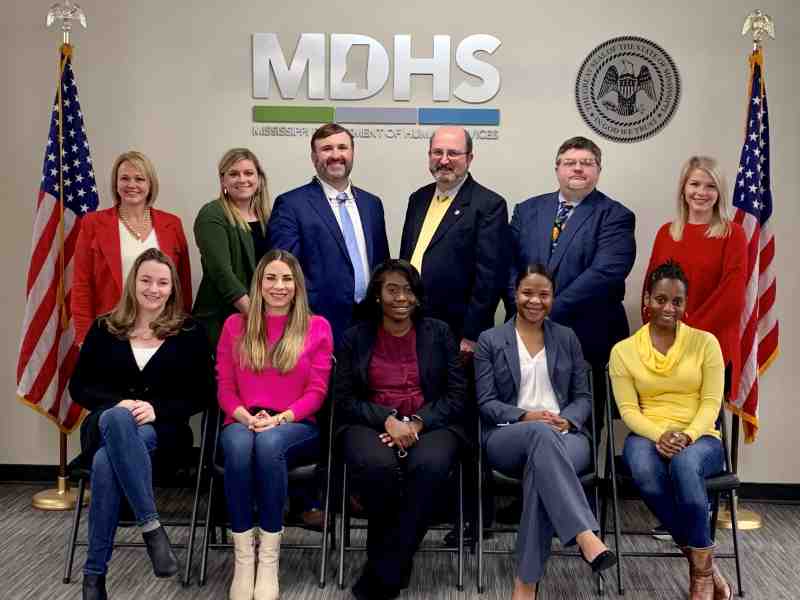 MC Law grad Bob Anderson, the MDHS executive director, is joined by his agency's staff. Those pictured are all MC Law alumni.

Bob Anderson, leader of the Mississippi Department of Human Services, is committed to dramatic improvements to the state agency.

From day one, as executive director, Anderson pressed for significant changes to enhance a large agency rocked by scandal before he took command.

Gov. Tate Reeves appointed the Mississippi College Law School alumnus to lead the large agency affecting so many Mississippians. It is a powerful agency as an economic driver in the Magnolia State. MDHS administers $1.3 billion in federal funds, including $600 million in Supplemental Nutrition Assistance Program benefits. Agency officials collect $350 million in child support payments. With offices in all 82 counties, the agency administers childcare services to families.

Anderson can’t do it alone at his Jackson office at 200 South Lamar Street. He’s assisted by an exceptional leadership team, including several MC Law graduates. With the staff’s help, “We are literally changing the culture of this agency.”

To speed changes, Anderson unveiled “Operation Restore Trust.” Its three guiding principles are integrity, compliance with state and federal law, and moving the agency towards excellence.

In March, Gov. Reeves named Anderson, 58, to head the agency. His appointment came after the former director was among six charged in a massive embezzlement scheme involving allegations of millions of dollars in misspent welfare money. A former assistant U.S. attorney, he served as chief integrity officer for the Mississippi Division of Medicaid. Earlier, Bob led the Public Integrity Division of the state attorney general’s office.

When he began work, the agency “was not in a good place,” Anderson said. He’s beefed up the compliance staff and other programs. He’s improved communications with employees. “I literally have an open door policy.”

He salutes law professors such as Mary Libby Payne, the former MC Law dean, and Lee Hetherington, who retired in May.

Payne opened every MC Law class with a prayer. “She was a child of the King and lived out her faith.”

His legal ethics professor told students, “we didn’t get to take a break from being believers.”

Anderson’s achievements are getting noticed at the Christian university’s law school, just blocks from the Mississippi Capitol.

“Bob Anderson is the right person to lead DHS at this crucial time,” said MC Law Dean Patricia Bennett said. “Bob has the integrity and leadership skills to restore credibility to the agency. He will lead without biases and political beliefs. Bob has a servant’s heart that’s based on his Christian beliefs.”

Anderson served as the president of the Christian Legal Society in Central Mississippi in recent years. He’s a role model for law students. “We are proud of our alumni for the many contributions they are making as leaders, especially in the area of public service,” Bennett said.

“It has been a pleasure to watch him build a great career,” Hetherington said.

MC Law Dean Emeritus Jim Rosenblatt echoes those sentiments. “I know that Director Anderson will restore faith and confidence in the operations of DHS for the benefit of Mississippi and its citizens.”

From a “top to bottom” review of agency programs to asking lawmakers in 2021 to increase temporary assistance to needy Mississippi families, there’s much on the to-do list. Teamwork is essential. Said Anderson: “My leadership style is all about collaboration.”

Hadley Gable Eisenberger (MC Law Class of 2014) is thrilled to build a great team in the Office of Inspector General. “I’ve thoroughly enjoyed mentoring them as they have become experts in their field.” MC Law, she said, prepared her well for a career at the Department of Human Services.