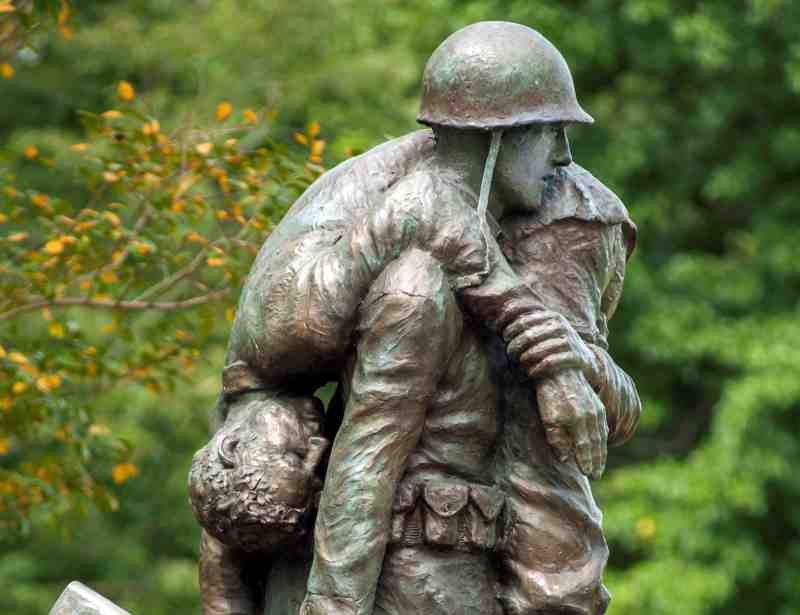 Mississippi College has enjoyed a long relationship with the U.S. military. This 2011 bronze sculpture, “Fallen Comrade,” by the late Sam Gore, former chairman of the Art Department at MC, is based on a pair of Clinton residents who served in the Korean War. It is on display in the Clinton Visitor Center off the Natchez Trace Parkway.

Mississippi College has enriched its student experience throughout its history through a strong connection to the U.S. armed forces.

From the organization of an extracurricular “military school” and military companies in the 1880s to the Choctaw band’s 1930 designation as the official band of the National Guard of Mississippi, to the V-12 Navy College Training Program that helped prepare students for officer training school during World War II, MC’s commitment to its students serving in the armed forces has been second to none.

According to its website, “Military Friendly© Schools strive towards and succeed in the areas that matter most in helping veterans make the transition from the military to school, and, ultimately, satisfying careers in the civilian world.”

The Christian University has achieved Military Friendly© status several times since the program was founded in 2003. According to Teresa Hill, director of Military and Veteran Student Services, MC was the only private university in the state to earn the designation for 2021-22, as reflected on the Military Friendly© website’s published institutions for this academic year.

“That gives us a unique standing for the metro Jackson area for veterans, dependents of veterans, and active/reserve military seeking local/commuter campus attendance for their degree objectives,” Hill said. “Whether the incentive of military enrollment was to aid in the ever-concerning cost of higher education, to secure a future in learning a military-honed skill or trade, or to fulfill the longing for travel and new horizons, the result reveals an innate willingness to serve and sacrifice.

“I believe Mississippi College is such an amazing fit for our veterans and military students since their actions align so perfectly with MC’s mission statement, specifically in regards to our encouragement for students to utilize their skill, talents, and abilities as they pursue meaningful careers, lifelong learning, and service to God and others. These students have either sacrificed directly or have sacrificed time with their family members who served.”

Hill said in the 2021-22 academic year, 112 MC students are either active military, veterans, dependents of veterans, or spouses of veterans using VA Education Benefits. Although this is not an all-inclusive number of active military or veteran members currently enrolled at MC, that number represents almost 4 percent of the Christian University’s entire student body.

In conjunction, MC facilitates military tuition assistance benefits that have been approved and awarded to current members of all branches of the U.S. Armed Forces. This benefit is typically $250 per semester hour or $4,500 per year, with each branch having its own set of criteria for approval and benefit amount. Also, with approved transfer evaluation, MC grants college credit to veterans for their applicable prior educational experiences in the military.

Hill said military students are uniquely positioned for academic achievement and success at MC because of their armed forces experience.

“The military assigns service personnel to jobs and assignments after they complete the Armed Forces Vocational Aptitude Battery Test, matching the best possible jobs and assignments to each enlistee,” she said. “These positions help the military members acquire technical skills that are highly transferable to academic settings.

“The military has a unique way of revealing skill sets of assertiveness, confidence, bravery, and leadership that create strong and highly capable achievers.”

As such, Hill said military students are amazing assets to the student body at Mississippi College.

“They are positive role models without even intentionally trying,” she said. “They are socially aware, having served in diverse units and likely having experienced foreign cultures. This opens them up to embracing compassion and understanding, tolerance and respect for individual differences.

“The military students are agents for social good who serve others. Their MC degrees will no doubt propel them into a future of continued service that had led them to begin their military careers in the first place.”

The Military Friendly© program is an advocacy vehicle to encourage civilian organizations to invest in recruiting, retaining, and advancing veterans as employees, entrepreneurs, and students. Military Friendly© is the standard that measures an organization’s commitment, effort, and success in creating sustainable and meaningful benefits for the military community.

About 2,000 organizations nationwide compete for the Military Friendly© designation. Their ratings are based on three sources: publicly available data from several federal agencies that monitor higher education institutions or federal contractors; proprietary survey data gathered through the Military Friendly© survey data verification process; and personal opinion data and feedback from veterans themselves, gathered through a short survey.