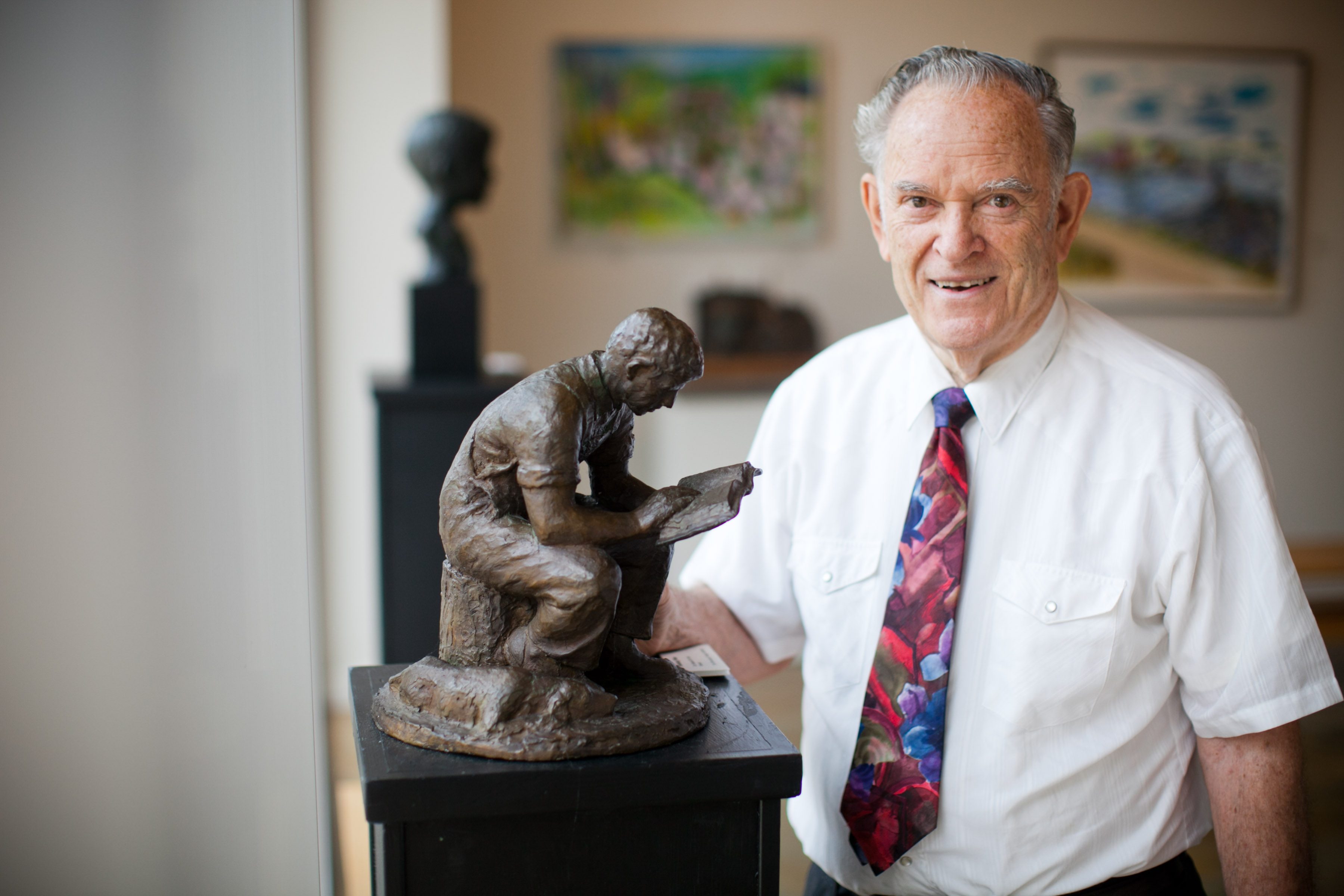 Samuel Marshall Gore remains an iconic art treasure in Mississippi. An extraordinary Christian artist, and mentor to many students for more than six decades, Dr. Gore has a sea of admirers around the globe.

The gifted 1952 Mississippi College graduate celebrates his 90th birthday in Clinton on November 19. The timing is right in 2017 to salute his extensive accomplishments over a lifetime with several major events, MC leaders say. It’s also the same year that Mississippi notes the state’s 200th anniversary.

Dr. Gore will be honored with several of his major works showcased at the Gore Gallery along with pieces produced by artists he influenced over the years. The show featuring the beloved Clintonian runs from November 6-December 15 at the gallery on the Clinton campus at 199 Monroe Street.

On November 6, Mississippi College art professor Carrie Reeves will present a lecture at 3 p.m. in the facility’s main gallery. Her talk will discuss his life’s influence on art and people. The founder and former chairman of the MC Art Department on the Clinton campus, Gore taught Carrie, who became an award-winning sculptor.

On November 17, Mississippi College will host a brown bag luncheon on the Clinton campus. A panel of speakers will include his daughter, Dr. Judy Gore, author Barbara Gauntt, and nationally celebrated Mississippi watercolor artist Wyatt Waters, one of Gore’s former pupils. People in the audience are invited to share their stories. The Friday event runs from 11 a.m. until 1 p.m.

A longtime “Clarion-Ledger” photographer and editor, Gauntt penned the book “Samuel M. Gore: Blessed with Tired Hands.” The University Press of Mississippi book is filled with Gauntt’s amazing photographs and words. It gives readers a rare look at the splendid works of the prominent artist during his long career. Her pictures show his magnificent sculptures to his beautiful paintings with MC art colleagues during a trip to Costa Rica.

Gore is “an absolute treasure,” Gauntt says, and calls him a “gift from God” who keeps on giving.

The festive occasion continues at the Gore Gallery on November 19. There will be plenty of friends, family members and other admirers wishing Sam a wonderful 90th birthday. There should be plenty of cake and refreshments around for the event. It begins at 1 p.m. and wraps up at 4 p.m. that Sunday.

Gore is the hands behind his bronze sculpture “Servant Savior” that sits in a visible spot on the Quad at his alma mater in Clinton. His bronze sculptures can be seen at the MC School of Law in Jackson and at the Clinton Visitor Center, among other places. His “Fallen Comrade” sculpture at the Clinton Visitors Center off the Natchez Trace Parkway remains a powerful tribute to USA military veterans.

Gore was thrilled to see the book come out about his life. “Blessed with Tired Hands,” he says, “tells of a long learning venture, with family and many other special people who have become part of me in bringing out my best.”

The birthday tribute to Dr. Gore is well-deserved, MC leaders say. “Dr. Sam Gore is truly a national treasure, not only because of his artistic genius, but because he has devoted his life to the MC Art Department,” said Ron Howard, vice president for academic affairs. “He has poured his heart and soul into preparing scores of artists to bring out their God-given potential.”

Gore’s “disciples are legion and his impact upon the arts in Mississippi and the nation is incalculably great,” Howard added. Simply put, Sam Gore “is truly a great man for the ages.”

Art patrons can visit the Gore Gallery Monday through Friday from 9 a.m. until 3 p.m. and from 6-8 p.m. Tuesday evenings. Admission is free. For more details, contact Gore Gallery Director Randy Jolly at 601-925-3880 or rjolly@mc.edu