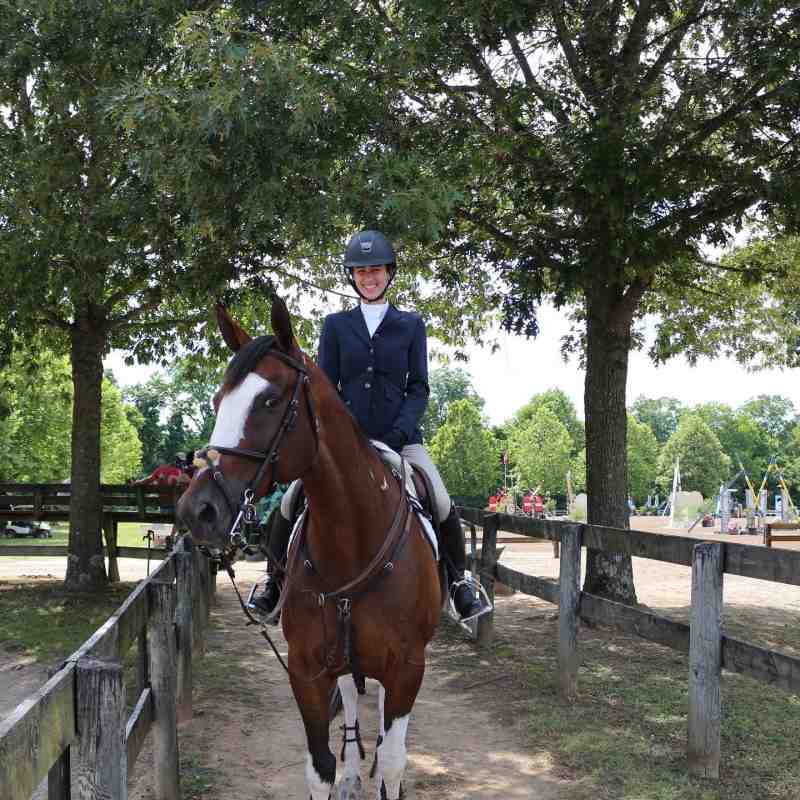 River is the name of her favorite horse during fall practices at Providence Hill Farm, Aleix Scott says.

“I think what I love most about riding is its ability to take my mind off the stress I am dealing with,” the Tennessee resident says. “It allows me to build a relationship with a horse I am riding. I can get on and ride and focus on what is in front of me, instead of worrying about schoolwork.”

A biology major, Aleix says her focus after graduation will be going to veterinary school. So riding horses is clearly a great fit.

MC’s equestrian team begins a new season making adjustments due to the COVID-19 pandemic. There are no competitions set this fall. But that’s not stopped the student-athletes from practicing twice a week to advance their skills.

“Riding gives me a goal to work towards,” Aleix Scott says. “It’s a never-ending challenge.”

Hanna Fowler, 19, a transfer student from Baptist College of Florida, is just as excited to be a Lady Choctaw.

Her passion for horses began as a high school student in the Sunshine State. Her favorite horse at Providence Hill Farm? The name is Oliver. “In the short time that I’ve been here, he is the horse that I have ridden the most, and I have just fallen in love with him.”

A Graceville, Florida resident, Hanna was first introduced to Mississippi College as a Fuge camper several years ago. "When I came here, I could just feel the Lord’s presence, and I knew this is where He was calling me to go to school,” says the psychology major. “MC was like a home away from home during the summer.”

Aleix Scott also pointed to Mississippi College as a Christian university as a big factor drawing her to enroll in August. “It would allow me to surround myself with like-minded people who would hopefully have a positive impact on my life.” A tour of Central Mississippi’s beautiful Providence Hill Farm convinced her she made the right choice.

Kaitlin Williams, 20, of Hernando is among the returning riders on the equestrian team. She cares for two horses, Tres and Cassini, at the farm this fall, but mainly rides Lew at practices.

A biology major, Kaitlin was initially attracted to Mississippi College because of the strength of its academic programs. She quickly discovered MC’s equestrian team is among the best in the South.

Coach Claudia Billups has been a tremendous help, the sophomore says. “Coach Claudia has improved my skills at both English and Western riding,” she says. “I love working with horses and learning all their different personalities.”