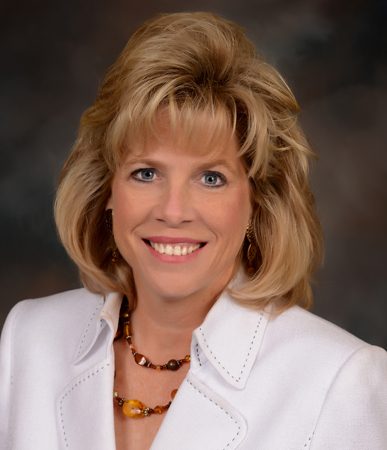 “Laura Jackson possesses extraordinary leadership abilities and substantial financial management expertise that will greatly benefit our university for years to come,” said President Blake Thompson. “We feel blessed to bring this MC graduate to join our administrative team as the university enters a new decade and approaches our 200th anniversary. The MC family is excited to welcome Laura home.”

At the same time, Dr. Thompson applauds retiring CFO Donna Lewis for her accomplished career and faithful service as a member of the Mississippi College administration. Lewis became MC’s chief financial officer a little more than 13 years ago.

“We know that Donna set a very high standard at Mississippi College and wish her the very best during her retirement years,” Thompson said. “We are convinced Laura Jackson will serve equally well as her successor.”

“I am incredibly grateful to have had Laura faithfully serve in my administration as one of my agency executive directors,” Gov. Bryant said today in his press release. “Laura has done a tremendous job managing the state’s budget and operating DFA. I wish her the best in her CFO role at Mississippi College. She will be a great asset to the university.”

A recipient of two MC degrees, Jackson manages an executive agency responsible for fiscal management and a wide range of other vital functions necessary to operate state government.

“I am forever grateful to Gov. Bryant for the opportunity to serve as the State Fiscal Officer and Executive Director of DFA,” she said. “Serving the people of this great state has been my distinct honor for over 30 years. While I will miss my colleagues in state government, I look forward to my new career at Mississippi College, my alma mater in my hometown.”

Jackson and her husband, Kevin, a 1988 MC graduate, have three children.

Prior to leading DFA, Laura served as deputy state treasurer under Treasurer Lynn Fitch. At DFA, she served as an advisor to the State Bond Commission. As State Fiscal Officer, she works closely with the State Treasurer and often is asked to advise the Governor and Mississippi Legislature.

Laura started her government career with the Office of the State Auditor in Jackson. She began as a staff auditor and eventually served as an audit manager.

Other significant leadership posts for Laura Jackson include her service as an advisor to the board for the Mississippi Center for Medically Fragile Children. Laura is a member of Morrison Heights Baptist Church in Clinton where she chaired its Finance Committee on several occasions.

Laura earned her bachelor’s degree in 1987 and her master’s in 1996, both at the School of Business at Mississippi College.