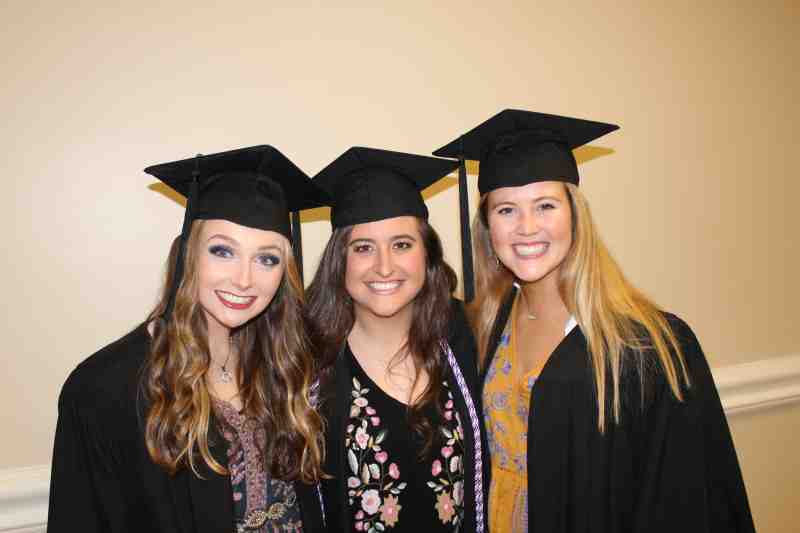 Mississippi College's Class of 2018 on December 14 included these three School of Nursing graduates. They are: Maggie Wren of Madison, Sammie Mack of Little Rock, Arkansas and Erin Wilson of Houston, Texas. Maggie is also a graduate of Madison Central High.

New Mississippi College graduates like Maggie Wren of Madison and Emily Manuel of Clinton reflect booming enrollment trends at the School of Nursing.

Wren, 23, found the perfect fit as a nurse in the new year at the Blair E. Batson Children’s Hospital in Jackson. Manuel, 25, first got interested in nursing after spending time in the hospital with her grandfather, who suffered a serious brain injury. She landed a job at Baptist Hospital.

The two Mississippians were among 92 School of Nursing graduates awarded bachelor’s degrees at Swor Auditorium on December 14. The big crowd of new Mississippi College nursing graduates receiving congrats from family members and friends is part of a trend.

MC School of Nursing Dean Kimberly Sharp sees more enrollment growth ahead as healthcare needs keep expanding for millions of Americans. That includes more patients who are aging Baby Boomers. The timing is right at Cockroft Hall headquarters as MC leaders pursue plans to create a new master of science in nursing degree.

“The development of a master’s program in nursing has long been a dream of the faculty and students of MC’s School of Nursing,” says Graduate Dean Debbie Norris. “Alumni in particular have strongly advocated for programs at the master’s level. It will provide access for students seeking a pathway to graduate study and onto a terminal degree.”

There are still several key steps along the way that MC School of Nursing leaders must follow. First, approval is needed from the Mississippi Institutions of Higher Learning. The new master’s degree would begin in Fall 2019 if the MC request is granted.

Like all new higher education programs in the USA, it will take a few years of hard work to gain national accreditation. It’s just a part of the process that involves extensive paperwork and long hours for administrators. For example, MC’s physician assistant program was launched in 2011 as the first in the Magnolia State. Now, the rigorous 30-month program for 90 graduate students is nationally accredited.

The first track Mississippi College is pursuing is the clinical nurse leader (CNL). “Thus far, no program like this exists in Mississippi,” Norris said. “This track would allow nurses to fulfill advanced nursing practice competencies while remaining in their place of employment.”

Dean Sharp is proud of the accomplishments of MC School of Nursing students on national standardized exams they need to pass to enter the profession. The pass rate posted on the Mississippi Institutions of Higher Education website stands at 94 percent. “I expect that we will be even higher this year when the 2018 results are posted in March.”

Some new grads like Leslie McAdory, 41, took all of their MC nursing classes on-line. The Pearl resident earned her nursing diploma in December 2018 in the RN to BSN degree program. She works at MEA administrative offices in Ridgeland. McAdory believes her Mississippi College diploma will help her advance in the nursing profession.