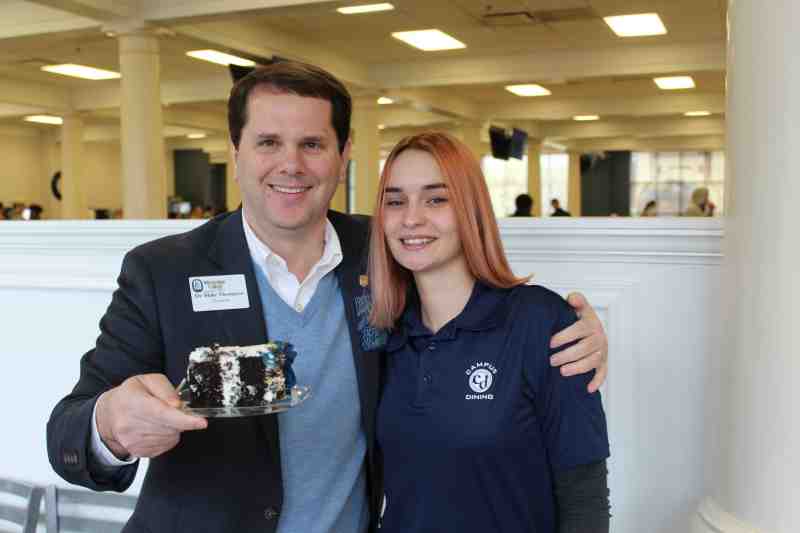 On January 22, President Blake Thompson took part in his first Founder's Day at MC. He stopped by the MC cafeteria for a slice of cake. Savannah Moore, an employee with Campus Dining, the university's food service provider, joins Dr. Thompson for a photo Tuesday afternoon.

Cups of hot coffee on a chilly winter afternoon along with pieces of cake tasted great at Mississippi College’s Founders Day.

From President Blake Thompson to scores of students stopping by the cafeteria for the delicious treats, the Founder’s Day participants enjoyed every moment.

Steven Smith, the college pastor at First Baptist Church Jackson, played a major role at his alma mater for the annual event. A member of the 1992 MC Hall of Fame, he delivered the keynote speech at a chapel program at First Baptist Church Clinton. The activity showcases the university’s beginnings, dating back to its chartering in 1826, as well as key developments in the modern era.

“This is a good way of remembering our history,” says freshman Carmen Harris, 17, of Vicksburg.

For the Vicksburg High graduate, it marked her first MC Founder’s Day. And it was the inaugural event for President Thompson, who began his tenure as MC’s 20th president on July 1.

The Warren County resident met Dr. Thompson for the first time at the Phillips House during a Welcome Week reception for new students.

Surviving tough times like the Civil War and the Great Depression, Mississippi College boasts many accomplishments during its nearly 200-year history. Enrolling 5,138 students, MC today is an attractive institution for a variety of reasons, school supporters say.

“I like its environment,” said sophomore Esther Urbina, 19, of Pearl. “It’s awesome.”

An award-winning faculty combines with a close-knit family atmosphere to make MC a viable option to pursue higher education degrees. And national publications continue to give the institution high marks. In the Fall, “U.S. News & World Report” rated Mississippi College No. 16 as a “best value” among the South’s regional universities.

At the January 22 Founder’s Day, MC students received stickers spelling out the university’s core values. They include: excellence, stewardship, service, respect and integrity. Others are inquiry, knowledge and fidelity.

Mississippi College’s commitment to service was seen at Tuesday’s blood drive on the Clinton campus to benefit Mississippi Blood Services. Blood donated Tuesday and Wednesday goes to more than 40 hospitals around the state. Blood supplies statewide are low and need a boost, MBS officials say.

On Monday, MC Law School students in Jackson participated in a Habitat for Humanity project to refurbish homes in the capital city. It was among many community projects across the state and nation during the Martin Luther King Jr. holiday.

President Thompson stopped by the cafeteria for a few minutes to welcome visitors. Savannah Moore, an employee with Campus Dining, the university’s food service provider, was delighted to hand the president a slice of cake. “I love his family,” she said.

Dr. Thompson, his wife, Jana, and their three children have been warmly received since arriving in the summer at Mississippi College.

Produced by MC graduate Paul Bonds, the BeanFruit coffee was enjoyed by university constituents at Founder’s Day on the Clinton campus.