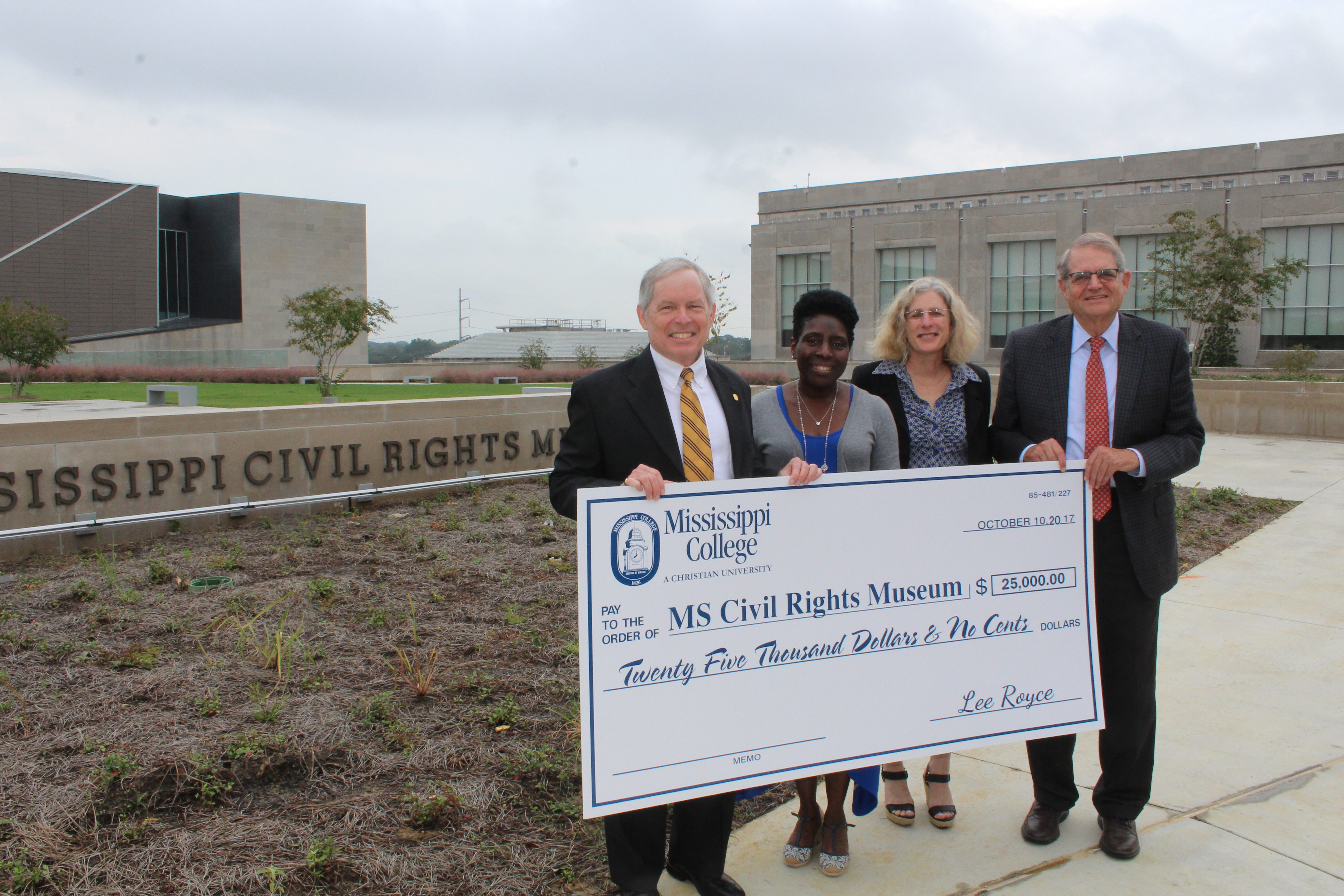 Mississippi College President Lee Royce presents the university's $25,000 check to leaders of the two new museums in Jackson. Mississippi Civil Rights Museum director Pamela Junior, Katie Blount, director of the Mississippi Department of Archives and History, and Kane Ditto, chair of the department's board of trustees. The museums will open to the public on December 9.

Mississippians celebrating the state’s Bicentennial will welcome the opening of two new museums.

The Mississippi Civil Rights Museum officially opens in downtown Jackson on December 9. Located a few yards away, the Museum of Mississippi History will be unveiled before a sea of visitors that Saturday. The grand opening at 11 a.m. will include activities from live music to guest speakers and food trucks.

Mississippi College leaders on October 10 donated $25,000 to enhance the two museums that showcase the state’s two hundred-year history. More than 22,000 Mississippi artifacts will be displayed over 200,000 square feet of space.

With that sense of history in mind, President Lee Royce is delighted to present the check to support both museums.

“We applaud the impressive educational opportunities afforded by these two new museums,” Royce said. “We have served and thrived in Mississippi, and we are honored to participate in this great Bicentennial project.”

Mississippi College survived the Civil War, the Great Depression and two world wars. Opened in 1860, historic Provine Chapel became converted into a hospital for the wounded troops of Northern Gen. Ulysses S. Grant. MC today enrolls 5,121 students at its main campus in Clinton and MC School of Law in Jackson.

MC offers more than 100 academic programs. The majority of the Christian university’s students are from Mississippi. But they also come from 30 other states. MC’s 261 international students come from 43 countries, led by China, India, Saudi Arabia and Nepal.

Museum leaders including former Jackson Mayor Kane Ditto applaud the strong support coming from the state and private sector. More than $18 million in private donations has been raised to benefit the two museums. The state committed $90 million, primarily from the Mississippi Legislature.

Ditto believes the two museums located in the heart of Mississippi’s capital city will play a significant educational role for generations to come.

“It is important for the state to tell our story honestly and fully,” Ditto said. He serves as president of the Board of Trustees of the Mississippi Department of Archives and History.

“These museums will give all Mississippians, and especially young people, the opportunity to understand and appreciate what has come before them and inspire them to make history themselves,” noted the former Jackson mayor.

The Mississippi history museum will feature the story of Native Americans, speak to technology advances in agriculture, touch on its diverse culture, detail the state’s struggles as well as highlight educational and healthcare accomplishments.

Vice President for Academic Affairs Ron Howard applauds the opening of the two new museums, and Mississippi College’s role in helping the fund drive. “MC is happy to contribute to making the history of our state better known to the rising generations. We can all learn from the past.”

Mississippi’s historical experience, Howard said, “teaches that we all must work together and respect each other’s freedoms and rights in order to advance the quality of life for all our people.”