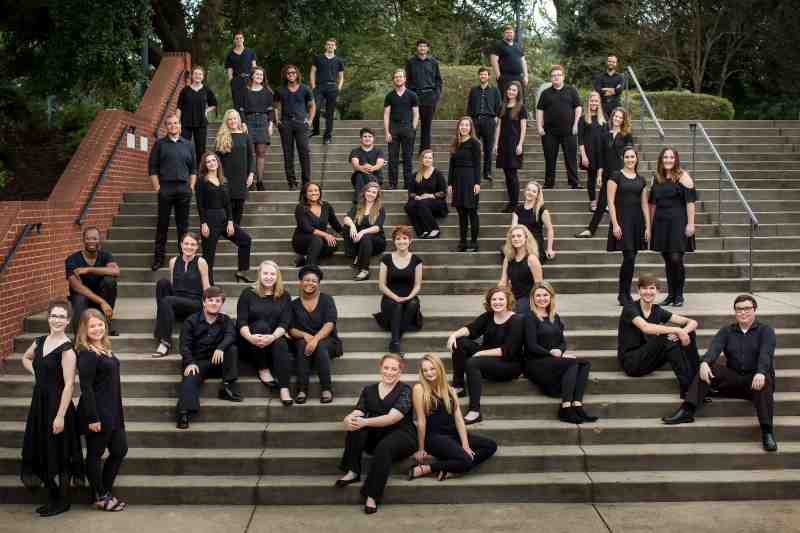 Every December, the Mississippi College Singers celebrate Christ’s birth with Festival of Lights performances at the university’s Provine Chapel.

The COVID-19 pandemic resulted in numerous scheduling changes on the Clinton campus and at universities across the nation to mitigate the spread of the coronavirus.

With a 2020 Festival of Lights not occurring in the historic chapel, MPB television production leaders invited Nabholz to help them edit the December broadcast featuring music and readings from the scriptures.

The 2017 MPB broadcast won a Regional Emmy Award for best live recording. Taiwo Gaynor, the assistant director of television at MPB, is thrilled to be a key part of this new production featuring the MC Singers.

“The Festival of Lights has become one of the most cherished end-of-year productions. And while a lot of the work we do has been shuffled because of COVID, I think this will be a great gift to our viewers that have been dealt with a very difficult year,” Gaynor said.

The statewide broadcast on eight MPB stations, including Jackson, also reaches viewers in portions of neighboring Tennessee and Alabama. The show will spotlight the 35th anniversary of the Festival of Lights tradition at Baptist-affiliated Mississippi College.

MC Music Department Chair Angela Willoughby is delighted to see the Christian university team with MPB once again. “We are honored and humbled that they value this collaboration and the quality of the performances.”

Dr. Willoughby is thankful to MPB director of television John Gibson and Gaynor for making this mutually beneficial partnership possible. Taiwo has served as lead producer on the Festival of Lights television project since 2016.

Meanwhile, Dr. Nabholz, the university’s director of choral activities, is busy leading MC Singers rehearsals this fall. The award-winning student choral group is preparing for their upcoming Festival of Lights: Thanksgiving recital on November 15. Forty members of the MC Singers will perform before a limited university audience in the Jennings Hall courtyard. The 3 p.m. Sunday concert will be broadcast on MC Music Department YouTube stations at a later date.

Freshman Emilia Miceli, 18, of Brandon says she loves being a member of the MC Singers. “It is a very warm and inviting environment,” says the Northwest Rankin High graduate and MC nursing major. “In Singers, I feel an expectation to do my best, but I also feel very comfortable in practice.”