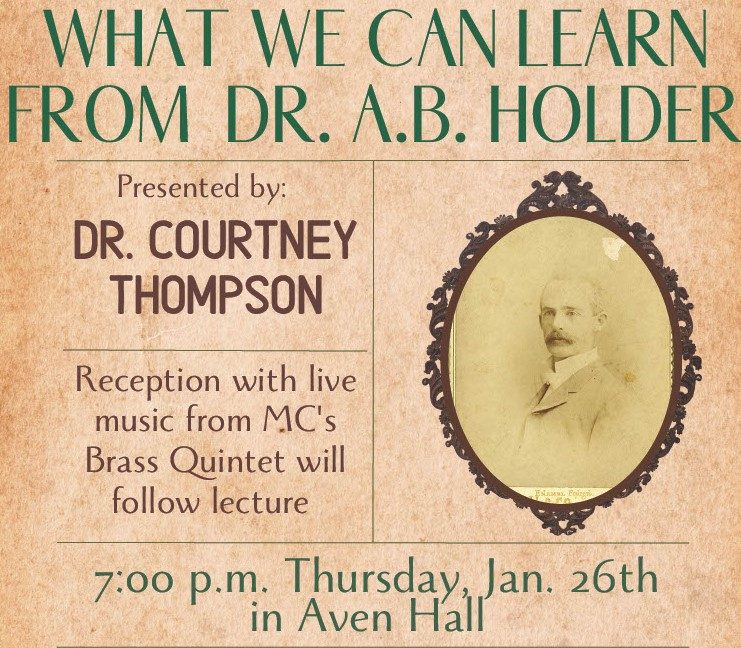 This curiosity forms the basis of a lecture series on the Mississippi College campus conceived by Steven Patterson, associate professor of history and political science, called “What We Can Learn from . . . “

“I conceived of this series to try to get some intellectual fresh air coming into the campus,” Patterson said. “We’re a small department, and students need to hear voices other than our own. They need to hear some professors from different colleges talking about their research.”

Supported by a grant from the Mississippi Humanities Council and sponsored by the Arts Council of Clinton and the School of Humanities and Social Sciences at MC, the lecture series present opportunities to learn about someone that attendees didn’t know existed, Patterson said.

“They are subjects that are engaging and substantive and will stick with you,” he said.

The next presentation in the series is about a little-known 19th-century physician whose descriptive casebook offers a window into the emotions of caregivers. Presented by Courtney Thompson, associate professor in the Department of History at Mississippi State University, “The South’s Greatest Surgeon: What We Can Learn from Dr. A.B. Holder” is scheduled for 7 p.m. on Thursday, Jan. 26, in Aven Hall.

“This should appeal to premed students and those in the humanities,” Patterson said. “It’s something that would be of interest to people in Clinton as well.”

Patterson met Thompson, who holds a bachelor’s degree from Harvard University and two master’s and a Ph.D. from Yale University, via Zoom when she was invited to discuss her recent book, “An Organ of Murder: Crime, Violence, and Phrenology in Nineteenth-Century America.”

“She’s a terrific speaker, and since she’s only two hours away at Mississippi State, I asked if she would come to lecture,” he said. “Her latest research is on Dr. Holder, whose papers are held at MSU.”

Born in Lafayette County in 1860, Holder grew up in the post-Reconstruction South as the favored eldest son of a formerly well-off family. He attended the University of Mississippi, and after completing a single three-month term of classes at Missouri Medical College, passed his licensing exam and began private practice in rural north Mississippi.

After three years of private practice, Holder returned to school and received his medical degree from Tulane University. He practiced medicine at the Crow Agency in Montana, studied medicine in New York, and practiced and conducted research in Memphis before dying unexpectedly at only 35 years of age.

Holder’s historical value lies in his casebook, which he kept from 1883-87 while in Mississippi and from 1980-94 while in Memphis.

“Typically held as a component of family papers, the collected papers of a physician like Holder are incredibly valuable for doing the social history of medicine,” Thompson said. “I learned through a close reading of Holder’s casebook that it offered an opportunity to examine an understudied aspect of the history of medicine: the history of emotions.

“Holder’s expressiveness as a writer, which I found so immediately striking, meant that he used his medical texts not only to record the details of his cases and his patients’ illness, but also to express his emotional response to his patients and their suffering. What is unique about him and his casebook was his introspective approach to medical record-keeping, which included long musings about the pain the patients and their families experience, as well as hints at his own sentiments.”

Thompson’s incisive presentation on Holder is representative of a lecture series designed to have a broad appeal, from the enduring appeal and legacy of oft-overlooked Blues Hall of Fame inductee Big Bill Broonzy – the topic of the first presentation last fall by Dr. Kevin Greene, a professor of history at the University of Southern Mississippi – to youth activism in the Civil Rights Era by Daphne Chamberlain, vice president for strategic initiatives and social justice at Tougaloo College, and the enduring appeal of the mythical worlds of renowned author J.R.R. Tolkien by Christopher Snyder, professor of history and director of British studies at MSU.

Dr. Jonathan Randle, dean of the School of Humanities and Social Sciences at MC, said the school is excited to invite faculty, staff, students, and members of the Clinton community to the series of talks organized by Patterson.

“Some of our state’s top scholars will be presenting on ways that their academic disciplines and their research projects can help us understand the current questions and debates that we face in our own cultural moment,” as well as ways that “the humanities enrich and inform our lives,” Randle said.

Each presentation is followed by a reception with live music. The event is free and open to the public.

Patterson said the lecture series represents another avenue for MC to display its pledge to academic excellence and commitment to the cause of Christ.

“If there is a perception of MC as being on an island, we must do as much as possible, as Christians, to reach out to the surrounding community and show that we are engaged in an academic conversation with the wider world,” he said.