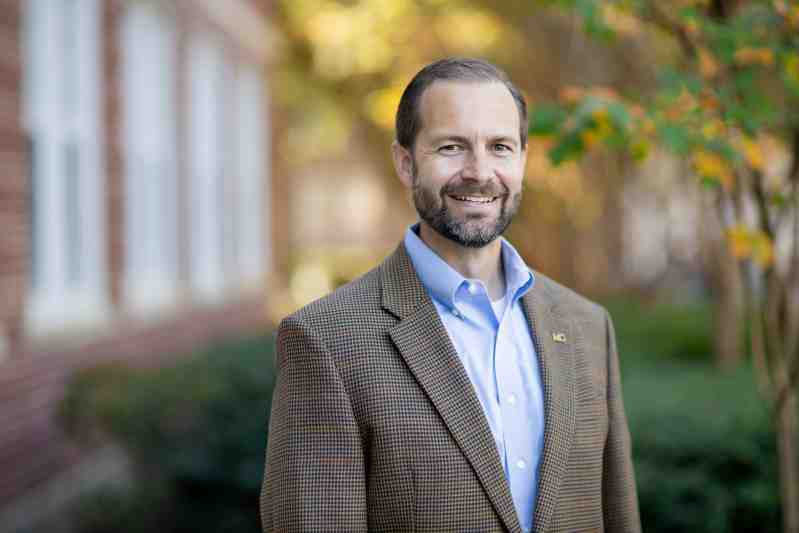 “So whether you eat or drink or whatever you do, do it all for the glory of God.”

If this instruction in the apostle Paul’s first letter to the Christian church in Corinth is to be properly followed, then every single thing we do – including how we relate to the world around us – could be considered an act of worship to the Almighty Creator.

It’s a paradigm-shifting concept of ethics that has been turned into a textbook cowritten by a Mississippi College staff member and now being used in numerous Christian religion courses.

“Ethics as Worship: The Pursuit of Moral Discipleship” by Dr. Mark D. Liederbach and Dr. Evan Lenow offers a fresh, comprehensive perspective to the concept of Christian ethics.

“One of the key distinctions of our book is in its title,” said Lenow, director of church and minister relations and director of event services at MC. “We’re approaching ethics as an act of worship to God in a 1 Corinthians 10:31 kind of way.

“We use the phrase sometimes described as ‘Whole Life Discipleship’ – everything about our lives is an act of discipleship and growing in our knowledge of God and our conformity to the image of Christ. That’s what 1 Corinthians 10:31 is all about.”

The book lays the foundation of what the term Christian ethics actually means, then applies that principle to suggest the proper Biblical responses to some of the most polarizing social issues of our day. No “hot button” topic is spared discussion, from social justice engagement, environmental stewardship and capital punishment to abortion, physician-assisted suicide and disordered sexuality.

“Life isn’t simply about doing right or wrong,” Lenow said. “It’s about how best can I worship God.”

While Liederbach and Lenow’s collaboration on “Ethics as Worship” goes back six years, their friendship extends much further than that. The two met when Lenow was a young graduate student and Liederbach a brand-new faculty member at Southeastern Baptist Theological Seminary in Wake Forest, North Carolina. Lenow ended up taking several courses taught by Liederbach, who ultimately became Lenow’s Ph.D. advisor.

Liederbach said the idea for the book came from his interaction with the Scriptures while developing his ethics courses at Southeastern.

“In particular, 1 Corinthians 10:31 and Ephesians 2:1-10 were seminal passages, not only for developing a Christ-centered ethics, but particularly one that is focused on our lives responding to the Gospel in a manner that seeks to maximize the glory of God through ‘whatever we do’ and in all our ‘good works,’” said Liederbach, professor of theology, ethics, and culture, dean of students, and vice president for student services at Southeastern.

Naturally, when Liederbach approached Lenow about joining him on the project, there was really only one response.

“At least half of the books he has written have been coauthored by former students and friends of his,” Lenow said. “I considered it an honor that he would ask me to join him in this process.

“This is the most significant project either one of us has undertaken.”

P and R Publishing in Phillipsburg, New Jersey, a publisher of books that “promote Biblical understanding and Godly living,” contracted with the duo on the project, which Lenow said serves to fill a significant hole in the study of Christian ethics today.

“When we first started this project, there was a void in the literature of Christian ethics,” he said. “The big, standard texts everyone was using were getting older and had reached the point where they were no longer being updated.

“In a field like ethics that’s constantly evolving and issues are constantly changing, there needed to be something more current.”

Lenow said the authors also felt there was a weakness in the foundational component of textbooks related to ethics from the Christian perspective.

“These books dealt really well with the issues, but they didn’t lay the foundation of how to think about ethics, how to incorporate the interpretation of Scripture, the role of the Holy Spirit – all of what we call the ‘meta-ethical foundations,’” he said. “The other books didn’t spend significant time on these concepts, but that’s something we really wanted to do and do well.

“We wanted to build that foundation so that, when you get to the real issues, there are no surprises. You understand where this is going to go because you understand how to think about ethical issues.”

Liederbach credits Lenow for his commitment to the book’s original concept and his tireless dedication to the project.

“There are several elements in any good partnership,” Liederbach said. “The first is a shared heart for a Christ-centered mission. The second is prayerful dependence on the Holy Spirit. The third is a commitment to have Scripture drive our ideas, and not the other way around. And finally, a shared trust that fosters a context of pushing on each other’s ideas and not being afraid to challenge one another to doing our work better on the next draft than on the previous one.

“I learned a lot from reading not only his critiques of my work, but his joyful exploration of topics he was more naturally interested in researching. It has been a great experience to trust the Lord, pray, think, and write with Evan.”

Although just launched Aug. 25, the book already has been adopted at several schools, including Southeastern, the Ohio Theological Institute in Cleveland, Cedarville (Ohio) University, and North Carolina Wesleyan University in Rocky Mount, just to name a few.

“I am excited to incorporate this book into my classes because it is Biblical in its model, thorough in its treatments, and practical in its course,” said Dr. Paul Morrison, director of the Ohio Theological Institute. “By rooting ethics in worship, Liederbach and Lenow show that the task of ethics is neither theory nor practice alone.

“Many ethics textbooks only work through faddish issues, while others never move into the pews of the local church. This work offers a rooted framework for understanding what God would have His church do and be in the world.

While designed as a textbook, “Ethics as Worship” was also written for pastors, church leaders, and church members interested in “digging deeper” into ethical issues, Lenow said.

“The biggest thing we want people to take from this book is that ethics is not about following a bunch of rules,” he said. “Ethics is about God and how can I maximize my worship of our Creator. As we say in the book, ‘The study of ethics, then, is not primarily about choices, acts, results, or even obeying the commands of Scripture (though we believe that doing do is crucial). Ethics is about God.

“’It is about maximally adoring Him and rendering to Him all that He is due from all that He has made. And it is about our doing so both individually and corporately.’”

While he said it is gratifying to see a project he has worked so hard on for so long finally come to fruition, it’s the personal connections the book has engendered that bring Lenow the most satisfaction.

“My church, Morrison Heights, asked me if I would teach through the book this fall,” he said. “To stand before my fellow church members on Sunday nights and teach it, to have people buy copies of it, read it, and ask questions about it, has been very rewarding for me.”

Print editions of “Ethics as Worship” are available online at amazon.com, prpbooks.com and christianbook.com. A digital version of the book for Kindle is also available at amazon.com.