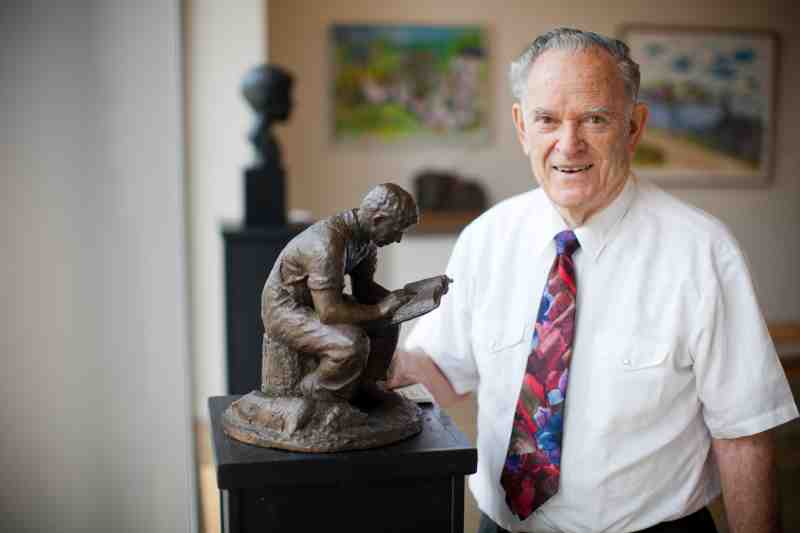 A nationally celebrated Christian artist for more than six decades, Sam Gore will be honored at Mississippi College’s summer commencement.

The August 4 event marks the latest tribute for the illustrious Mississippi sculptor. Still going strong at age 90, Dr. Gore continues to teach a sculpting class at his alma mater in Clinton. He turns 91 in November, but has the energy and creativity of people half his age.

Accolades keep pouring in for the 1952 MC graduate and former chairman of the university’s Art Department.

“Sam Gore is a man of great faith and unparalleled service to both Jesus and the arts,” says Ron Howard, vice president for academic affairs.

“His work in a variety of mediums is nothing less than exquisite,” Howard added. “He is a national treasure, whose teaching skills touched the lives of thousands of students. Many of them have gone on to distinguished careers in the arts.”

The Founding Father of the Mississippi College Art Department in the 1950s, Dr. Gore became the focus of the book “Samuel M. Gore: Blessed with Tired Hands.” Penned by award-winning photographer Barbara Gauntt, now a “Clarion-Ledger” editor, it’s filled with her wonderful pictures of the MC luminary and his splendid art pieces. University Press of Mississippi published the book two years ago.

The August 4 graduation at the A.E. Wood Coliseum features guest speaker Blake Thompson, Mississippi College’s new president. About 241 MC students will receive diplomas that Saturday. But putting the spotlight on Gore made the event in the Christian university’s basketball arena more special.

Sam Gore has meant so much to his hometown, says Clay Mansell, a Mississippi newspaper executive and a leader with the Clinton Chamber of Commerce.

“Sam Gore is one of the individuals who is hard to accurately measure or fully capture the impact he’s had on Clinton and Mississippi College,” says Mansell, an MC alumnus. “He’s a game changer and life shaper for many people and the community as a whole.”

Two of his fabulous sculptures “Moses, Deliverer of the Law” and “Christ, Fulfillment of the Law” adorn the exterior walls of the MC Law School.

“Dr. Sam Gore is a legend,” Rosenblatt said. “His teaching has touched the lives of many. His work has inspired and encouraged countless folks. His production has been simply incredible.”

The immense bronze sculptures are destination points for visitors from across the globe to the MC Law School in downtown Jackson.

“His work will live on for centuries and continue to bless generations to come,” Rosenblatt said.

His sculptures such as “Servant Savior” near Provine Chapel are must-see stops on the Clinton campus. The Samuel Marshall Gore Gallery is named in his honor at Mississippi College.

Born in Coolidge, Texas in 1927, Sam Gore was the son of a devout Baptist preacher, the sixth of ten children. In 1940, the Gore family moved to Clinton when Sam was 13, and soon grew in his faith, along with his skills in art.