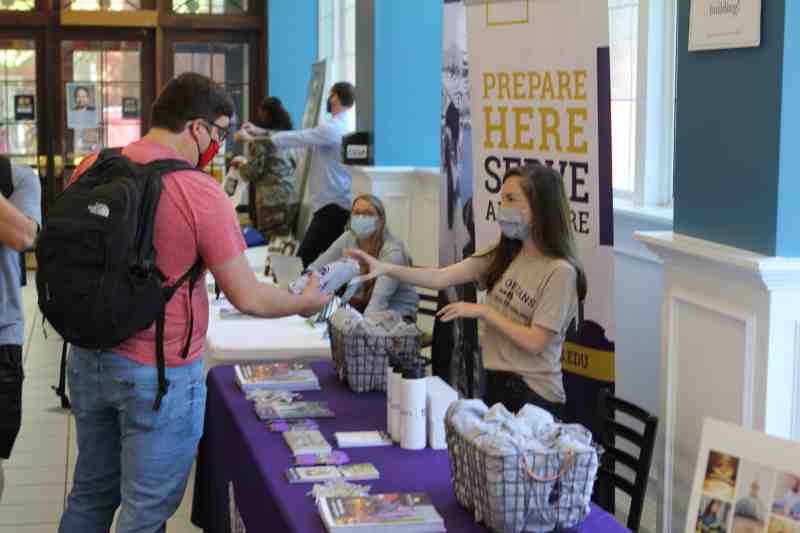 James Thornton, a fifth-year Christian studies major at MC and a New Orleans Baptist Theological Seminary recruit, receives information and a T-shirt from McKenzie Sizemore, an NOBTS representative, at Seminary Day in the cafeteria in the B. C. Rogers Student Center.

Jonathan Hancock knew he wanted to pursue ministerial service once he graduated from Mississippi College, but the Christian studies and philosophy major wasn’t sure which gospel-centered institution was best for him.

Each year, he attended Seminary Day, an annual showcase for representatives of various theological seminaries presenting information about their respective schools to undergraduate students at MC. Before attending the event, Hancock had not heard of Midwestern Baptist Theological Seminary in Kansas City, Missouri, but determined it would be the best place for him to pursue his commitment to Christ when he graduated from MC in 2018.

Three years later, after earning his master’s from MBTS, Hancock was back in the cafeteria on the MC campus to represent the seminary during this year’s Seminary Day Sept. 27. And he had a fresh recruit by his side: his younger brother, Noah, a fifth-year senior at MC, who plans to move to Kansas City upon graduation.

That evening, Dr. Shawn Parker, executive director-treasurer of the Mississippi Baptist Convention Board, delivered an inspirational message to attendees of the Church Related Vocation Banquet in Anderson Hall East. Given on behalf of the board, the CRV Banquet included music by Dr. Will Bishop and MC Worship Collective.

Hancock wasn’t the only MC alum to be on the recruiting side of the table during Seminary Day. David Morris, a full-time chaplain for the Mississippi Army National Guard, served as class president for MC’s Class of 1995. After graduation, the communication major attended New Orleans Baptist Theological Seminary, joined the National Guard and rose through the ranks to chaplain.

Thanks in large part to Morris’ connection with MC, the National Guard was participating in Seminary Day for the very first time.

“My ultimate goal in participating in Seminary Day is to get people interested in joining the Mississippi Army National Guard as a chaplain,” Morris said. “The Guard can be used as another ministry goal for students, just as they seek to do ministry in the civilian sector. They can be a pastor or a student pastor wherever they land, and then they can also, on weekends and two weeks in the summer, participate in ministry with our soldiers in the Mississippi Army National Guard.

“When I was here at MC, we didn’t have anybody come and introduce this. I would have loved to have had this as another ministry objective as I became a seminary student.”

That is the objective of Seminary Day – to help MC students interested in furthering their Christian studies choose an appropriate path for their ministerial interests.

Even students like James Thornton, a fifth-year senior Christian studies major who already has his mind set on attending the New Orleans Baptist Theological Seminary, can gain something from Seminary Day. In Thornton’s case, it was a NOBTS T-shirt – and the assurance his area of interest is covered by the curriculum at the Louisiana school.

“My main interest is talking to seminaries about what their opportunities are,” Thornton said. “I’m focused on New Orleans Baptist Theological Seminary because they have my main interest, which is children and youth education.

McKenzie Sizemore, the NOBTS representative with whom Thornton spoke, said her institution has enjoyed a longstanding relationship with Mississippi College.

“We love MC,” Sizemore said. “It’s one of our extension centers, so one of the good things about the connection between NOBTS and MC is, students can actually take classes through NOBTS right here on MC’s campus. So, we really appreciate the relationship we have with them.

“I’ve been focusing on MC because we really want to reach those who are interested and bring them to a city that’s very different, but not too far from home. New Orleans is a city that really has the most need for the Gospel. You’re really able to prepare so well for what you want to do long-term.”

She said having the opportunity to speak directly to interested students in the presence of other seminary representatives is an invaluable experience.

Morris said the value of Seminary Day to students and representatives alike can’t be overstated.

“I think it’s absolutely beneficial that we participate,” Morris said. “There might be a junior or a senior who are unsure of what they want to do. This gives them a career objective. There are opportunities for growth, and this gives them an idea, a few years down the road, they can be a seminary student.”