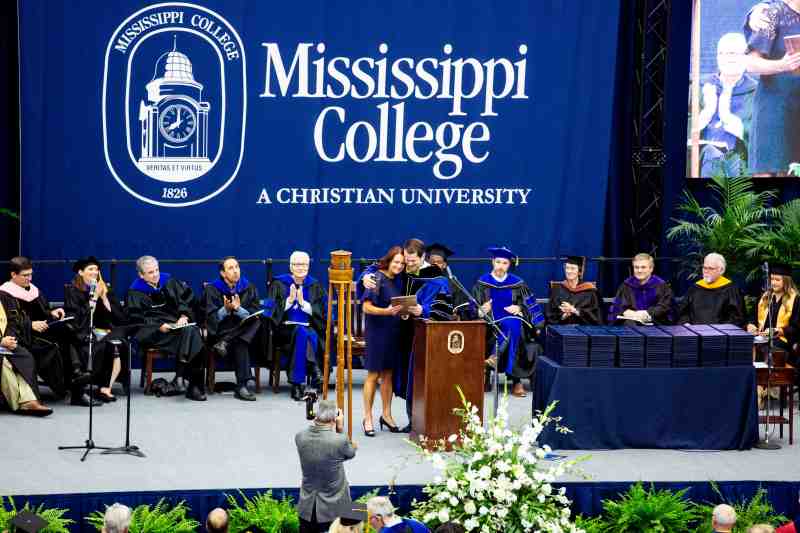 Shelia Carpenter exemplifies a servant’s heart, reflects Mississippi College’s mission and remains a friend to many on the Clinton campus.

Her work ethic, peers say, is off the charts at the Baptist-affiliated university. For her solid job performance at Nelson Hall year-round, Carpenter received MC’s Doc Quick Distinguished Staff Award.

The Clinton resident received the honor at the institution’s 2019 Spring commencement in May.

A key player in the Blue & Gold family, Carpenter serves as senior executive assistant to President Blake Thompson. Her office sits just a few feet away from the desk of MC’s 20th president. She’s also the recording secretary for the MC Board of Trustees.

Whether on the go with Inauguration Week activities, stepping up the pace during Homecoming Weekend or assisting a student, Shelia Carpenter never lets up until the job gets done. Faculty, staff, alumni, trustees, special guests and other university stakeholders applaud her tireless service.

“Shelia is noted among her peers as one of the hardest working staff members who is dedicated to her work, MC and to the cause of Christ,” Dr. Thompson said.

“What she does is important to her and it is shown in her precision to details and in her commendable work ethic,” he added. “Shelia serves Mississippi College with grace, selflessness and a positive attitude.”

The Mississippian embodies the “head, heart and hand” qualities that President Thompson often shares in speeches on the Clinton campus.

A Simpson Academy graduate, Shelia became an MC Choctaw in the 1980s. Earning her bachelor’s degree in business administration at MC in 1987, Shelia began working as a secretary on the Clinton campus one week after graduation. She received her master’s in education in 1989. Carpenter served as an assistant to the late Charles Martin, vice president for academic affairs.

Carpenter left the MC staff in 1995 to spend more time raising her children. She returned to MC in 2010 after four years as a secretary/teacher at Central Hinds Academy in Raymond. Shelia worked as secretary, administrative assistant and finally as senior executive assistant to President Lee Royce. President Emeritus Royce retired in June 2018.

The annual staff award is a tribute to the late Van “Doc” Quick. He was a beloved administrator at his alma mater and treasure in MC circles more than a half-century.

Student leaders sing her praises. “Shelia was like a mother to all of us,” says former Student Government Association President Anthony Jackson. The 2019 MC grad worked closely with Carpenter as SGA president the past year. “We built a wonderful relationship,” said the 22-year-old Mound Bayou resident. “She’s one of the most reliable, selfless and loving people at the university.”

Steve Stanford, vice president for administration, salutes her, too.

“We are delighted Shelia was recognized as this year’s outstanding staff member at Mississippi College,” Stanford said. “Shelia is a selfless, hardworking and committed professional. She is well deserving of this recognition since she clearly serves effectively, week after week, in an important and extremely challenging position.”

Whether Carpenter is promoting Dr. Thompson’s inaugural class of student ambassadors, or greeting office visitors, she’s a terrific ambassador for the Christ-centered institution.

Shelia Carpenter treats everybody in the university family with “respect and kindness and always in a professional manner,” President Thompson said. “She goes the extra mile to help in any way she can.”

Away from the Clinton campus, her own family remains a priority for Shelia and her husband, Greg. The Mississippian feels blessed as the mom of four children: her oldest sons, Kyle and Cody, are twins. So are her youngest sons, Cade and Caleb, both students at Mississippi College.