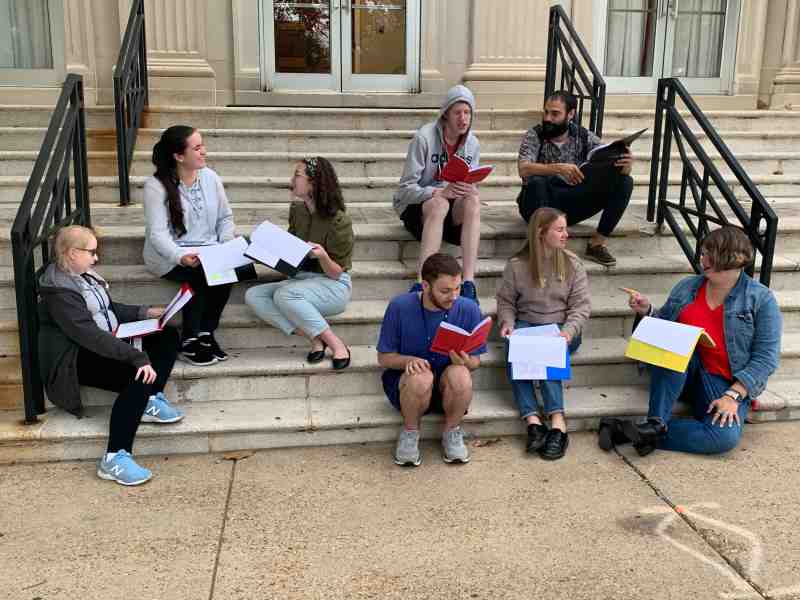 MC performers rehearsing lines from “It’s a Wonderful Life: A Live Radio Play by Joe Landry” on the front steps of the Aven Fine Arts Building include, in front from left, Larkin Dorris, Carson Jones, Vanessa Sharp, Gordon Huey, Chloe Newton, and Abby Duggar, and in back from left, Jake Parker and David Baker.

Fans of one of the most beloved holiday movies ever made can experience the story in a refreshing new way when Department of Communication students and faculty at Mississippi College perform “It’s a Wonderful Life: A Live Radio Play by Joe Landry” during the weekend before Thanksgiving.

The play – and Frank Capra’s classic film – are both based on a short story and booklet, “The Greatest Gift,” self-published by Philip Van Doren Stern in 1943.

Set in Radio Station WBFR in Manhattan, New York, on Christmas Eve 1946 – the year Capra’s well-known movie debuted – the play transports audiences to a bygone era when radio was the dominant home entertainment medium in America.

Dressed in authentic costumes of the period, the cast of talented MC students and faculty will perform as voice actors who bring to life the heartwarming story of how bumbling Guardian Angel Clarence teaches frustrated savings and loan operator George Bailey the real meaning of life, despite the machinations of insipid mogul Henry F. Potter.

All the well-known residents of bucolic Bedford Falls will be represented by MC actors in the postwar tale that, according to Dr. Phyllis W. Seawright, assistant professor of theatre at MC and director of the play, has never been timelier.

“When we started working through the script, we said, ‘Wow. It is so life-affirming,’” Seawright said. “The message of this play is, life is a gift, and you shouldn’t throw it away. What a message for us now as we struggle with the worries, anxieties, and fears of COVID.

“We know it’s God who loves us and God who made us and is taking care of us. That message is in the script. Life is not going to be perfect, life is going to be hard, but God still loves you and will protect and keep you.”

She said the play closely follows the plot of Capra’s masterpiece of the silver screen.

“It’s just like watching the movie, except you see it in your mind because it is a radio play in the grand tradition of all those radio scripts that were done back in the thirties and forties,” Seawright said. “Original cast members from the movies would do a shortened radio version of the movie as an extension of the marketing and popularity of the films of that era.

“I think that’s what inspired Joe Landry to write the play.”

MC students Todd McInnis, a senior from Baton Rouge, Louisiana, will perform as Bailey, and Emma Ellard, a sophomore from Madison, will portray his love interest, Mary Hatch. The play’s remaining 12 actors will handle all of the remaining voice roles.

“We’ve got all these kids doing the different character roles, so it’s a great adventure for an actor,” Seawright said.

Since the radio station’s play is “broadcast” from five microphones, Seawright said quite a bit of stage direction is required.

“It becomes a dance – everybody comes to a mic on stage and then fades away as their characters leave the scene.”

Other student cast members include:

John Mark Pinter, a senior from Forest, as Clarence the Angel and Harry Bailey;

Jake Parker, a freshman from Clinton, as Joseph, the superintendent of Angels, Freddie Filmore, the announcer, the Bridge Keeper, and Nick the bartender;

Emily Grace Boutwell, a junior from Brookhaven, as Violet Bick;

Ellen Whitman, a senior from Madison, as Rose Bailey;

Abby Duggar, a freshman from Montgomery, Alabama, as Pete Bailey, Sam Wainwright, and several other townspeople;

Larkin Dorris, a sophomore from Prairieville, Louisiana, as Zuzu Bailey, Young Harry, Young Violet, and several children from the town;

Carson Jones, a freshman from Madison, as Mrs. Hatch, Mrs. Thompson, Horace the Teller, and Tommy Bailey; and

Vanessa Sharp, a freshman from Clinton, as Charlie and Sadie Vance, and understudy for Rose Bailey.

Helping ensure the production flows smoothly are three student assistant directors: Victoria Hendren, a junior from Millington, Tennessee; Gracie P. Lee, a junior from Jackson; and Jenna Trotter, a junior from Collierville, Tennessee. Eric Lichterman, a junior from Memphis, Tennessee, and Eliza Mims, a freshman from Crystal Springs will run the Foley table for the sound effects typical in radio broadcasts of the era.

The play is expected to last about an hour and a half, including two onstage “commercial breaks” performed by the actors in old-time radio style.

"The show moves along so quickly. You don't even feel like you've been sitting there that long," Seawright said. "The writer was very conscious of modern audiences, so it moves along just like the film does.

“Anybody who knows the movie will enjoy coming to this show and hearing it and seeing it being played out.”

Fans of Capra’s version of the story have long been frustrated that the main antagonist, the robber baron Potter, never seemed to receive just punishment for his villainous deeds. Seawright hinted that the WBFR radio production might address this villainy in a slight variation from the movie.

Performing as Potter in the play will be Dr. David Miller, professor of English and philosophy and director of the Honors Program at MC.

“Potter is so amoral – he never acknowledges what he did and never gets punished for it,” Seawright said. “But there’s one little scene with Potter where why he’s doing what he does is explained just a little differently from the movie script. It still makes perfect sense for the audience.

Kat Goss, music director, a senior from Vicksburg, will play period Christmas music for an audience sing-along before the show begins. Attendees will be encouraged to join cast members in singing "Auld Lang Syne" as the story comes to its sentimental conclusion.

Seawright said she hopes the production will remind audiences of what’s most important during the Christmas season.

“I want them to come ready to celebrate Christmas and I want them to leave the show knowing that, as Clarence tells George Bailey, ‘You really had a wonderful life. Don’t you see what a mistake it would be to throw it away?’” she said. “I really want people to stop and think about how wonderful life is.

“That may sound sappy on the surface, but after the year-and-a-half, we've gone through, I don't take anything for granted anymore.”

Tickets cost $10 each for general admission, $7 each for senior adults or MC faculty, staff and students, and $4 each for groups of 20 or more. Cash and check only will be accepted. To purchase tickets, call 601.925.3453 or email seawrigh@mc.edu.