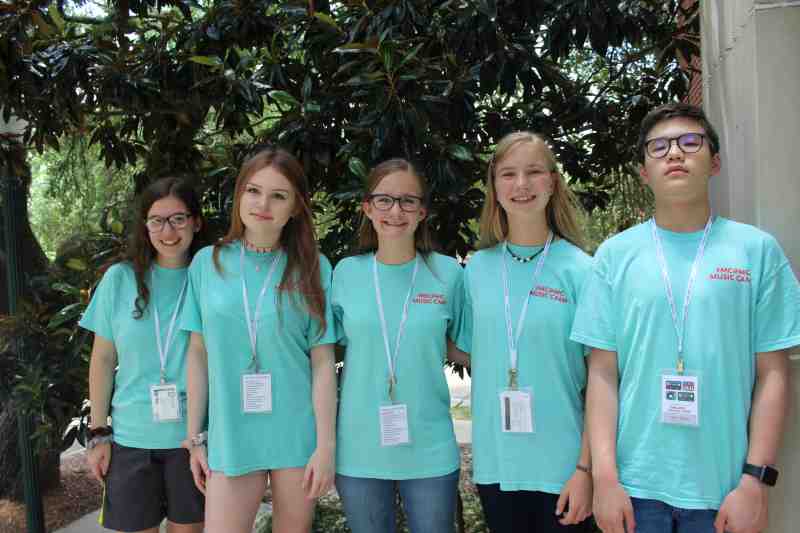 Pictured on the Clinton campus are Mississippi College summer music campers: Laura Nabholz, 16, and Kathryn Knupp, both of Clinton, sisters June Durham and Lily Durham, 15, both of Raymond and Colin Guan, 12, of Clinton. The photo was taken June 27. Sponsored by the MC Music Department, the camp attracted 46 young people from schools across the Magnolia State.

Driving to the Clinton campus doesn’t take long, the instructors are first-class, and the fun never ceases at Mississippi College’s summer music camp.

That’s especially true for a handful of Clinton area teens developing their musical skills for five days at MC in late June.

Kathryn Knupp, 15, feels "inspired" as she polishes her singing skills at the Aven Fine Arts Building and other spots at the Baptist-affiliated university.

Before enrolling, Kathryn was pretty familiar with the camp’s director. That would be her Dad, Bob Knupp, an MC music professor and organist at Galloway United Methodist Church in Jackson.

A repeat customer, Kathryn, 15, enjoyed her stay at the 2018 summer residential camp sponsored by the MC Music Department. The Clinton High student could become an MC Choctaw in a few years.

Another Clinton High Arrow, Laura Nabholz, 16, needs no introduction to one of the camp’s premier instructors. That’s her father, Mark Nabholz, conductor of the MC Singers. Her brother, Will Nabholz, will be an MC senior this Fall.

“It’s easy to make friends at camp," Laura Nabholz says. On a humid June 27 afternoon, she noted how camp instructors helped enhance her skills on the piano and with the clarinet.

For dozens of students, there’s no such thing as getting bored at summer music camp. From early mornings through late evening hours, campers stay busy. The music technology class has returned. Campers formed an online “technique contest" where they create videos of their scales and chord progressions.

Adding to the packed lineup of activities, several teen-age boys formed a band and are eager to entertain at the camp’s talent show.

The most Mississippians enrolled since 2011, there are 46 campers now attending music camp – from cities including Corinth, Olive Branch, Hattiesburg, Greenwood, Jackson and Meridian. As usual, Music Department Chair Angie Willoughby applauds the energetic teens she sees in classrooms and on stage.

“It is always inspiring to see so many young students really enjoying music! I’m continually impressed by the maturity and musical growth in the students who return year after year," Willoughby said.

Sisters from Raymond, June Durham, 13, and Lily Durham, 15, see no downside of upgrading their musical abilities. The girls are students at St. Augustine School in Ridgeland.

The possibility that music campers could become future Mississippi College students is one way of ending the summer season on an upbeat note.

“It’s like family," said Landon Crews, 16, a junior at Copiah Academy. “I feel welcome here," says the Crystal Springs resident. He’s versatile when it comes to his music skills. He plays the trombone and saxophone. And he sings, too.

“I like it here, and it’s not far from home," says Audrey Holt, 14, a Madison Ridgeland Academy student. She plans to consider MC as her college choice in a few years. “This is like a second home."