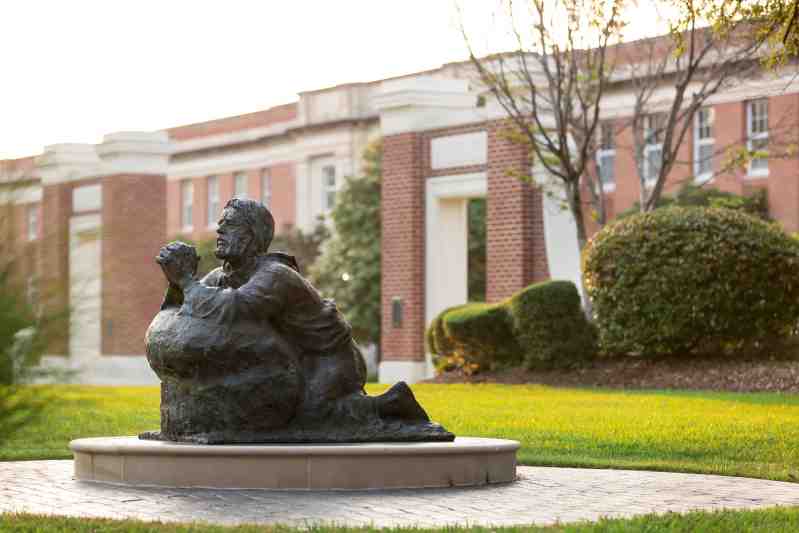 Sam Gore’s Christ in Gethsemane sculpture on the Clinton campus

The founding father of the MC Art Department in the 1950s, Dr. Gore, crafted what became his final sculpture on the Clinton campus. It’s a destination point for visitors in the Rhoda Royce Prayer Garden. The beloved artist attended the sculpture’s dedication about one month before passing away at age 91 in April 2019.

An April 15, 2021 ceremony will unveil the three disciples the distinguished professor and world-class artist desired to add to his last piece of work.

President Blake Thompson, the university’s Board of Trustees, Art Department professors, Gore family members, and students will gather for the event near Alumni Hall. The ceremony is set for 9:00 a.m.

“This work along with his others on campus is a celebration of his belief in God and the hopes he had for his students,” said Randy Jolly, director of the Gore Gallery. “He truly wanted them to excel in their craft as well as have an understanding of the love of Christ.”

It was a love this extraordinary man of faith “shared throughout his life with all who would listen and see,” Jolly said.

The sculpture’s Christ figure was finished and first installed in spring 2019.

“I enjoyed the process of having his daughter, Judy, other family, and those he mentored join together to bring these pieces to completion,” Jolly said.

“I think he would have really enjoyed watching those he loved and believed in come together. It was like watching the circle of his life gently come together and become complete.”

The Christ in Gethsemane sculpture illustrates Jesus praying in the garden prior to his betrayal, arrest, and crucifixion on the cross. The splendid bronze sculpture was completed following a university fund drive to support the addition of the three disciples.

It took Dr. Gore a year to complete the Christ in Gethsemane project. Sam finished work on two of the disciples. He was half-way done with a third before his death.

The Clintonian left a legacy of compelling Christian sculptures – from “Jesus & the Children” near the MC School of Education to “The Servant Savior” close by Provine Chapel. His magnificent bronze sculptures “Moses, Deliverer of the Law” in 2007, and its 2009 companion piece “Christ, Fulfillment of the Law” adorn exterior walls of the MC School of Law in Jackson.