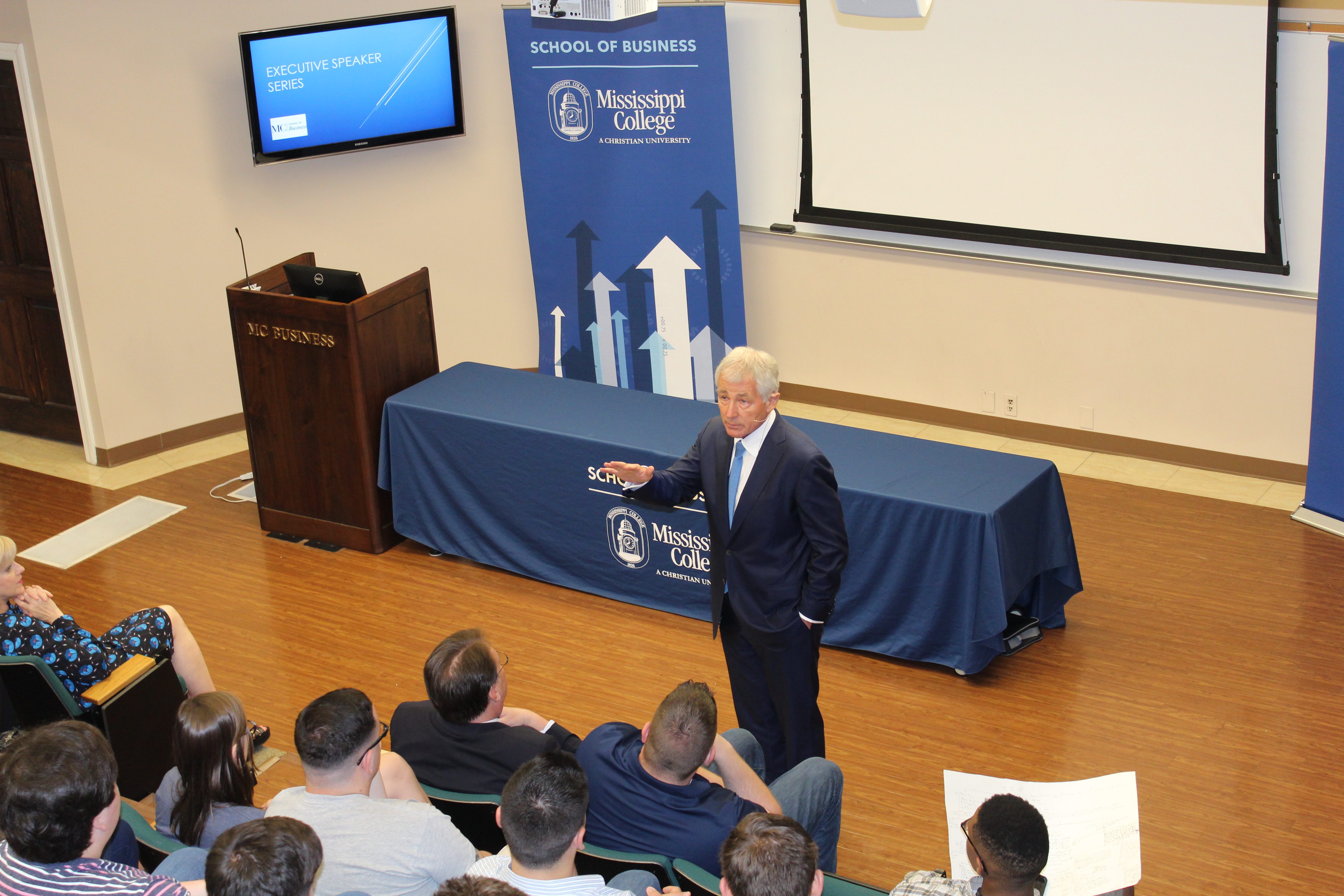 Former U.S. Secretary of Defense Chuck Hagel makes a point as he addresses Mississippi College students, faculty and guests at the MC School of Business on April 18.

Speaking to more than 400 guests on the Clinton campus, Hagel says there is no one paragraph solution to any of the major issues confronting the world, including terrorists like ISIS.

Dealing with threats from rogue nations like North Korea ruled by totalitarian leader Kim Jong Un will require the United States to partner with other major players in the region. “We will have to engage. We need China, South Korea and Japan.”

The decision to send a U.S. aircraft carrier into waters off the Korean peninsula is “a big deal,” Hagel told more than 400 scholarship banquet guests at Anderson Hall. “These are very complicated issues.”

Hagel served as Defense Secretary during the Obama administration in 2013-15. The former U.S. senator sees no simple solutions in sight for the Trump Administration.

Tackling threats posed by ISIS and other terrorists worldwide is among the biggest problems the United States faces, he said. Terrorism didn’t start with the September 11, 2001 attacks at the World Trade Center in New York City and the Pentagon in Washington, he noted. “It will take a long time to fix it.”

Following his introduction by Gov. Phil Bryant, Hagel spoke about the immense issues on the plate of President Donald Trump and his administration as he nears 100 days in office.

U.S. military strikes in Syria and Afghanistan earlier this month show President Trump’s willingness to use force if necessary.

But Hagel questions U.S. military involvement in the Middle East. It’s been nearly two weeks since the USA air strikes in Syria. He says using military intervention in the Syrian civil war should not be the first solution.

Still, steps need to be taken to stop the killing in Syria under the Assad regime, while dealing with Russian involvement in the country. “This will take a generation,” Hagel said. “But we must stop the killing.”

The Mississippi College event raised a record $412,975 for student scholarships. Since the program began in 2008, with former U.S. Senate Majority Leader Bob Dole as guest speaker, the events generated more than $3 million for scholarships.

A Republican, Hagel discussed other issues. He emphasized the need for the two major political parties to work together to address domestic and international concerns. When he joined the Senate 22 years ago, Hagel maintained close personal friendships with several Democratic colleagues. Bi-partisan friendships helped lawmakers in Washington get things done to benefit the American people.

Americans often bounce “from crisis to crisis at a manic pace,” Hagel said.

The first Vietnam War veteran to serve as U.S. Defense Secretary, Hagel aired his views on important topics as fresh as today’s headlines, said MC student Chandler Key of Clinton. “The issues were timely. He summed up America’s role in the world.”

“He is considered somewhat of a maverick Republican. He is one willing to speak out against politicians of either party when he believes they are misguided in the policies they advocate,” Antizzo said.

Hagel earlier Tuesday addressed students at the MC School of Business. “He had a good grasp of the issues,” said MC student Bryant Grove, 19, of Brandon. “I may not agree with everything he said.”