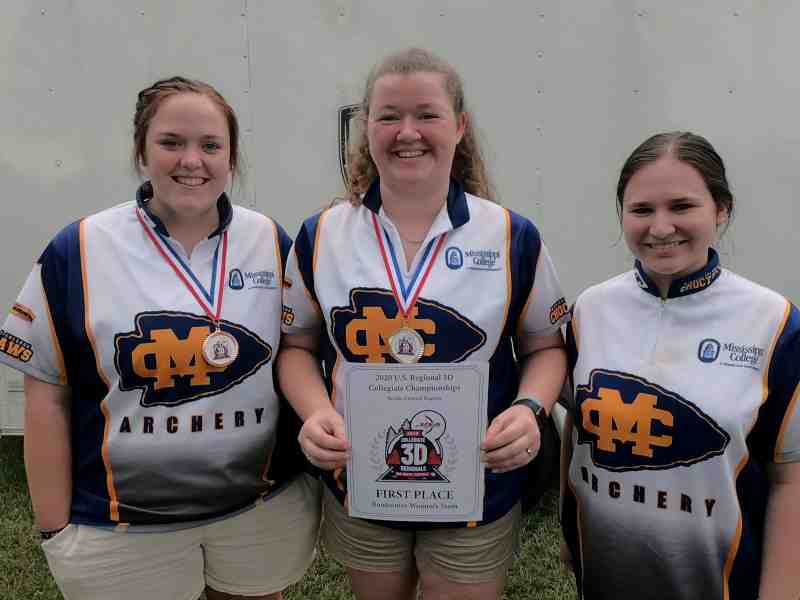 Mississippi College archers shared their passion for the sport with a statewide radio audience.

Members of the elite Blue & Gold squad took a break from practice on November 12 at a new archery range at Clinton’s Traceway Park to field Turner’s questions.

MC students Emily Hootsell, Kathryn Freeman, and Allison Freeman say they first tested their skills shooting bows & arrows at the Adams County 4-H program in Natchez. That was nearly a decade ago. And their interest kept growing.

Turner, host of the “SuperTalk Happy Hou” show on 97.3 FM in metro Jackson, congratulated the Lady Choctaws on their successful showing at the championships in Alabama last month.

“What you are doing is awesome,” Turner told the talented women from Mississippi College. For sure, they are making a positive impact on encouraging young girls to give archery a try in the Magnolia State.

When Allison, Kathryn, and Emily first picked up bows as young girls in Natchez, they never envisioned they would compete on one of the South’s premier collegiate archery teams.

Taking aim at their sport’s targets in the trees, such as lions, bears, alligators, deer, or pigs, takes a great deal of practice year-round, the MC archers said. Concentration is a key element.

About 90 percent of the sport requires handling one’s nerves while shooting at targets 20 yards away, the students say.

Emily Hootsell sees plenty of benefits to her favorite sport. “You make friends with people from other schools.”

MC’s fall 2020 outdoors season is over. But now team members are practicing for the 2021 indoor competition. Coach John McDonald says MC archers will travel to tournaments in Lancaster, Pennsylvania, Las Vegas, Nevada, and Hattiesburg from late January through the final week in February.

Mississippi College’s archery team consists of 20 student-athletes. Some students are graduating, so the head coach is always recruiting new talent.