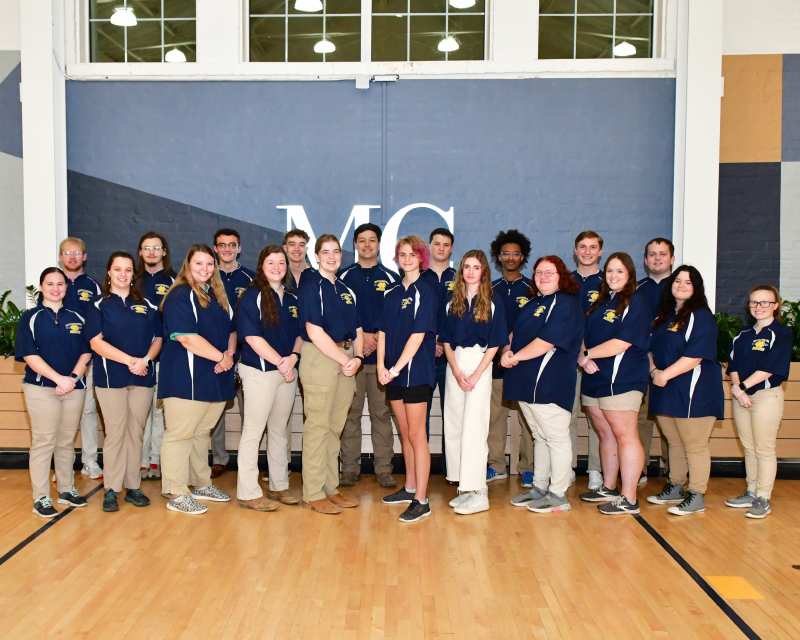 To be successful in the sport of archery, an athlete must demonstrate extraordinary precision, unmitigated determination, and exceptional control.

Just as Anna Carraway started to shoot during a tiebreaker in the women’s bowhunter competition at the USA Archery 3D National Championship, the Mississippi College archer noticed her engagement ring was missing from her finger.

“I was distracted,” said Carraway, a second-semester senior from Wesson who will receive her Bachelor of Science in Nursing from MC in December. “Half the team was supporting me, while the other half was helping look for my ring with a metal detector.”

She tried to regain her composure, eyed the target, and let her third arrow fly. It struck the mark, which would have guaranteed that MC’s women’s bowhunter team would get to compete for silver or gold.

The only problem: she had hit the wrong target.

Instead of battling for first place, the team shot for bronze, and ultimately finished in fourth. Nevertheless, it was a remarkable showing on the national stage, but failing to medal left Carraway wondering what might have been.

“We didn’t make the finals because of that arrow,” she said, “but my teammates were supportive. The archery team, we are all friends, almost family. We all care for each other, we have a great time on our trips, and support each other in all areas of our lives outside of archery. We’re always encouraging each other to do the best that we can.

“Everybody on our team are some of my best friends, and I am so thankful for all of them.”

Abigail Veidmark, a sophomore premed major from Phoenix, Arizona, called the opportunity to compete in archery tournaments while pursuing her degree “a dream come true.”

“It’s always so exciting getting to compete in tournaments,” Veidmark said. “Meeting other archers on the team, getting to know them, building friendships, and knowing all of us are dedicated and committed to the sport we love is great.

“We all enjoy being able to shoot together. Everyone wants to step up their game and do well at the tournament level for each other.”

The MC archers’ spirit of camaraderie has been carefully cultivated by their head coach, John McDonald, who helped guide the team through a fall 3D season that saw them make impressive strides. In a 3D archery competition, archers mimic the hunting experience by shooting at three-dimensional targets of various sizes designed to look like animals. The targets may be arranged along an outdoor course resembling a hiking trail.

“All of the archers showed steady improvement throughout the practices,” said McDonald, who is in his fourth season as head coach of MC’s Archery Team. The Jackson native represents Mississippi in the U.S. Collegiate Archery Association and has more than 30 years of experience in archery. “Their scores steadily climbed from practice to practice and from tournament to tournament. Almost every archer showed a substantial increase in their shooting ability throughout the season.

“Our kids balance their studies and practice time and faced stiff competition this year.”

“Progress-wise, the team continues to get better,” Veidmark said. “There’s continual growth we can always strive for. I’ve been thinking about and aspiring toward the competition we get to have here since I first picked up a bow.

“There’s so much of the Lord’s plan in all of this. Who would have thought I’d be here in Mississippi competing on the collegiate tournament level and performing well for my team, for my school, and for myself? It’s absolutely thrilling.”

Veidmark and her teammates collected seven medals during the 3D Regionals. Shooting their way to gold were Veidmark, who finished first in the women’s compound division; Lexi Harris, who won the women’s bare bow division; Emilia Miceli, Carraway, and Ann Mabry Dean, who took the top spot in the bow hunter women’s team division; and Veidmark and Ben Spears, who combined to win the compound mixed team competition.

At the Collegiate 3D Championship, Miceli, Carraway, and Dean finished first, second, and third, respectively, in the female bowhunter category, while Veidmark won the female compound competition. Other medalists included Harris and Katelyn Page, who finished second and third, respectively, in the bare bow women’s division; and Spears, who took third place in the male compound category.

Then there was the women’s bowhunter team, which came so close to earning a national medal.

“The coach for the University of the Cumberlands team said he was holding his breath because our girls were shooting extremely well,” McDonald said. “They won the overall championship, as well as that particular division, but we’ve been making him look over his shoulder every year.”

MC’s archers might not have gone home with a national medal, but they did manage to find Carraway’s ring.

“The team is progressing,” Carraway said. “Seeing how much we’ve improved over the last four years and having people on the team who love archery and are willing to put the time into working to improve is outstanding.

“I couldn’t be more proud of them.”