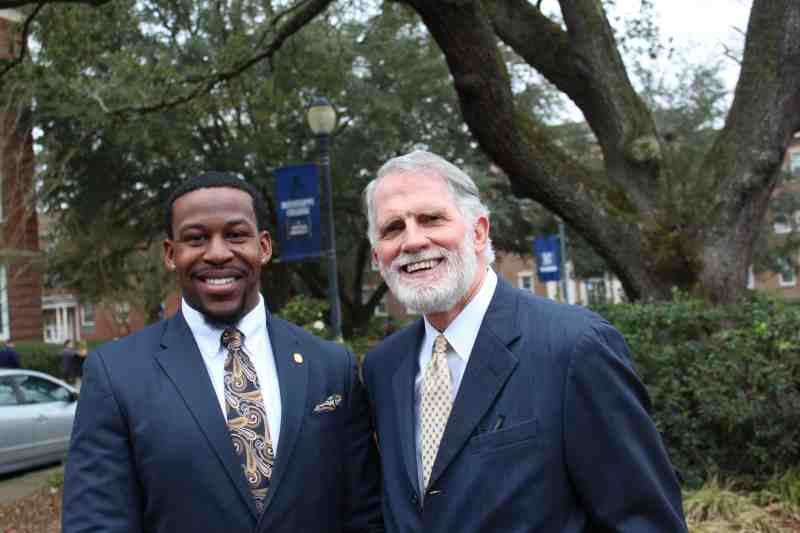 Sharing common bonds like a strong faith, and an abundant love for Mississippi College, two Mississippians developed a nice friendship. Differences in their race, and an age gap of four decades didn’t stand in their way.

A Ridgeland attorney, Taggart serves his alma mater on the university’s Board of Trustees.

Anthony Jackson, 22, played football at John F. Kennedy High in Mound Bayou and that led the Deltan to pursue an MC diploma. First enrolling on the Clinton campus in 2015, the political science major played for the Choctaws three seasons.

The resident of an all-black Delta town became the first African-American serving as Student Government Association president on the Clinton campus. Mississippi’s largest private institution, MC dates back to 1826.

Last Spring, Jackson’s election made history at the Baptist-affiliated university.

That fact didn’t escape Taggart, a former SGA president and co-author of two books on Mississippi politics. The former Madison County supervisor first met Jackson at a Choctaw Fanfare event in August. Their friendship blossomed ever since.

While making school history is notable, Andy is impressed with Anthony for other reasons. “He is also a man of faith, a top student, an athlete and a gentleman.”

The two men hail from different parts of the Magnolia State. But they point to much in common. “Our stories have a lot of similarities: we’re both products of families of faith, and we grew up in small towns, with blue-collar backgrounds,” Taggart said. “We are products of public schools.”

It was about 40 years ago, when Taggart was elected MC’s SGA president. Communications were far different. There was no Internet. There were no Twitter or Facebook accounts. MC students weren’t glued to cell phones back then.

More than four decades ago, Andy Taggart played tight end at football powerhouse Moss Point High. But the Gulf Coast native never suited up for the Choctaws. The 1979 MC graduate went to work for the Mississippi Republican Party in 1980. A 1975 Moss Point High graduate, Taggart turns 62 in May.

Over the past year, MC leaders like Taggart, President Blake Thompson and administrator Jonathan Ambrose served as Anthony’s mentors.

Jackson appreciates having these men to turn to. He relishes what the university has meant in his life.

“Mississippi College not only gave me the opportunity to compete athletically, but also afforded me the chance to be challenged academically and to grow stronger in my faith,” Jackson said.

Anthony is never bashful about cheering for the Blue & Gold at football and basketball games. He’s constantly boosting MC pride and team spirit. He’s got the skills to unite people. He’s supported MC causes like the student dance marathon. The 2018 event raised than $43,000 to benefit the Blair E. Batson Children’s Hospital in Jackson.

The sky’s the limit for Anthony, friends say. “The charisma and character he has is contagious and people like that,” says Aaron Feazelle, SGA chief of staff from Diamondhead. “His pride and love for Mississippi College run high,” he said. “I believe what makes him a great student leader is his ability to relate to anyone.”

Year-round, he’s an energetic MC ambassador. A Mississippi College degree, Jackson said is “well-respected,” in a community that allows students to “openly profess their faith.”

Getting to know Andy Taggart helped Jackson advance his own spiritual journey. “Andy is a prime example of what it means to be a faithful servant of God’s word,” Anthony said. “As Andy pointed out, this friendship is a true testament of how we should continue to use the love of Christ to bring people together.”

Dr. Ambrose salutes Anthony Jackson for his “knack of leading from his heart, while still casting a vision…he leads with integrity.”

His ability to unify people, says the assistant vice president for student affairs, will be one of his lasting MC achievements.

Taggart predicts his friend will succeed as he pursues a law career. “He has a heart for public service, which I greatly admire.”