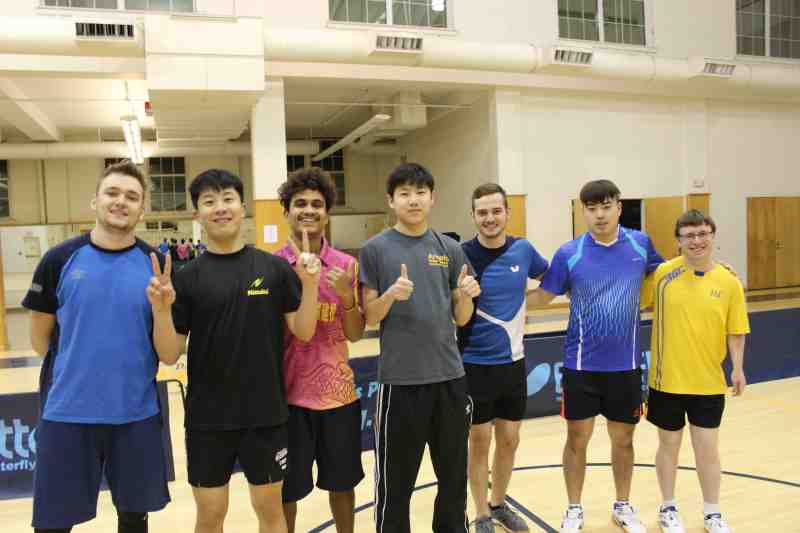 Mississippi College table tennis team players take a break at a January 16 practice at Alumni Gym. Players (from left to right) are Vladyslav "Vlad'' Totkalo of the Ukraine, Tomotaka "Tomo" Yoshitomi & Harry Sharma, both of Japan, Qingwei Sun of China, Caleb Shipman of North Carolina, Xiang "Ali'' He of China along with Jeremy Gore of Dallas, Texas. Ranked No. 3 in the nation last season, MC hosts the 2019 Dixie Division tournament on the Clinton campus February 2. Visiting teams from Mississippi State, Alabama, and South Alabama will battle MC starting at 9 a.m. that Saturday at Alumni Gym. The public is invited.Admission is free.

With 44 million people, the Ukraine is a large Eastern European country the touches the Black Sea coastline, and borders countries like Poland, Belarus and Romania.

Coming from Kakhovka, a small city of 25,000 people, Vladislav Totkalo recently became the first player from the Ukraine to join the Mississippi College table tennis team.

Showing up for practice at Alumni Gym for the first time January 14, “Vlad” enjoyed hitting with new teammates from China, Japan, and the USA.

The seven-man Mississippi College squad is preparing to host the Dixie Division tournament on February 2 at Alumni Gym. Teams from Mississippi State University, the University of Alabama and South Alabama are traveling to the Clinton campus for the games. Action that Saturday begins at 9 a.m.

Beyond that, MC expects to advance to the regionals at Texas Wesleyan University in Fort Worth March 9-10. The 2019 National Collegiate Table Tennis Championships will be in Greensboro, North Carolina in April. “We have another awesome team this year and Mississippi College will make some noise at the Nationals once again,” said Andy Kanengiser, the squad’s sponsor.

Away from slamming hollow white table tennis balls, Totkalo hits the books as a sports management major at the 5,138-student Baptist-affiliated university.

He’s thousands of miles away from his family who live about a four-hour drive from Russia and eight hours to Kiev. But after a few days, he feels settled into apartment living near Mississippi College. In most Slavic languages, “Kraina” means country or land. And the talented table tennis player believes he landed in the right spot. Vladislav joins a stellar MC Choctaws squad that finished last season ranked third in the USA.

Besides the Olympic sport of table tennis, Vlad is passionate about soccer and basketball. After spending two years in Toronto, he cheers for the NBA’s Toronto Raptors. Totkalo closely follows all the big stars around the league. From Steph Curry of Golden State to LeBron James of the LA Lakers and James Harden of the Houston Rockets, he loves watching NBA superstars on TV.

While the Ukraine’s capital city of Kiev, the gold-domed St. Sophia’s Cathedral and his country’s beautiful mountains are far away, Vladislav Totkalo likes what he sees of Mississippi. He speaks very good English.

The MC table tennis newcomer joins veteran table tennis standouts Tomotaka Yoshitomi and Harry Sharma, both of Japan, along with Qingwei Sun & Xiang “Ali” He, both of China. MC students Jeremy Gore of Dallas, Texas and Caleb Shipman of North Carolina round out the Blue & Gold. MC graduate Zhicheng “Johnson” Liang is in the middle of his second year as the coach. Retired Texas businessman Dr. Louis Lau (MC Class of 1965) has served as the squad’s generous donor for a dozen years.

Table tennis remains king in China, but the sport is growing across the Ukraine. The weather gets brutally cold in the Ukraine during the winter months, so table tennis offers a pretty competitive option indoors. Totkalo’s father got him interested in sports.

In his third year on the team, Jeremy Gore recently competed at the U.S. Open in Orlando, Florida. There were numerous events in late December for players from a variety of skill levels.

The MC junior again participated in Para program matches. Jeremy earned a Silver medal in the Para Class 8 event by defeating opponent Navin Kumar of Maryland. He lost his match to eventual gold medalist Marco Makkar of New York. Makkar is ranked 65th best in the world in Class 8.

Gore took part in the Para event serving as the qualifier for the Pan American Games in Peru in 2019. Jeremy has Ostechondoma or the most noncancerous bone growth. It affects the range of motion in his wrists and how fast he moves his legs while playing table tennis.

Returning to Mississippi College after a valuable U.S. Open experience, the accounting major from Texas will keep paddling to get better. “I will continue to practice, improve and develop my game.”

An “A” student, Jeremy Gore also finds time to work as a part-time employee at the Chick-fil-A restaurant in Clinton.