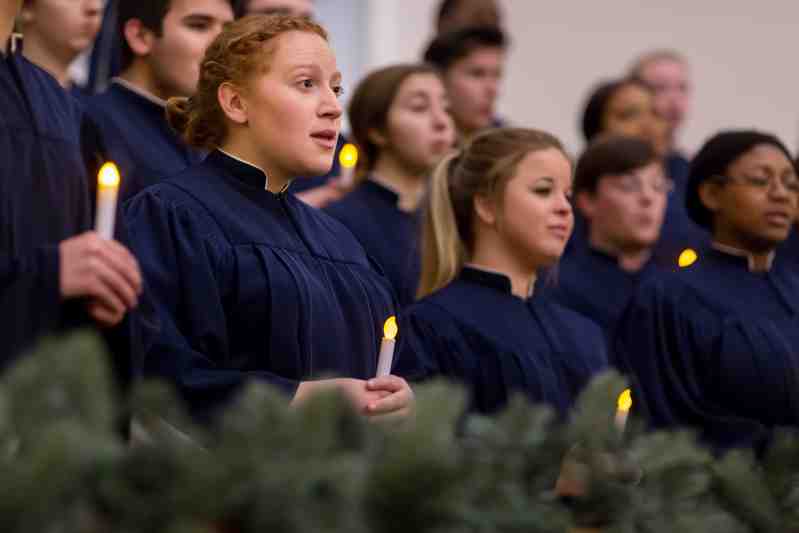 Mississippi College Singers perform at the 2018 Festival of Lights.

Mississippi Public Broadcasting television audiences will see the 2018 Festival of Lights production on the Clinton campus beginning in late December.

MPB partnered with Mississippi College for the third consecutive year to air the program taped at Provine Chapel. Led by performances of the MC Singers, the Festival of Lights spreads the message of Jesus Christ through scriptures, prayers and songs.

The 33rd annual Festival of Lights broadcast dates are December 20 and December 22 at 7 p.m. The final 60-minute broadcast is set for MPB stations starting at 4 p.m. on Christmas Day, December 25.

MPB audiences will again tune in across state lines. Viewers in Tennessee, Alabama and Louisiana can pick up the MC Singers Festival of Lights performances, says MPB public relations director Mari Irby. Quite a few viewers enjoy watching the Christmas concert from their homes in the Mobile, Alabama area, she said.

“It’s unbelievable that this ministry can reach out to this many people,” says sophomore Hunter Cannette, 19, of Pascagoula, a member of the MC Singers.

Since the show will be broadcast statewide, the Pascagoula High graduate says his grandfather will get the chance to watch the Festival of Lights from his Gulf Coast home.

The 2018 Festival of Lights featured a number of traditional Christmas selections as well as the Russian piece “Salvation is Created.” Mississippi College choral music director Mark Nabholz serves as conductor of the award-winning MC Singers.

“The collaboration of the MC Music Department and MPB was a joy in every way,” said Angela Willoughby, who chairs the department.

At the conclusion of the MC Singers performances, President Blake Thompson delivered brief remarks to audiences watching the MPB production.

Students watching the program live at the Christian university’s historic Provine Chapel were impressed with the performances to celebrate Christ’s birth. “I like that it is very traditional – it’s been that way for 33 years now,” says MC senior Tyler Quertermous of Madison.

For more information, go to www.mpbonline.org