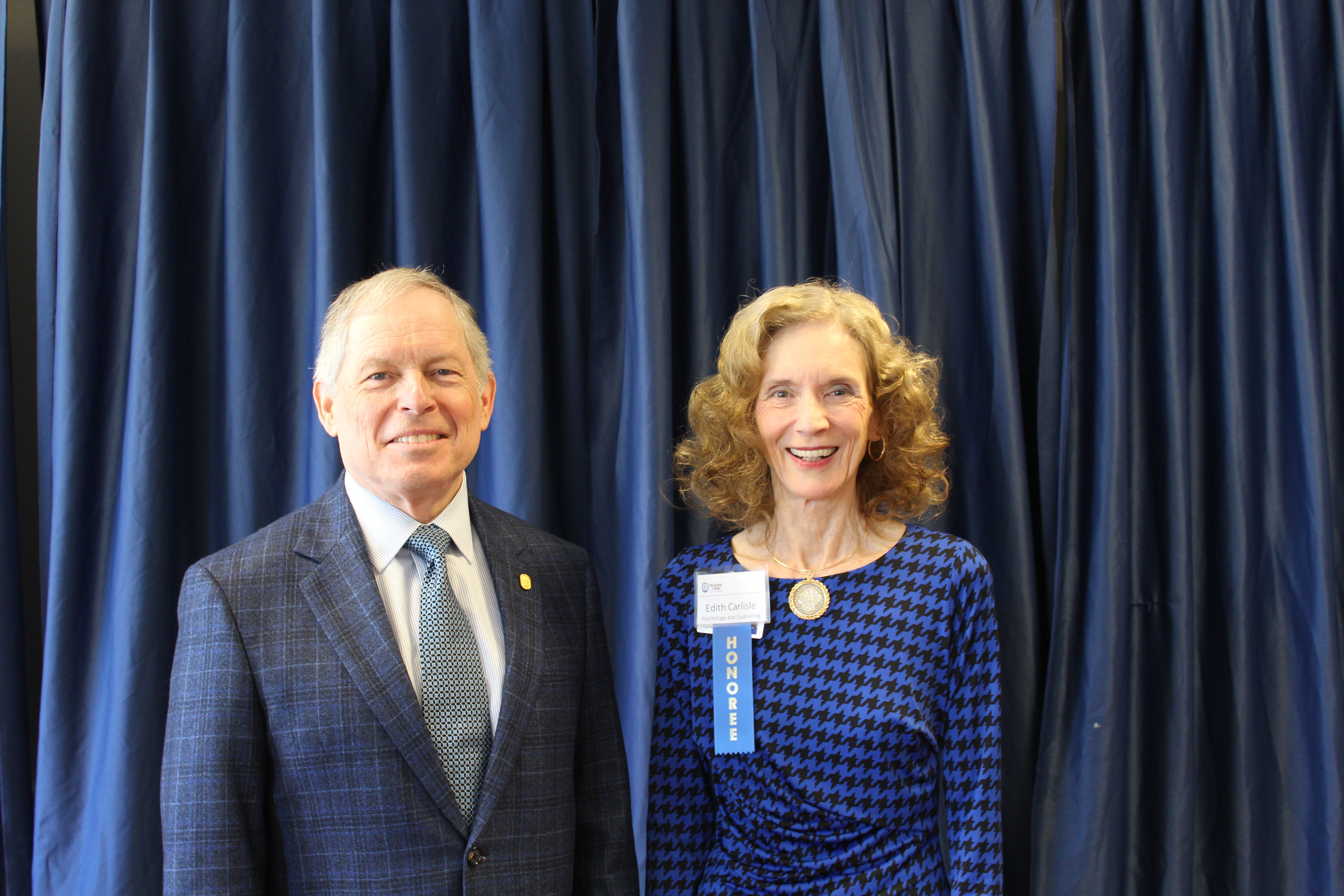 President Lee Royce and MC professor Edith V. Carlisle are pictured at a retirement reception on the Clinton campus. Dr. Carlisle has served the education and counseling profession in Mississippi for almost 50 years.

Dedicated to her profession for decades, Dr. Edith Carlisle is retiring after 18 years as a Mississippi College educator. The award-winning professor served as coordinator of the school counseling program. She wins accolades from her colleagues at the Baptist-affiliated university.

“Her intelligence, enthusiasm and knowledge have set the standard very high for the counseling professionals who follow her,” says MC professor Janis Booth.

Mississippi College leaders honored Carlisle along with other faculty and staff at a March 22 reception.

Carlisle was among 11 MC retirees recognized for their dedicated service. One of them is retiring MC President Lee Royce.

A professor with the MC Department of Psychology and Counseling, the Mississippian began her career as a school counselor in Tupelo. Dr. Carlisle will always be remembered by her students for her “amazing accumulated knowledge” in the field equipping them with professional skills to succeed, Booth said.

Carlisle earned her doctorate in counseling psychology at the University of Mississippi in 1978. She taught at Ole Miss, Mississippi State, Troy State, Murray State and finally, Mississippi College. Carlisle served on the governing council of the American Counseling Association. At MC, the Ridgeland resident served on the editorial board of two national counseling journals.

Other retirees include English professor Jim Everett. The son of a master sergeant in the U.S. Air Force, Everett served in the Air Force and excelled as an educator. He worked as a writing instructor in Aerospace Studies Management.

Jim earned his doctorate from the University of Washington in 1994 with a dissertation focused on Victorian travel writing. He joined the MC English Department in 1996. Jim served as director for graduate studies in the English Department for over a decade. He was honored with MC’s Distinguished Professor Award in 2011. Everett and his wife, Bonnie, live in Clinton.

Also retiring is Susan Newman, who began her career at MC libraries in 1978. In 2004, she was named coordinator of reference and instruction at the Leland Speed Library.

Few people know it, but Susan made history in 1973 when she was among the first two women to join the Georgia Bureau of Investigation. Fast forward to MC in 2012, and Susan helped write and carry out the campus information literacy initiative known as U-research.

“I loved working with students, helping them with their research needs and listening to them as they often just needed someone to talk to,” Newman said. “I am proud when I see our graduates in fulfilling careers and as they serve God in their communities.”

In her leisure time, the Hinds County resident will spend time with her family, travel and enjoy life on her farm.

Other retirees are Judy Graham, an integral part of MC computer services for almost two decades; Judy Hamilton, who began working as a graduate assistant with the Department of Mathematics and Computer Sciences in 1990, is among them. In 2004, Hamilton became secretary of the Mathematics Department.

Connie Blackmon, who began work at the MC Mailroom and Print Shop in 2001, is stepping down, too. A Raymond native, John Johnson retired in 2017 after 19 years with the General Services Department.

In retirement, Becky and her husband, Charles, will visit their children and grandchildren in Tennessee and Florida.

A plumber for the MC Mechanical Department the past 14 years and housekeeping supervisor for six years, Bill Elmore will retire to his Clinton home. He and his wife, Dana, will keep up with their two children and two grandchildren. Riding his motorcycle, fishing and playing golf are part of Bill’s priorities for years to come.