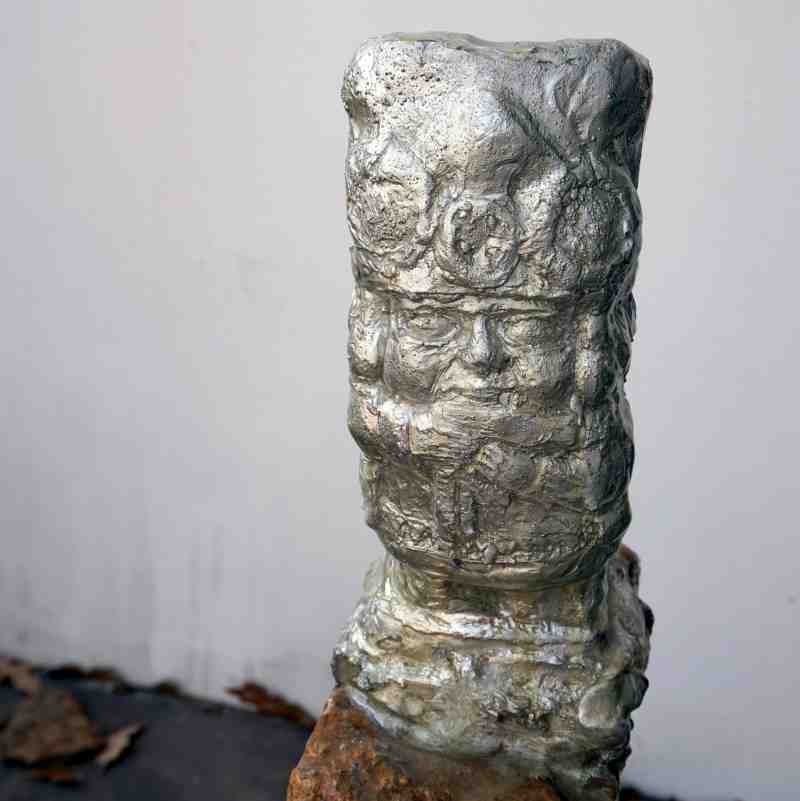 Featured in the splendid Sculpture Garden at the Gore Galleries, the 2021 piece is part of a multimedia series for adults with special needs.

The MC art graduate cast metal on limestone to create the thought-provoking artwork. The Inca in the series features a map utilized to save the world. A character discovers the map at an underwater school modeled after his alma mater in Clinton. The Inca civilization arose from the Peruvian highlands in the early 13th century and extended across western South America.

“I create works of art based on people and objects I love,” Maxwell says. The first sculpture by the Kansas City resident was inspired by one of his family’s pets. That work was created from mud scooped up from a river in southern Louisiana.

“I work in a variety of media, primarily creating large-scale work with a purpose centering around causes that are close to my heart, including autism and special needs awareness.”

His spring addition to the Sculpture Garden at the Christian university is well-timed.

April marks the United Nations-sanctioned World Autism Month. Activities focus on increasing the understanding and awareness of people with autism. What is autism? It is a serious developmental disorder impairing the ability to communicate and interact. It can last for years or span a lifetime.

His latest lifelong project is titled “The Weeb” and awaits a fall showing. This series is based on an unlikely character tasked with saving the universe.  His work combines 3D animation, stop motion, and other innovative methods.

A native of Muncie, Indiana, Robert Maxwell earned his bachelor’s degree at MC in 2004 and received his master’s at the Baptist-affiliated university in 2009.

The outdoors Sculpture Garden is one of the premier destination points for Mississippi College visitors to the Gore Galleries. The beautiful arts venue is named for the late Sam M. Gore. The Founding Father of the MC Art Department in the late 1950s, Dr. Gore has received international acclaim as a Christian artist and served as a mentor to generations of art students.

Robert Maxwell works long hours at his craft but makes family time a top priority, too. He and his wife and two sons are a close-knit family living in Missouri. Family members, he says, are “my greatest loves and the subject of the majority of my work. I am nothing without them.”

His art pieces can be seen around the USA. His “World Reader” white marble work was first featured at Temple University in Philadelphia, Pennsylvania, in 2020. His "Fallen Fire Fighter Memorial” is a life-sized mixed media work on display at a Fire Department in Slidell, Louisiana. His life-sized bronze bust of the late Dr. Wallace Conerly is a tribute to the longtime vice-chancellor at the University of Mississippi Medical Center in Jackson. The piece made its debut at UMMC in 2009.

Randy Miley is proud of the achievements of this remarkable MC graduate with a servant’s heart.

“Robbie has worked in the mission field and uses sculpture as a means to reach exceptional children,” Miley said. “He has worked in several countries, including Peru.”

Maxwell joins many in the Blue & Gold family who polished their skills as artists at Mississippi College's Art Department, Miley noted. "They all share a love for MC and a passion for using their talents for service to the Lord.”