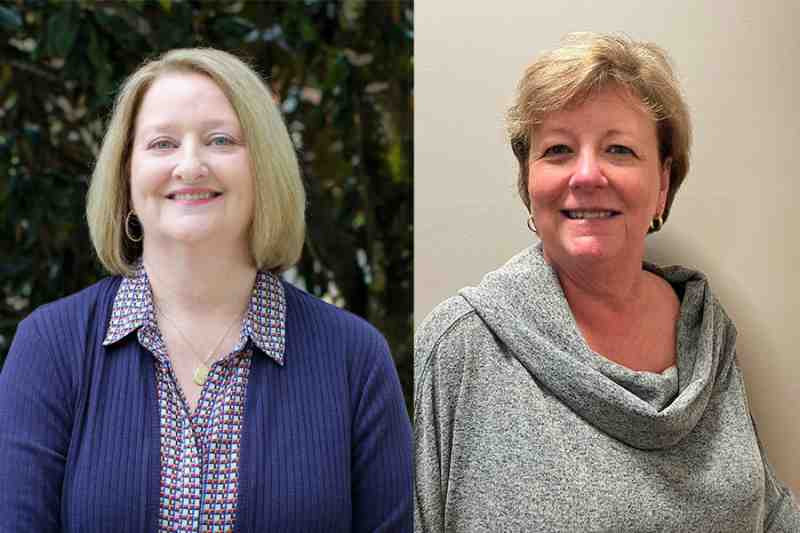 Cindy Hampton, left, IT systems analyst in the Office of Information Technology, will be recognized for 45 years of service - and counting - while Karon McMillan, director of financial aid, will be congratulated for retiring after 20 years of service during MC's 2022 Faculty and Staff Retirement and Service Year Celebration March 22.

Cindy Hampton first reported for work at Mississippi College on her birthday as a rosy-cheeked newlywed who had only recently graduated from Hinds Community College.

Five weeks earlier, Hampton and her husband had been married in historic Provine Chapel on the Clinton campus where countless young couples have “tied the knot.” At the time of her wedding, though, Hampton had no real connection to MC.

She had applied for a position in the Registrar’s Office upon the urging of her downstairs neighbor, who was serving as a secretary to then-registrar, Nan Sibley. When Hampton arrived at the Christian University, there wasn’t a single computer on anyone’s desk: all business was conducted face-to-face with faculty, staff, and students.

“I loved working in the Registrar’s Office,” Hampton said. “You knew all of the students, the faculty – everyone on campus. It was not automated. You were hands-on. It was much more personal.”

Were she to have peered 45 years into her future at MC, Hampton might have been startled at what she would have seen. Not only is there a computer on her desk, but Hampton trains faculty and staff on how to successfully navigate Banner and many of the other software systems essential to the University’s day-to-day operations.

It was a career trajectory altered by Hampton’s own talent. While working in the Registrar’s Office, she was also serving as a project leader for Banner implementation efforts when, in 1998, the Office of Information Technology hired her to train new employees on Microsoft products and provide functional support for Banner.

She has been in IT ever since, although she continues to work with the Registrar’s Office, implementing and upgrading software for student use. She is also continually involved in providing functional support for all administrative offices that use Banner and, most recently, assisted Foundations and Alumni with their migration to Slate.

In a thriving career of four and a half decades and counting, Hampton said she is never bored.

“It’s been a pleasure working here,” said Hampton, who lists Sibley, Dr. Charles E. Martin, former longtime vice president for academic affairs, and Dr. Edward McMillan, former dean of Graduate Studies and professor of history, among those who have served as outstanding role models early in her career. “I’ve grown up in a blessed environment with so many great people.

“MC is a good, Christian place to be, and I’ve not wanted ever to leave.”

Hampton and others achieving milestone years at MC, as well as their colleagues who will be retiring or receiving special service awards, will be acknowledged during the 2022 Faculty and Staff Retirement and Service Year Celebration at 11 a.m. on Tuesday, March 22, in Anderson Hall in the B.C. Rogers Student Center.

Among the retirees to be acknowledged is Karon McMillan, director of financial aid, whose father, Van “Doc” Quick, is the namesake of MC’s Distinguished Staff Award that will be presented to a staff member during the celebration.

Quick, a 1955 alumnus and longtime administrator, was highly regarded by the MC Family as a “goodwill ambassador” and a “walking encyclopedia” of all things Blue and Gold. He served nearly 40 years as dean of men, director of admissions, and vice president for alumni and student affairs before retiring in 1999. He died in 2014.

“My Dad loved this institution,” said McMillan, who is set to retire on May 31. “He loved the students that attended MC while he was employed. He also loved the athletic department.

McMillan had grown up watching her father serve as the face of the University for decades. A 1981 graduate of MC who was teaching part-time, she decided to apply for a position at her alma mater – without telling her famous parent.

Taking a page from her father’s stated outlook, McMillan came to the aid of one student in particular, personally providing endowment money to help cover her Business Office balance. When McMillan told her about the donation, the student began to cry.

“She said she wouldn’t have to sell candy out of her trunk to help pay for college,” McMillan said. “The blessings in my job are many. It is a blessing seeing students get their degrees, after we have helped them with financial aid.

“I hope that I have made my Dad proud.”

None of the honorees has served MC longer than Hampton, who has raised a son and a daughter since beginning her career and harbors no designs about retiring just yet.

“Looking back over my career, some days I ask, ‘How did I get here so fast?’” she said. “When you work with computers, everything’s so fast-moving. I’m very involved with the staff we hire, I’m part of faculty orientation training every fall, and I take part in a lot of new systems implementation projects.

“I’ve been here through four presidents and two interim presidents, and I’ve made so many lifelong friends at MC. People are just so kind and nice and willing to help. It’s just been a privilege to work here, and God certainly has blessed me by letting me be here.”