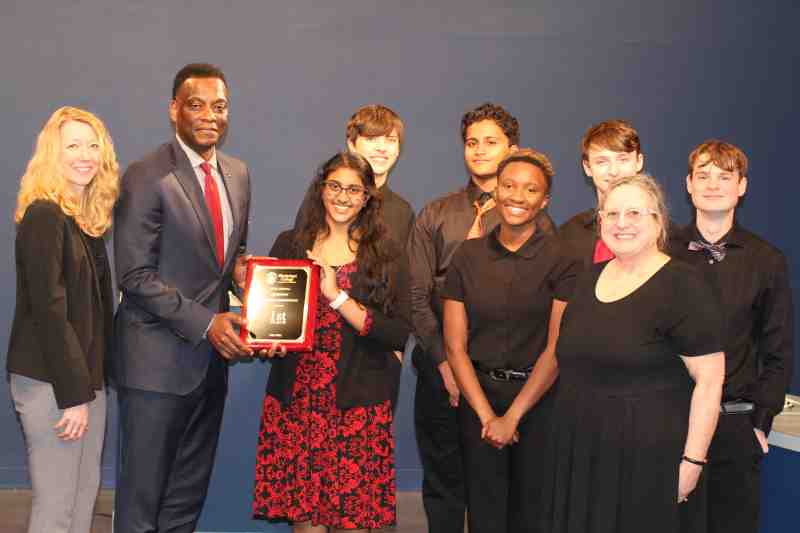 Dr. Keith Elder, provost and executive vice president at MC, presents the Mississippi Academic Competition championship plaque to members of the Clinton High School team after its defeat of Madison Ridgeland Academy in the tournament finale Feb. 22 in the Leland Speed Library. Cheli Vance, left, program coordinator in the Office of Continuing Education at MC, served as host of the tournament.

Which word, sometimes used to designate anything that reflects or indicates change, means the instrument used to measure atmospheric pressure?

Identify the first secretary of state to become president.

Some of the most difficult questions in science, mathematics, history, and the arts to answer without the assistance of a Google search were mere child’s play for participants in the 38th annual Mississippi Academic Competition at Mississippi College.

After spending several weeks advancing through a grueling tournament bracket against some of the brightest minds representing 18 public and private high schools throughout the state of Mississippi – and one team of home-schooled scholars – four quarterfinalists emerged for the final rounds of the competition Feb. 22 in the Leland Speed Library studio.

The six Clinton High team members and their sponsor, Nancy Dent, smiled broadly as Dr. Keith Elder, provost and executive vice president at MC, presented them with a plaque signifying their academic competition victory. It was the school’s third tournament championship in the 12 years Dent has served as its academic team sponsor.

“This was a tough competition. Everybody we played has known their stuff,” said Dent, who teaches English at Clinton High. “This is a great opportunity to let the kids see what they know. These are our future leaders, and we need them to be knowledgeable.”

The secret to Clinton High’s success in the competition? Preparation. Dent said the team practices once a week after school.

“What I know about my team is they are so diverse, but they love each other and love being together. This group of kids is remarkable.”

Cheli Vance, program coordinator in the Office of Continuing Education at MC, served as host of the tournament. Before the final round began, she reminded the competitors of the annual competition’s purpose.

The tournament at MC has been a mainstay of high school academic competitions throughout the state for close to four decades. According to Ken Gilliam, MC’s director of continuing education, the event draws young scholars to the Clinton campus, where, between tournament appearances, they get the opportunity to tour the University, interact with faculty and staff, and learn about the benefits of obtaining a world-class Christian education right in their own backyards.

“We get absolutely the smartest kids from all these schools around the state in this competition,” Gilliam said. “We encourage them all to become familiar with our campus, have a meal here, and talk to our students. It’s always been a positive experience for them to be here and compete.

“We’ve had several students who’ve participated in this competition and come to school here.”

Dent said she would like for some of her award-winning scholars to remain in Clinton while pursuing their collegiate studies.

“I would encourage our kids to come to MC, because there are so many strong academic programs here,” she said.